The extraordinary story of Deia-born cult album Book of AMAugust 10, 2015

Part I: A Strange Discovery

I first heard about the Book of AM from Lali, who lived in Deia throughout the 1970s. Except she couldn’t remember the name of the album. She just knew she’d sung on something or other. It was only when I saw a dog-eared copy of the Book of AM in my friend Dave Templeton’s collection of Deia-related vinyl that I realised this was what Lali was talking about. 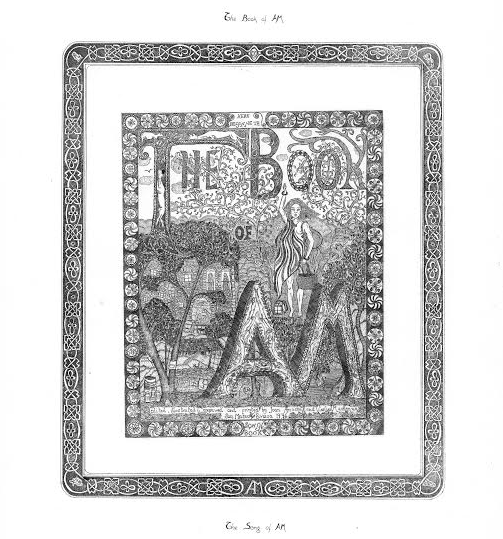 The Book of AM has four parts so it seems right that my telling of the Book of AM story should also be in four parts, or blog posts.  If you can’t wait and want to read the story all at once, please download the PDF version.

I wish I was

I was with Lali Shepherd for seven years, until, far too young, she passed away.  We both loved to sing. On long car drives, we’d try and harmonise on country songs like Gram Parsons and Emmylou Harris’s “Love Hurts” and George Jones and Tammy Wynette’s  “Golden Ring”.

I still can’t listen to the Irish traditional song “Carrickfergus”, which Lali loved to sing – theatrically taking a sip of her wine when she came to the line “But I’m drunk today and I’m rarely sober”.

I sang in a band called The Moneyshots.  Our crowning moment was playing at the Christmas disco in a home for mentally disabled people run by a friend of mine. It was the only time we didn’t empty the room. Midway through one song, when I was trying for a Jim Morrison moment, a woman grabbed the mic and started making bird noises. She was better than me.

We didn’t play much but we rehearsed every week. The band would get stoned, I’d get drunk and we’d do what boy-men love to do: make an incredibly loud noise in a tiny space.

When I went out to rehearse, Lali would grab a bottle of red wine and a joint, stand at the top of our stairs and sing her heart out. I only found out when I noticed burn marks on the carpet from what she called ‘dropsies’ – burning embers from her joint.

I always thought it richly ironic that I, who couldn’t really sing, fronted a band while Lali, who could really sing, was too shy to perform in public unless she’d had at least half a bottle of wine.

Earlier this year, when Deia character Phil Shepherd passed away, Dan, one of his and Lali’s twin sons, found a copy of the Book of AM among his things. Phil, too, played and sang on the record.

It felt like time for me to tell the true story of one of the most wonderfully inspired records ever made. In Deia or anywhere. I started with Dave. He put me in touch with Jerry Hart, who played on the Book of AM and so it began.

Once upon a Gong fan

Winter 1977 and punk is in full sneer. Living in the bitterly cold north of England, Jerry Hart is feeling very much in the wrong place at the wrong time. Then Jerry meets Tony Bullock, a bamboo flute player and fellow Gong freak. The pair decide to trek to Deia where they’d heard there was a “Gong creative community” with Daevid Allen at its centre.

Jerry and Tony arrived in Palma in February 1978. Disembarking from the ferry they met Carmeta Mansilla who asked the two pale hippies if they knew somewhere good to eat breakfast. To Jerry, “she was a perfect vision of the beautiful hippy girl: flowing Indian skirt, long hair, confident stride”. Carmeta, a fully qualified doctor, invited Jerry and Tony to go with her to visit her brother, jazz poet Fernando Mansilla, in the mountain village of Bunyola.  Days later, Jerry and Tony, accompanied by Carmeta, arrived in Deia.

Jerry takes up the story. “A youthful Sara Raphael directed us to the Bananamoon Observatory, Daevid’s house and studio. We knocked on the door and – miraculously – he didn’t tell us to f–k off (a greeting I subsequently learnt he was very willing to offer to other visiting Gong freaks). Instead, he invited us in then took us up the Puig to No 3, Plaza de la Iglesia which was being rented by a young German couple. Daevid asked them if they could put us up and – miraculously – they agreed. We ended up staying there for about a month.”

Inevitably,  the trio met Juan Arkotxa and his partner Leslie Mackenzie, originators of  the Book of AM who were renting the house next door. Juan and Leslie had named this the House of Am on the Hill (Ca’n Am des Puig) after their own house in Ibiza. The band who recorded Book of AM is sometimes known as Ca’n Am des Puig.

(I must admit, I had thought it was ‘AM’ as in ‘I am’ – some sort of esoteric philosophical statement – and, according to Juan, “AM is the root sound of the Chakras which ascend from Lam to Vam, Ram, Yam, Ham and end with the Om at the top of the head,” so perhaps it’s just serendipity.)

Within days,  Jerry and Carmeta joined the rehearsal sessions of the Book of AM singing the songs from the book and jamming  on guitar, tambura, flutes and percussion with Pat and Stephanie Shepard and Lali and Phil. As did Jean-Paul Vivini, who contributed modernist sounds with a synthesizer.

Juan shared his and Leslie’s idea about developing an album to accompany an exhibition of the Book of AM, a large book of engravings and watercolours they’d created in the style of William Blake. Each engraving incorporated a poem and the whole project was arranged to represent the states of mind a man can go through in a day.

Part two of the incredible Book of AM story next week.

Download the full story of The Book of Am including parts 2, 3, and 4