The Book of AM Part III: An astonishing afterlifeSeptember 10, 2015

When I first pulled Dave Templeton’s copy of the Book of AM out of his vinyl collection and asked what it was, he said “I don’t really know but it’s a collector’s item in Japan.”

Dave’s copy was one of the original albums, first released in 1978, but it was the reissue on Wah Wah Records which came a significant step closer to realising Juan Arkotxa and Leslie Mackenzie’s vision. 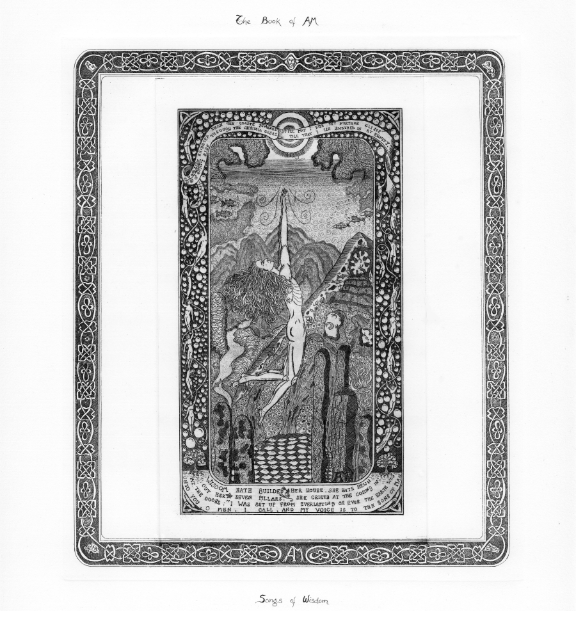 I contacted Wah Wah Records in Barcelona and Marc Argenter of the label told me how the reissue came about.

It seems that Jordi, boss of Wah Wah, is friends with Tomás Graves and knows Deia. In 2004 he met Joachim, an acquaintance of Juan’s from those times who gave him Juan’s address in Scotland. Jordi knew that the original LP was a sought after item in the collectors’ market. When Juan told him he still had the tapes for the 45 minutes of Part I and also the unpublished tapes for another 45 minutes of Part II plus the artwork for the book, which had never been published, they decided the album and book had to be released as originally intended.

Two years later, 500 copies of the vinyl and 500 CD versions of Parts I and II of  the Book of AM were released. The vinyl sold out in pre-orders and the CDs in just a couple of months. The Japanese also produced  a “very nice gatefold mini-LP style CD with a CD-sized full colour book”.

In the Introduction to the book published  by Wah Wah Juan mentioned that the material for Parts III and IV of the Book of AM was still to be published.

Then, Will Z, folk-psychedelic-experimental musician and a member of Belgium’s Cosmic Trip Machine heard the Book of AM. “It was a complete shock for me,” Will says now. “I felt so connected with the music, background and lyrics. The Book of AM influences on my music are strong.”

Will felt so inspired by the Book of AM he decided to work on a similar concept for the third Cosmic Trip Machine album. The Curse of Lord Space Devil used poetry, religious and esoteric texts, including a song Will had written when he was 20 called “Hear the Voice of the Bard” inspired by William Blake. Realising he’d been connected to AM without even knowing it, Will changed the title to “Hear the Voice of the AM” and, in 2010,  sent the finished album to Juan and Leslie. “They loved it and asked me to help finish Parts III and IV of the Book of AM, using for the most part, the original musical ideas Juan had saved from the recordings done in Deia back in 1977.”

Juan sent Will the tapes of the sessions originally recorded in Deia. Will recorded basic tracks (mainly acoustic guitars, Korgi synth and percussion), trying to stick as closely as possible to the sound on the original tapes and albums.

In July 2011, Will went to Scotland, met Juan and Leslie and worked with them. Juan recorded flutes, violins and vocal lines and Leslie vocals and percussion. In February 2012, Leslie, Juan and Will met again at Carmeta’s house in Soller to record her vocals and Will discovered “Carmeta’s voice was still astounding.”  The next revelation was his visit to Deia with Carmeta, Leslie and Juan. 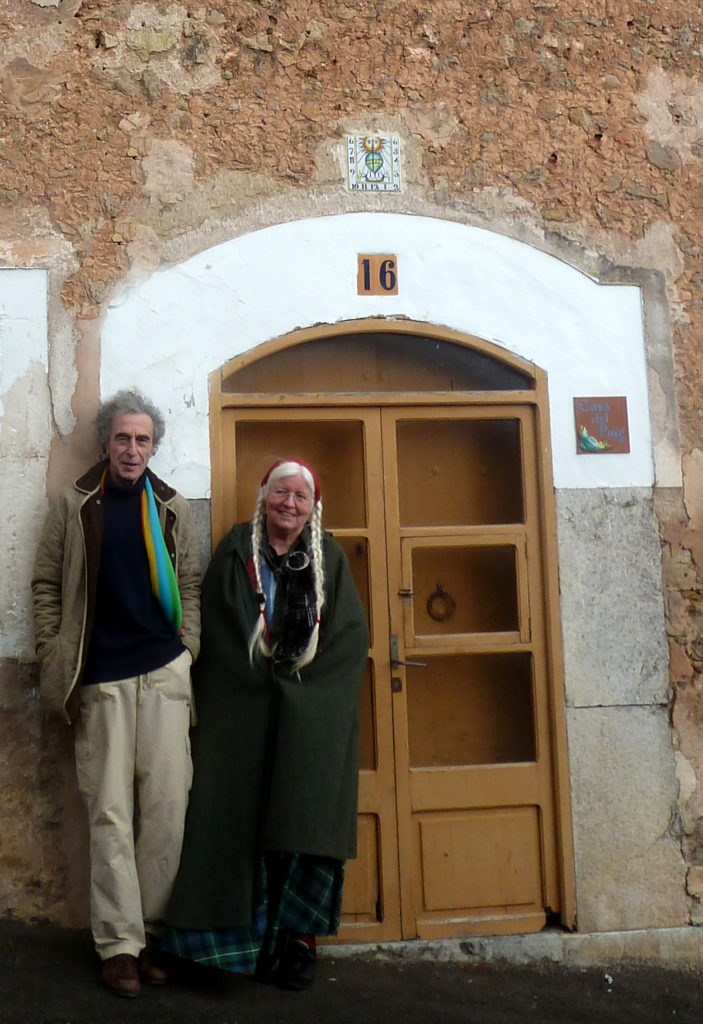 Juan and Leslie outside their 1977 Deia house

For Will, Deia was always a mythic place, “where great artists I’ve loved since forever lived and made music. That’s why to see the houses of Carmeta and Jerry, Leslie and Juan, Daevid Allen and Gilli Smyth and Robert Graves while listening to Carmeta, Leslie and Juan’s amazing stories was an incredible experience for me.”

Parts III and IV of the Book of AM, recorded and mixed by Will Z with Juan, Leslie, Carmeta in Scotland, Mallorca and Belgium was released as a double album by Wah Wah in 2013 and sold out in a matter of hours.

Tune in next week and find out where the visionaries who created The Book of AM are today.