There was once a faded, peeling sticker on the bathroom window of the men’s bathroom at Sa Fonda in Deia that read Sergeant Pepper’s. Sergeant Pepper’s was a basement discotheque in a side street just off Plaza Gomila in Palma’s Terreno district. On 15 July 1968 Jimi Hendrix was the opening act.

Plaza Gomila is a handkerchief-sized square in the middle of the Terreno district. Terreno was the first vaguely boho expat district in Palma. It was where Robert Graves and Laura Riding settled first when they arrived in 1929.Today, Terreno is a ghost town but up until the late 1970s it was jumping.

‘Titos’, the nightclub in the handkerchief sized square was glam back then. It hosted glittering international stars that included Ray Charles and Tom Jones at the height of their powers.

Every night throughout the summer, buses from Magaluf dropped sundazed Scandinavians off at the Plaza where they were descended upon by English boys intent on luring them into the clubs and discos around Terreno. Because of its beaches Magaluf was beginning to dominate cheap and cheerful Mallorca tourism. But there was as yet no nightlife to speak of.

Since 1967, Sergeant Pepper’s had been owned by music business heavyweights Mike Jeffery and Chas Chandler who co-managed Hendrix. The two men had invested big in Sergeant Pepper’s. The sound system was out of this world. A psychedelic light show was augmented by explosions, confetti and dry ice. The décor was groovy, baby.

Why Hendrix, why Mallorca?

Music 68 was a music festival planned for July of that year at the Bullring in Palma. (I’ve never seen a band there but apparently it smells precisely how you’d imagine, which must be disconcerting.) Bands booked for the festival included The Byrds, Incredible String Band, Animals and Jimi Hendrix Experience, then unknown in Mallorca. After the promoters pulled out, the festival was cancelled. But Hendrix was on his way.

Hendrix arrived in Palma on the morning of 14 July. His drummer and bass player, Noel Reading and Mitch Mitchell had arrived a week before. Now that he was on the island, Hendrix – or his manager Mike Jeffery – decided that he might as well inaugurate Sergeant Pepper’s. Jeffery was a fascinating character around whom rumours swirl.

Hendrix goes through the roof

You’ll still meet Mallorquin rock and roll fans of a certain vintage who swear they were there when Jimi Hendrix opened Sergeant Pepper’s. Apparently, Hendrix didn’t get paid.

No-one knows for sure if that’s the reason why, in front of an audience that included footballer George Best, Hendrix put his guitar through the club’s roof while he was playing ‘Purple Haze’. Maybe it was simply that the roof was too low. He could also have been frustrated by the sound which, despite the system, was said to have been awful.

For the next few days, thanks to a cancelled show in Madrid, Hendrix and his bandmates had time on their hand to take a little vacation on Mallorca. At night they knocked around Terreno and hung out in what they called ‘Plastic Gorilla’ square.

Duing the day Jimi toured the island and I’ve always wondered if he made it up to Deia.

Robert Wyatt was the son of Honor Wyatt who had moved with her husband to Deia in 1962 and who was a friend of Graves. Robert Wyatt had been spending time in Deia since at least 1964. When he was in the village, Robert was joined by Daevid Allen and Kevin Ayers who would go on to be his bandmates in psychedelic legends Soft Machine.

Soft Machine supported Hendrix on what was by all accounts a horribly gruelling, badly organised American tour that lasted from October 1967 to July 68. (It must have ended just before the Experience came to Mallorca.) Robert and Jimi became fast friends on the tour. So it’s not hard to imagine Robert telling Jimi he had to visit Deia. 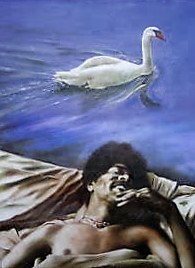 Waterfall, nothing can harm me at all

Sunrise, the Cala, Deia. The beach is empty but for two piles of brightly coloured clothes side by side on a boulder. Two figures swim back towards the shore. As they come closer, we can see that one of them is a skinny black man with an Afro, the other a deeply tanned white woman with white-blonde hair. They tiptoe out over the pebbles. The man shakes drops of water from his hair. Naked, eyes shining, they turn and look back out to sea. The woman rests her head on the black man’s shoulder.

We hear singing. It sounds like a soldier’s marching song. A tall, solidly built man appears on the beach. He wears a straw hat, a short-sleeved shirt, shorts and espadrilles. A faded blue towel is draped over his shoulders. He steps so lightly over the stones it’s as if he’s dancing. The man takes off his straw hat to reveal a shock of white hair above a face as craggy as the headlands. He scans the beach, eyes resting briefly on the naked couple. Still singing, the man takes off his shirt. His torso is white apart from the arms, which are deeply tanned halfway up the bicep.

Slipping off his espadrilles, the man strides past the naked man and woman and into the sea. They watch as the older man swims out to sea so fast he’s in the middle of the bay in minutes. The black man chuckles. Pulling the woman closer to him, he whispers ‘Waterfall, nothing can harm me at all’.

Thanks to David Templeton for permission to reproduce his Purple Haze painting. Contact David at davidtem@gmail.com or memoirsofadementedfan.blogspot.com.

Read Hasta La Flip-Flops! the only book in English that describes what Terreno was really like from the 1950s to the 80s

An account of Hendrix at Sergeant Pepper’s in Spanish

Making ‘May This Be Love’