Miranda Seymour on Robert Graves: Life on the EdgeMarch 4, 2016

If you want to know about Robert Graves, the best place to start is with Miranda Seymour’s Life on the Edge (1995). Ever since I first read the book, I’ve been curious about how it came to be written. I decided to ask Miranda for an interview and she was kind enough to talk to me.

How did Life on the Edge come about, Miranda?

The first two volumes of Richard Perceval Graves’s life of his uncle had been published and the family wasn’t convinced he was going to get the hang of Robert’s relationship with the muses. They wanted a book that looked at Graves’s poetry and his relationship with women and thought a woman would be the best person to write it.

Were or are you a Graves fan?

I knew very little of Graves’s work other than Goodbye to All That and The White Goddess and a few of his best-known poems and had barely read any of his poetry. I had an open mind and no family connections, which is usually the case with the biographies I write. I must say that I was pleased and unnerved to be singled out by the family.

How was your approach different from Richard Perceval Graves’s?

I find a story I want to tell that fits the person and gather all the evidence. I looked specifically at The White Goddess and the muses. Graves needed the muses to always be recreating the state of mental anguish and uncertainty that had been his earliest experience. That mix of emotions had been very fruitful for him creatively so he was wilfully recreating it. 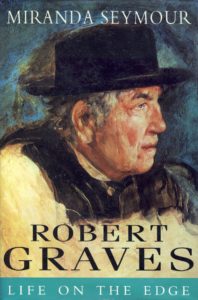 What do you think of The White Goddess?

It’s a very serious book that brings together all Graves’s beliefs – things he learned from his father and in Wales – and synthesises them with his own idea of the White Goddess. I’m not surprised it became an iconic book for people like Ted Hughes and Sylvia Plath.

What was Graves’s love for Laura Riding all about?

He encouraged the side of her that was most powerful and commanding, to feed the state of mental anguish I mentioned before. Actually, while I was in Mallorca working on the book, Irene Gay, the wife of Karl – Robert’s secretary – gave me a ring that used to belong to Laura. Irene, who became a great friend with whom I was in close contact until her death, was always giving me little Graves items. But I was secretly relieved when I was able to present the ring to the Graves collection at St John’s College and put myself at a safe distance from what seemed to be an amulet of misfortune.

After I’d finished Life on The Edge, I wrote a novel called The Telling about the summer Graves, Laura and Beryl spent out in Pennsylvania. It was a summer of madness over which Laura cast her spell.

As you found out more about his life, did your feelings about Graves change and, if so, how?

Yes. I grew to like him less. Because of the number of muses whose lives it seemed to me he hadn’t had a beneficial effect on. I found it particularly distressing to meet Juli Simon. She’d been roped into the role of muse to provide inspiration for Graves and I think she was rather an innocent. Juli had been enthralled, it was her great moment, and what was sad was that her life seemed completely arrested at that point. I think Graves knew how to captivate young women and perhaps he didn’t realise the consequences of that.

Had you visited Deia before you started writing the book?

No, I’d never been there at all. I came to believe it was a strange, magic place when the tourists weren’t there.

What did you love about the place?

I worked at Canellun, Robert’s home, all day and walked back to William Graves’s posada at night. The moon was always bright and the cliffs white and shining. I had the sense of being in an amphitheatre. All I could hear was a dog barking. It was somewhat overpowering. Maybe I was a little enchanted but I did feel I’d stepped completely back into Graves’s world in 1933.

My other fond memory is of William and Elena’s place where the window opened straight out over the bay. It’s funny, my memories are all scenic.

When did you last go back?

I’ve never been back. I’d love to.

Thanks, Miranda. And maybe you will.

Miranda has donated a copy of Life on the Edge to the Joan Graves Biblioteca where it forms part of the permanent collection.