Since the arrival of Robert Graves in Deia in 1929, the village has been associated with an approach to writing in which truth and mythology are happy bedfellows. A writer whose life and work embodies this mischievous marriage of fact and fiction is the legendary and bafflingly neglected writer Leroy Pooh who dominated the Deia literary scene in the early 1980s, back when life in the village was both simpler and more confused. It is not known for certain whether Pooh began his career in Deia. But we can say for sure that his “everything but the facts” journalism found a natural spiritual home in the village. Let us now praise Pooh. 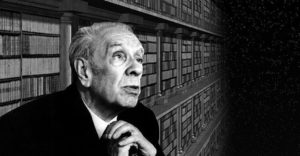 Meeting Jose Luise Borges, who managed the Deia post office for many years, was a turning point for Pooh’s writing. It is believed that Pooh’s ‘periodismo fantástico’ method of journalism was inspired by Borges’s first published texts. The Cuban poet and wrestler Ron Amazona was another influence.

But, it has to be said, Pooh made periodismo fantastico entirely his and it is fitting that he alone was honoured for his contributions to journalism by the illustrious University of the Balearic Islands.

According to musician, writer and chutney farmer Tommy Tombs, Pooh’s long-term confidant, periodismo fantastico began when Pooh’s friend Andrew Valente, gourmet and editor of the Mallorca Daily Bulletin, a byword for quality journalism, commissioned him to write regular articles. The Daily Bulletin was to prove the making of Pooh.

For the Bulletin, Pooh wrote hundreds of articles inspired by Deia. He profiled Deia artist Professor Fat Phil Shepherd, one of whose many wives left him because of the constant “smacking of my lips”. He reported on the controversy surrounding the high-handed tactics of the Deia Siesta Club. Using The Lynton Boys, successfully separated at birth, as an example, Pooh proved that the breast at which a baby is fed will determine whether they are an optimist or pessimist. Among Pooh’s many other exclusives were his Wurlitzer-winning account of blind Deia-artist David Templeton miraculously regaining his sight and the saga of Tommy Tombs’s Tower Tilting. 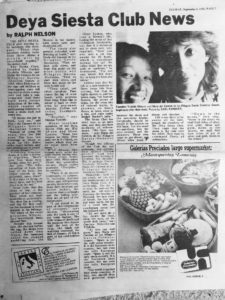 Pooh was no Hemingway, who at the height of his celebrity was paid the equivalent of $1000 a word in today’s money. But he did receive 500 pesetas a page for his articles, about €20. Writing three of these a week enabled him to live comfortably on other people’s sofas and paid for his wine.  Some have argued that Pooh’s rather Bohemian personal circumstances were detrimental to his writing. These critics point to the regular appearance of María del Carmen Mercedes de los Milagros García Gutierrez Gómez in his articles, arguing that this was simply a ploy to fill up the page as quickly as possible. A tactic that elicited angry, indignant letters to the Bulletin.

Supporters of Pooh prefer to suggest that he was pioneering a form of concrete journalism, inspired by his Japanese connections, to radically disrupt the boundaries between poetry and reportage.

Another view of Pooh

The 62-year-old, one quarter black blues singer from Arkansas Jerry Hart, who lived in Deia for many years, was the subject of a 1983 Pooh special called, oddly, “Singing the blues”. Bluesman Hart was initially so incensed with Pooh’s cavalier treatment of the facts that he “threatened to shoot him when I could find the time”.

It was only when Hart realised that it “would require the opening of yet another parallel universe to make sure Pooh could continue to spout his lovely bullshit in at least one cosmos” that the veteran blues singer holstered his Saturday Night Special.

Many years later, after Pooh and Hart had buried the hatchet, the two men stayed up all night drinking in the company of Ron Amazona. Hart waxed lyrical about a beautiful Spanish girl who asked “Me invitas a desyaunar?” saying how lovely it was to receive such a charming invitation. Pooh nodded sagely. “I felt he understood me profoundly,” Hart says now. “He was a romantic soul who appreciated how the entire world could be brought to a standstill by a gesture, a phrase, a chord. Pooh fixed his big blue eyes on mine – one was glass but I could never tell which. ‘Me invitas a desyaunar?’ he said. That was Pooh all over. Never let an opportunity pass you by.’ 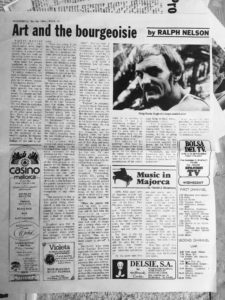 Pooh left Deia in mysterious circumstances many years ago. According to Tommy Tombs who occasionally receives what used to be referred to as a letter from Pooh, he is currently principal of the Okinawa Institute of Periodismo Fantástico. Pooh speaks fondly of Deia and often asks after Mama Kitchen and María del Carmen Mercedes de los Milagros García Gutierrez Gómez.