When you have a connection with Deià you’re likely to discover all sorts of other unexpected links between the village and the not-Deià. This recently happened to me while travelling in Hungary when I found out that Robert Graves had visited the country four times. It turns out Hungary had a special place in Graves’s heart.

Graves first visited Hungary in 1968. He was invited by PEN, the world’s oldest human rights organisation and oldest international literary organisation. Graves “was given a rapturous reception. Photographs from the visit show that there were queues a street long in Budapest for his autograph…He also told [the Hungarians] that [they] had the same understanding of poetry as the Irish and Welsh, a declaration which was intended, and received, as the highest of compliments.” (Miranda Seymour, Robert Graves: A Life on the Edge)

“The Address to the Poets of Hungary” is one of the pieces collected in Graves’s Difficult Questions, Easy Answers.

A disagreement over mythology leads to friendship

On one of his visits to Hungary in either 1968 or ’70, Graves encountered the Hungarian poet, writer, literary translator and classical scholar Devecseri Gabor. Devecseri had translated most of the classics into Hungarian, including the Iliad and the Odysssey. The two men managed to end up in an argument over some aspect of Greek mythology, so fierce that people watching thought they were going to come to blows.

A boat trip from Budapest to the village of Szentendre on the banks of the River Danube had been arranged for the next day. The argument between Graves and Devecseri began again and it looked like one or both was going to end up in the river. Instead, somehow, they became fast friends. When the boat docked in Szentendre, Graves and his new friend went off in search of peach palinka, the terrifyingly strong Carpathian fruit brandy, followed by a relieved bunch of poets and dignitaries.

Szentendre was one of the first places I visited in Hungary. It was the evening of New Year’s Day 2015, bitterly cold and crystal clear. Pieces of ice the size of dinner tables floated down the Danube. The village is utterly unlike any other place I’ve been to in the country since and I was sure it had an oddly Mediterranean atmosphere.

One of the few restaurants that was open was a Greek joint called the Görög Kancscó. We popped our heads round the door, were assailed by aggressively blue décor and backed out fast. I remember finding it bizarre that there was a Greek restaurant in the middle of Hungary.

I wasn’t wrong about the Mediterranean influence. It’s estimated that in the second half of the 18th century around 10,000 Greeks emigrated to Hungary because of the economic conditions in Greece. So many of these found their way to Szentendre that there’s a Greek Street in the village. There has also been a flourishing artists’ community since 1929 – coincidentally, the year Graves first arrived in Deià.

It turns out that the bar where Graves and his new friend found peach palinka was the Görög Kancscó or “Greek urn”. The restaurant I didn’t go in. Graves, Devecseri and the poets proceeded to get plastered on palinka before, several hours later, taking the boat back to Budapest. Going back to Szentendre and raising a glass in honour of Graves and Devecseri at the Görög Kancscó is now number one on my list of things to do in Hungary.

Graves and Devecseri remained great friends. Devecseri visited Deià more than once and Graves helped with the translation of his book Bikasirató into English. Devecseri died in 1971, the year the book was published. Graves remains popular in Hungary, with eleven of his books available in translation.

The 1983 Hungarian invasion of Deià

When Tomás, Robert Graves’s son, was studying typographic design at the London School of Printing he spent ten days with the type and book designer Tibor Szántó in Budapest. Szántó, who ran the Magyar Helikon publishing company, was a friend of Robert’s and had designed several of the Hungarian editions of his books. Ten years later, when Tomás was ready to set up his private press in Deià he printed a letter hand-set in lead type, inviting Szántó to help him print his first book.

Szántó had chosen the poems that were to be published, eleven of Robert’s “songs”, poems written to be set to music. Joan Junyer, the Catalan artist recently returned to Deià after a life in exile did the drawing for the cover. “Within three weeks, with all the paper and ink suppliers in Spain on holiday, we managed to set and print the first pages.”

After deciding that the Deià bookshop Tomás’s wife Carmen owned was a “tyrant”, Szántó told Carmen she should sell it and learn bookbinding. A year later, Tomás and Carmen were in Békéscsaba studying the art, forming part of the Salvador Allende Brigade. 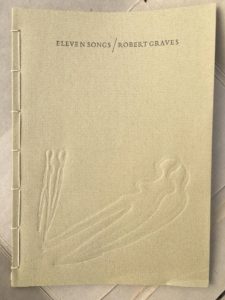 Tomás continues: “In exchange for his help with my press, Szántó insisted I bring some copies of Eleven Songs for the top brass in the government. I gave one copy personally to Kádar Janos, the old hardline Communist leader who told me he had read my father’s poetry while in prison and it had helped keep his spirits up. I was also introduced to the members of the Hungarian PEN Club, who were responsible for giving the Robert Graves Prize for Poetry. The PEN club members suggested that I should print an edition of the prizewinning poems plus one from each of the jurors, in English, while Szántó printed a Hungarian edition. When Tibor died in 2001, at the age of 89, the year I closed down the New Seizin Press, he had still not published the Hungarian version. At least I had never seen a copy.”

After Tomás and Carmen got back from Hungary, Carmen sold her business and bought bookbinding equipment. A few months later they built a bindery onto the side of their house. Winged By Their Own Need, a limited edition collection of the winners of the Robert Graves Prize for Poetry, translated into English, was the third book produced by the New Seizin Press.

If you’d like a copy of the limited edition Winged By Their Own Need, a beautiful book highly sought after by collectors of Gravesiana, please contact Tomás at tomasgraves@mac.com. 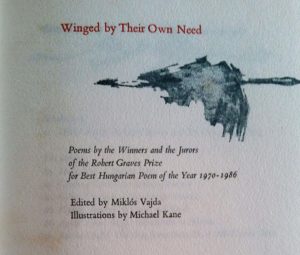