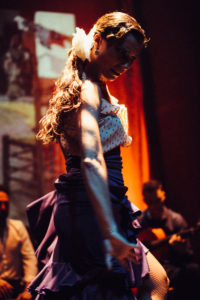 Now that the delicious madness of August in Deià is over, it might be time for a trip to Palma. If you are contemplating coming down the mountain and looking for something truly special to do, Wednesday night at Teatre Sans in the Old Town is Flamenco night in Palma and well worth making the trip for. You’ll also have the opportunity to taste some good Mallorquin wines.

As I’m sure you know, Flamenco is deeply connected to the music and dance styles of Andalusia in the south of Spain. It’s also become associated with Spain’s gypsies or gitanos. Although cheap Flamenco dresses, shoes and castanets – probably made in China – are a staple of Mallorca’s tourist shops, Flamenco is actually very different from the folk music and dancing of the Balearics. To experience authentic Flamenco would usually mean a trip to the Spanish mainland, to somewhere like Seville or even further south.

Which is why we’re so lucky to have Palma Flamenco.

Palma Flamenco brings together highly respected, award-winning performers who have studied with the greats. The core of the colourful but starkly dramatic show is built around dancer ‘La Chispa’ – the absolute embodiment of the spirit of Flamenco – and guitarist ‘El Fresquito’. To watch these two perform is to know you have the privilege of witnessing what Flamenco is all about, ‘that which is born in the vein and dies in the heel’, as the Palma Flamenco website puts it.

Apart from the show itself, it’s wonderful to be able to witness world-class Flamenco in the intimate, atmospheric Teatre Sans. Even if you’re towards the back of the room, you’re still close enough to see La Chispa’s muscles flutter as she performs, to appeciate the astonishing speed with which El Fresquito’s fingers move across his guitar. The only slight drawback is that, as Palma Flamenco becomes more and more popular, you need to arrive at Teatre Sans in good time to buy tickets.

But this is no hardship. The splendid Ca’n Juan de Saigo café, in existence since the beginning of the 18th century and a true Old Town institution, is on the same street at Teatro Sans and open until nine on Wednesday nights. Look out for the lights that surround the Ca’n Juan de Saigo sign, which always remind me of a Hollywood star’s makeup mirror. Allow yourself time to enjoy the best quarto cake and almond ice-cream on the island. While you try to decide whether the antique green glass chandoliers are the most impressive or kitsch thing you’ve ever seen.

Flamenco in the raw in Terreno

If you’re still hungry for more after experiencing Palma Flamenco, and feeling intrepid, head for Terreno. In the early part of the 20th century this was the Bohemian part of Palma. It’s where Robert Graves and Laura riding first stayed when they arrived on the island. From the 1950s to the late 1970s, Terreno was packed with bars, restaurants, nightclubs and discos serving tourists who came flocking in from Magaluf, Palmanova and El Arenal. Before those resorts really got their acts together.

Today, Terreno is a ghost town. But if you walk down Avinguda de Joan Miró – the main drag – heading back in the direction of Palma centre, opposite a row of all you can eat Chinese restaurants you’ll see a tiny, funky bar set back from the road. (I can’t for the life of me remember what it’s called.) If this is open, go in. Because, if you’re lucky, you may hear the owner, who it’s rumoured learned to play guitar from Paco de Lucia, and his friends belting out pure rough Flamenco.

Comparisons are often made between Flamenco and the acoustic blues of the American south and you can believe it here. You’ll hear songs about the way the poor southern Spanish who came over to build and work in the hotels in the 1950s were treated. These are laments sung in whisky and Ducados roughened voices by men with lived in faces, by young guys with tattooed hands, watched over by signed photos of the legends of Flamenco. This is the other face of the spectacle you’ll enjoy at Teatre Sans.

But both are true Flamenco.