The latest edition of Uncut magazine, ‘the spiritual home of good rock music’, includes a feature on the 1960s and 70s Balearic music scene by music writer Peter Watts. Peter contacted The Deià Olive Press because he was keen to interview Tomás Graves and I was delighted to put the two in touch. 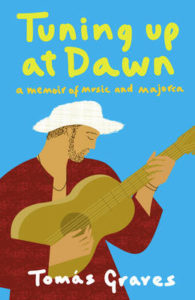 If you don’t already know, Tomás’s memoir Tuning Up at Dawn is a wonderfully lyrical account of his life as a musician and an excellent potted musical history of Deià and Mallorca.

Readers of this blog will know that, from time to time, I like to delve into the musical archeology of Deià so I was curious to hear what transpired. After he’d spoken to Tomás, his one-time brother-in-law, Spanish jazz musician Ramón Farrán and Gong flautist Didier Malherbe among others, Peter was kind enough to submit to being gently grilled by me.

How did the feature come about, Peter?

Uncut had been kicking around the idea of Ibiza as a story and they asked me to write the feature. I tend to write about scenes that help trigger cultural change rather than simply music. I’ve written about the Merseybeat scene at the Cavern, for instance. Anyway, after I’d done a little bit of reading I realised the story of the Balearics music scene was really three different stories.

Ibiza was a hippy community that developed into the club scene we know today. Formentera, where Pink Floyd and Joni Mitchell recorded, was even more hippy, very primitive and hedonistic. Deià was intellectual, artistic and bohemian. Here, bands like Soft Machine and Gong fed directly back into Robert Graves and his influence. When I spoke to him, Tomás agreed with this.

Tomás made it very clear he felt that the Balearics never had a unified music scene. Ibiza and Formentera have African and Phoenician roots. Deià is much more European with an obvious connection to Barcelona. Also, the islands attracted different types of people.

Didier Malherbe, flute-player with Gong, lived in Deià in 1968. For him, “Formentera, was the really wild, moonlike place. Ibiza was in between, there were more clubs and alcohol. Deià was quite crazy but it was more people doing their artistic, bohemian work.”

Why were musicians attracted to the Balearics, apart from the obvious?

It was possible to live very cheaply in places like Formentera or Deià. One person I spoke to said they would work for a month in London, come to Deià and rent a place for three or four months.

What about the political situation in Spain at that time, under Franco?

Interestingly enough it didn’t seem to bother anyone I spoke to that they were visiting or living in a Fascist country. Although every now and then the Garda Civil would bust a beach party, round up a bunch of hippies and deport them. But that never stopped them coming back. But don’t forget, back then, taking drugs was a political act. Drugs were very easy to get hold of – you could take as much pot or acid as you liked. Apparently, after Syd Barrett overdid it with acid he was taken to Formentera to recover. He took even more acid and looked at the rocks.

Do you think the environment of the Balearics had an effect on the music?

Ramón who was once Robert Graves’s son-in-law told me he believes that the landscape around Deià was part of the sound and concept of Soft Machine. The band, of course, was born in the village.

How did that come about?

Tomás told me that “Lady June, who lived here, bought an American businessman to Deià. He heard them play and put up money for them to become Soft Machine. He wrote a cheque for some equipment and that was the last they saw of him for years. He completely flipped out and came back in 68 when he thought he was Jesus Christ and started throwing knives at people.”

What about the presence of Robert Graves?

Graves made certain things happen. Robert Wyatt wrote to me that “My Mallorca was before it became colonised by ‘love-islanders’. I was there during the final days of the pre-war exiles, artistic and literary associates of Robert Graves, thanks to my parents sending me there as a child through their old friendship with Graves. This was before all that hippy explosion accumulated later on.”

When I interviewed Ramón he said “Robert Wyatt was undecided as to what to do with his life.  He found his answers that summer in Deià. He was interested in music and especially drums. He asked me lots of questions about my technique, about music, my way of composing. He was so enthusiastic. We nicknamed him Batty Robert after batería, drums in Spanish, and to distinguish him from Robert Graves.”

Ramón, who came to Mallorca to play a summer residency at the Formentor Hotel, went on to make the album El Olivo with Graves. He said that Robert “appreciated my music and concept of rhythm…He liked good music. He couldn’t stand hearing something that was out of tune or sounded unpleasant – it really irritated him.”

Back to the influence of the Balearics on the music…

Listen to the Pink Floyd soundtrack for the movie More, filmed in Ibiza in 69. It definitely sounds Balearic. You can follow a direct line from there into chill-out and trance. I’m sure the heat of the summer and the laidback way of life would have affected the music.

I’m sure it did, Peter. But I think we better stop there because we could go on forever. It’s such a fascinating subject. Thank you.

Talking to Peter, I couldn’t help but feel envious of the people I know who lived in Deià when, as Ramón Farrán put it, the village was ‘a paradise of freedom’ and everything was being done for the first time. But there is some consolation in knowing that the spirit of Deià continues to influence successive generations to make music and art while celebrating freedom. We can also be a little bit proud that this tiny place had such a profound influence on a certain kind of musical history.