Experience a Mystical Mountain Retreat on our north-west coastSeptember 23, 2016

On her first visit to England, a Spanish friend of mine said ‘England is a woman, Spain is a man’.

I’d never thought of countries as having a gender but the way she explained it made a strange sort of sense. England is soft and curvy. Spain is hard, with clearly defined edges. Like the north-west coast of Mallorca, you could say.

But this only looks like a landscape of soaring peaks and jagged rocks from a distance. When you walk in our mountains – and now’s the time to do so – you discover secluded glades in the pine forests, bathed in fragrant green shade. You find delicate orchids and wild flowers blooming.

Coming down to earth, Mallorca’s growth as a tourist destination had an unexpected effect on the economic fortunes of women on the island. Traditionally, the daughters of landowners were given the land closest to the sea while the most fertile, valuable farmland went to the sons. The arrival of mass tourism from the 1950s onwards put a premium on land nearest to the beach and made many women rich.

So, there is most certainly a powerful feminine side to Mallorca. And this is what inspired my Deià friends Monika Evans and Robin Johnson to offer their Mystical Mountain Retreat between 17-23 October.

The retreat aims to help women to go deeper into who they are through practices that include dream work, journalling, dance, art, and drumming. There will be excursions and plenty of time to simply be in nature. A choice of healing treatments will be available. 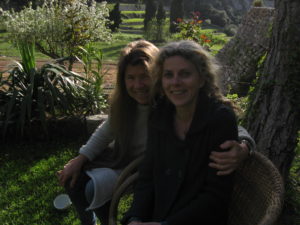 Monika and Robin have always felt there was a story to be told about the different incarnations of the feminine on Mallorca as Goddess, Muse and Virgin. Earlier this year they offered the Four Faces of the Goddess retreat which was a great success, inspiring them to create the Mystical Mountain Retreat.

According to Monika, a rich vein of feminine stories runs along the Tramuntana mountain range from the Puig de Maria in Pollensa through Lluc with its Black Madonna, Robert Graves’s White Goddess in Deià to pre-historic sites and the cult of Santa Catalina Tomàs around Valldemossa. ‘This is the essence we want to capture in the retreat,’ she says.

‘We were amazed when we found out that the location we chose, the spectacular Finca Monnaber, nestled high in the mountains above Fornalutx, belongs to five sisters,’ she adds. ‘It was such a great affirmation of the feminine energies we’re working with. Like people, houses have their own story to tell. When you’re at Finca Monnaber you feel traces of the joyful family holidays spent there over the years. Today, it’s a popular choice for weddings because of its breathtaking views.’

The Mystical Mountain Retreat is the second in what Monika and Robin hope will be many. Each will be designed to offer a beautiful, sacred space to enable healing and transformation based on shamanic and alchemical traditions as well as energy work. As Robin says, ‘Basically we imagined a magical retreat we would want to attend ourselves.’

In case you’re wondering, men are more than welcome. 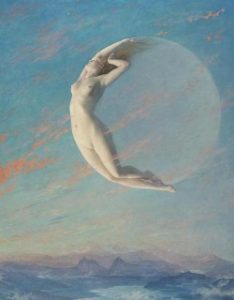 Find out more about this retreat and others