Mariana Alzamora: A journey of hope in artOctober 14, 2016 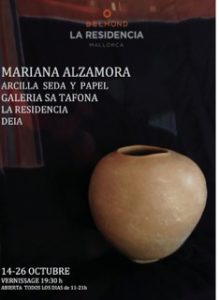 The exhibition by Mariana Alzamora which opens at the wonderful Sa Tafona gallery space in Belmond La Residencia, in Deià, on 14 October is the next step in an artistic life journey that began in Peru.

Mariana’s father, Victor Alzamora Castro, was a Peruvian cardiologist and her mother the sculptor Jeanne Moehlman de Alzamora. After spending the first fifteen years of her life in Peru, Mariana moved with her family to the USA, to her mother’s hometown Ann Arbor, Michigan  This was the 1960s, a time of experimentation and self-discovery. In the spirit of the times, Mariana left the art school at the University of Michigan as she thought it more important for her to find out who she was than to complete formal training in art.

As she says, ‘I didn’t identify with what other people were doing. I needed to find out who I was for art to come from deep within myself.’

Mariana’s journey took her to Lindos in Greece, where she became part of a community of artists. The image of an ‘inverted, emptying woman becoming mountain or tree’ came to her. This intensely charged symbol, which Mariana sees as representing herself, womanhood, and the female in nature, became fundamental to Mariana’s vision and still features in her work today. Mariana also uses symbolism related to ‘the woman curled in a fetal position or floating or standing with eyes closed or open. Half-woman. Woman dismembered, disintegrating and reintegrating, pregnant, mountain, water and wind. Representing the different stages of life and the feelings we go through.’

From Peru, Mariana returned to the States, to the island of Boca Grande in Florida, where she painted onto silk, making clothing that honoured and celebrated the simplicity and abundance of life on the island. Later, when her two sons grew up, she questioned herself and her role once again and, through what she called ‘Retablos’, began making ‘utilitarian work in clay to make and find the woman’. When her journey took her to live in Costa Rica, she used the natural tone of the material itself rather than the vivid colours characteristic of her previous work. In time, the language she learned through the clay she applied to large oil paintings where ‘colour was light and her arms could fly, transcend  gravity, time and space on the canvas’.

Although she had been visiting Mallorca since 1976 to visit her sister Gracia Alzamora who lived in Deià, Mariana finally settled on the island in 2004. She now lives between Deià and Soller.

Mallorca – the return to the integration of culture and the garden

The work Mariana is showing at Sa Tafona is tonally affected by where she lives now, reflecting the many subtle shades of colour in the landscape. Her etchings, she explains, ‘are used not as a means of repeating an image but as monoprints whereby through drawing and layering I further observe the work and life. I also do this with the clay and painting. The figure of the woman in her many forms is still there but she’s no longer primitive looking.’

For Mariana, ‘Ours is a such a generous terrain, irrigated by springs from the mountains’ great reservoirs and water-filled veins. It has been sculpted over the centuries by wind and rain and by man with such sensitivity. The shapes made by the kilometres of olive terraces as they follow the contours of the land are beautiful. As is the way the slopes are elegant steps that lead us from one terrace to another are engineered, allowing us to flow through the levels.’

After a lifetime of wandering, Mariana feels at home here as part of an international community of people who have also been ‘liberated through rootlessness.’ 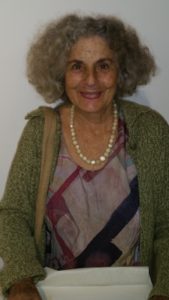 Feeling settled with like minds in a place she loves fuels the sense of hope that inspired the exhibition at Sa Tafona.

‘I believe,’ Mariana says. When Pandora opened what was actually not a box but a Pythos, a jar in the abstracted shape of a woman and released evils into the world, leaving only hope inside, in the womb if you like, It was good and necessary, like Eve taking the notion of duality from the tree of knowledge. Evils were revealed, giving humanity the opportunity to see and study them. We were also given the choice to overcome evil, so important at this time when the global population explosion will either make humanity dwindle back to earth or reach a new level of consciousness and beauty.’

This sense of hope is rooted in nature and in the coming generations who ‘see the earth and politics differently’. Ultimately, then, the theme of Mariana’s exhibition is ‘The Return to the Garden, where a new generation will take care of the earth’.

Representing this new generation at the exhibition will be Mariana’s son Daniel, an inspired musician, who will be performing with the splendidly named Shaman LeBrun and a pair of dancers, another excellent reason to attend Mariana’s vernissage at Sa Tafona tonight at 7.30.

Mariana’s exhibition opens Friday 14 October at Sa Tafona and runs until the 26th.