This is the time of year when writers everywhere look back on what they’ve written over the past year and look forward to the year to come. Here’s my small offering.

As we all know, 2016 has been tumultuous. Our world has changed in ways that are alarming but also inspiring. But every step in what seems to most of us to be the wrong direction is also a potential wake-up call. It’s up to us to be, as activists say, the change we want to see, and that’s enormously exciting.

Deià may be a tiny village but its sheer physical beauty and unique story inspire so many wishes and dreams. In dreams begin responsibilities.

This year, Deià saw more tourists than ever before. Exposure in the world’s media, including starring in the BBC’s award-winning The Night Manager, along with changes in the nature of European tourism mean that the village is no longer a best-kept secret destination. While many of us, especially those who live in Deià all-year round, aren’t especially keen on seeing the village clogged with buses, shiny cars and people glued to their smartphones, we should remember that tourism, managed sensibly, can bring enormous benefits.

For the second year running, the Festival Posidonia Mallorca demonstrated that it’s possible to educate people about the threats to the ecology of Deià and our island that mass tourism, or just mass anything, brings. This is only one example of the work being done by environmental activists on Mallorca.

The Deià Oive Press is dedicated to helping educate people about the astonishing cultural heritage of the village and to honour the remarkable characters who shaped the culture that exists today – not just in the village but internationally. For instance, I had no idea until I spoke to Tomàs Graves that several legendary Latin American writers spent time in Deià from the late 1960s onwards. And I’m constantly discovering fascinating connections between Deià and some of the world’s most intriguing and influential artists, musicians and writers.

In a year when much-loved cultural icons dropped like flies, we said goodbye to Gilly Smythe, a unique artist whose work becomes ever more influential. Gilly lived in Deià for several years and her work was partly inspired by the mythology of this place. I have to admit that I’d never listened to her music before I wrote a celebration of her life in September. I haven’t stopped. Speaking of influence, we should be proud of the peculiar way in which Deià continues to inspire. Who would have thought that The 1975, possibly the band of 2016, could have found their name and a strange dollop of inspiration courtesy of Deià’s own David Templeton?

We should also celebrate Deià’s vibrant art scene. This year saw another splendid year of art at La Belmond Residencia, with Deià artists showing alongside little-seen work by towering masters like Joan Miro. The Deià Olive Press exists to acknowledge and support the work of all the Deià artists who don’t just keep the tradition of art in the village alive but who constantly push the boundaries.

Waking up Deià by dancing

One of my favourite examples of this is the Saturday morning Wake Up Dance events organised by Deià’s own DJ Nin Petit and friends. In the past three years or so, Wake Up Dance has grown from a few people jumping around in Sa Tanca to what you could only describe as a movement. Listening to Nin Petit DJ surrounded by beaming, glowing friends and simpatico strangers has got to be one the best ways to spend Saturday morning anywhere in the world.

Who knows how many curious tourists have wandered in off the street and had their minds blown? 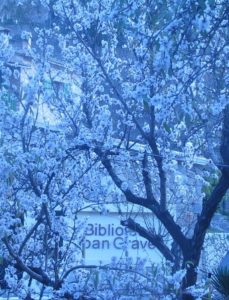 Like so many of us, I’m glad that I knew Juan Graves, who would have celebrated his birthday in December had he not passed away last year. All of us connected to Charles Marlow are grateful for the opportunity we had to help create a section of Deià-related literature in the Joan Graves Biblioteca which opened in the village in February 2016.

From the time I began writing this blog, I remain as thankful for the magic of Deià as ever. I feel privileged to be able to celebrate a place that, along with several of the people who live here, changed my life and helped set me on an endless, winding path of discovery.

I look forward to continuing to celebrate Deià in 2017. Thank you for reading. Happy New Year Deià!

If there’s anything you’d like us to write about, please feel free to get in touch.