Artist and filmmaker Len Lye and writer Robert Graves were both maverick visionaries. Despite their differences, they delighted in each other as kindred spirits. 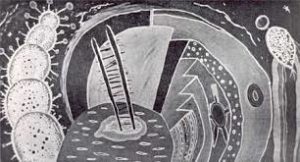 Just inside the front door of La Casa de Robert Graves is, if I remember correctly, an ancient faded batik by the New Zealand-born artist, filmmaker, kinetic sculptor and writer Len Lye. Lye was a great friend of Graves’s and visited him in Deia. The friendship between these two men is a fine testament to Graves’s uncanny ability to connect with some of the most remarkable visionary artists and thinkers of his day.

Who was Len Lye?

Leonard Charles Huia Lye was born in Christchurch, New Zealand in 1901. He was an early champion of kinetic art, which uses motion for its effect. Lye was also one of the first white New Zealanders to appreciate Māori, Australian Aboriginal, Pacific Island and African cultures.

After he was expelled from Samoa by the New Zealand colonial administration for living in a native community, Lye worked his way to London on a steam ship – arriving in 1926. In the late 1920s, he began making films in what he saw as a natural progression from kinetic sculpture.

I first came across Lye’s work when I was studying film in the mid-80s. His A Colour Box, made for the hugely influential GPO Film Unit in 1935 was unlike anything I’d ever seen before. Lye painted gorgeous abstract patterns onto the film and synchronised the animation to Cuban dance music. He only used a camera for the title cards at the beginning of the film.

In 2005 A Colour Box was voted one of the top ten most significant works in the history of animation.

Invited to work on the March of Time short film series in New York in 1944, Lye went on to make promotional films for corporations. His 1957 Rhythm, for the Chrysler motor corporation, used rapid editing to show a car being assembled in accelerated time to a soundtrack of African drum music.

Although Chrysler absolutely hated the film and refused to screen it, film historians regard Rhythm as a masterpiece of montage. The fact that Hitchcock and Scorsese revered Lye should tell you something.

As a kinetic sculptor, Lye was so innovative I find it impossible to place his work in any historical context. His ‘Tangibles’, kinetic sculptures such as the 45-metre Wind Wand at the Govett-Brewster Art Gallery and The Water Whirler on Wellington seafront, exist somewhere outside of time for me.

(Incidentally, Graves was one of the people who helped Lye set up a Wind Wand in 1960 on a vacant lot in the West Village.)

Lye himself seems to exist in a different dimension. He looked like some kind of comic book magician or wizard. Apparently he had a personality to match, wore astonishing clothes and was as unconventional as you’d hope.

Len Lye met Graves and Laura Riding not long after he arrived in London. As his biographer Roger Horrocks writes, ‘Riding and Graves…admired the New Zealander for his freedom of spirit’. The poet Alistair Reid, a great friend of Graves’s until he ran away with muse Margot Callas, remarked that ‘Robert treasured Len as someone who seemed as though he had come from a different planet.’

Lye was also a jazz buff and his biographer claims he was the first to inspire Graves’s love of the music.

Graves went on to donate money to help Lye make Tusalava in 1929, his first animated film. In 1930, The Seizin Press, set up by Riding and Graves, published his No Trouble, a book of Lye’s idiosyncratically written letters to them, his mother and other people. Lye was as strange and experimental a writer as he was an artist.

Along with his first wife Jane Thompson, Lye was one of the first people to visit Graves and Riding after they moved to Deia in 1929. While the landscape around the village reminded Graves of his beloved Monmouth, Lye thought it looked like parts of New Zealand.

But he also wrote that ‘There are many things here unequalled – plants, rock formations, shapes of twigs, pebbles on beach. Sun is good, so is clear daylight and nightlight…Mountains their own textures, a good stream below and trees with their own balance about them.’

While in Mallorca, Lye would design covers for The Seizin Press, including for Graves’s To Whom Else? And Riding’s Twenty Poems, for which he created a collage of local materials. Like many a visitor to Deia after him, Lye became obsessed with collecting stones from the cala. He used these in outdoor constructions which included ‘some totem-like figures’ that recalled Australian Aborigine sacred sites and anticipated 1960s ‘earth art’.

We can only wonder what the Mallorquins made of these.

On that first visit, Lye stayed for four months, first at Casa Salerosa and then at Ca’n Pa Bo, which receives rather more sunshine.

In the late 1960s, Lye and his second wife Ann visited Graves and Beryl in Mallorca and stayed at Canellun. Ann described the visit as a ‘heavenly setup – oranges ripe – our own little house. Climbing mountains like goats – Majorcan soup and thin bread – sweet rolls for breakfast – more climbing around – best squid ever.’

I don’t know of a more evocative, charming description of Deia life at its best.

Working in the fifth dimension

There would always be enormous differences between Lye and Graves. As Ann put it ‘Len never knew what Robert was, and Robert never knew what Len was at all’. But they remained great friends who regarded each other as ‘old myth men’.

Perhaps the best description of the deep connection between the two comes from Graves. In a letter to Lye he wrote ‘Yes, chum, you and I do things in a weird [way] certainly inherited from Ireland or Scotland or some place which enables us to work in the fifth dimension and so by-pass time, and be considered geniuses for anticipating strange facts and phenomena.’

Lye wrote ‘We take our happy moments to the grave but art lives’. For many of us Deia is a place where it feels like the veil between dimensions, between past and present is especially thin but art lives. There have been times when I wouldn’t have been surprised to see Len Lye down at the cala building peculiar structures. I haven’t seen him yet but I haven’t given up hope.

All the quotes in this post come from the excellent Len Lye by Roger Horrocks. Reading the book I discovered that the batik by Lye on the wall at La Casa de Robert Graves was originally a shawl made as a gift for Laura Riding.