This Friday 12th May you can help to support the brilliant Asociación Ondine at an important and special fundraiser event ‘Asociación Ondine’s Sea Soirée’, in Port Adriano, Mallorca.

Many local businesses in Deia have shown their support by donating prizes to a raffle which Deia resident Joanna de Deia has been organising.  Joanna is deeply passionate about cleaning up the ocean and helping Asociación Ondine to continue its successful work in the Balearics. I caught up with her to learn, first hand, about Asociación Ondine and Friday’s event – which is not to be missed! 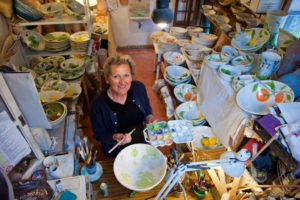 Tell me about Asociación Ondine and how it was set up?

First of all Asociaciòn Ondine stands for a clean and healthy Balearic Sea.  It is a Mallorcan born, non-profit association from an Australian father named Brad Robertson and a Spanish mamacita called Bea (since 2010). He and his Spanish wife met in Australia and were looking to move to the Med, closer to Bea’s home. They looked around at different coastal places to set up a diving school and found that the best spot with the richest underwater world was Mallorca. After diving around the Balearic waters they discovered that the Marine Reserves were not being protected as they should be. There was little enforcement of the conservation regulations.

I met Brad when the Asociaciòn was in its early stages and he and Bea had just given birth to their first child around five years ago. I really admire them for keeping the torch burning for the Asociación while raising children.

When did you become involved in the project?

I got involved with the budding Asociación Ondine after having been to San Francisco and meeting with the folks working at the Mission Blue office there. I was inspired by their quest to create ¨Hope Spots¨ around the globe. Silvia Earle is a world-renowned oceanographer and I have been a fan for the past 20 plus years after reading her book Sea Change. (In 2009 Silvia Earle did a highly acclaimed Ted Talks called Protect our Oceans.)

Upon returning to Mallorca I met with Daniel Wahl who introduced me to Brad Robertson and I have been striving to support Brad and Beas´ bold efforts ever since. He is at the helm and is so passionate, persistent and charismatic that he has ignited others to collaborate and cooperate to achieve the end goal of conserving the Balearic Sea, giving Mother Nature a helping hand. He has managed to get the cooperation of the government, ministries of fisheries and more as well as the yachting community, folks at the Aquarium, the budding marine biologists at the University Balear and kids through the ‘Dos Manos’ School Project and more.

Brad is a dynamo and was invited to join the Mission Blue team. He was able to show Silvia Earle at Mission Blue that there is still hope for the Balearic Sea if we take action to conserve it, protect it and nurture it. We are now a ‘Mission Blue Hot Spot’ since November 2015… FIRST IN THE MEDITERRANEAN!  Not long really but the impact has been amazing.

What do you do specifically for the project?

I work with the Asociación as an Eco-Artist. My quest is to use my ceramic artwork in support of Asociación Ondine and the work they are doing around Mallorca’s beaches. Moreover,  I hope to persuade their team to come to Cala Deia and make an assessment of the health of the under water life of the Cala and make suggestions about how we can maintain it well. I will organise that the Asociacións `Dos Manos’ program is also brought to Deia school to teach the children the value of conservation of the sea life as well as the perils of plastic pollution in the sea. 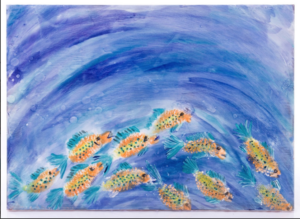 When did you come to live on the island?

I came to Mallorca on a sailboat from the Caribbean Sea 37 years ago. It was a different world then. The sea needs our help now in order to cope with the onslaught of humanity that has hit this island these last years. Many know my passion to clean up Cala Deia and may have seen the small ceramic murals I made which are there to remind people to put their trash in the bin and not leave it on the beach.

What are your hopes for Mallorca and the community that you live in?

I hope that the people who love to live here and love to come here on holiday would take some time to support this effort. The event on Friday is going to be wonderful so get your tickets now!

Asociación Ondine Sea Soirée takes place this Friday 12th of May @ Coast by East Port Adriano from 7pm – 2am. There will be drinks, live music, sit-down dinner, DJ, dancing, a fantastic raffle and more.

Tickets for the event cost €100 per person and raffle tickets cost €2 per person. ALL FUNDS RAISED FOR THE EVENT GO TOWARDS THE PROTECTION OF THE BALEARIC SEA. 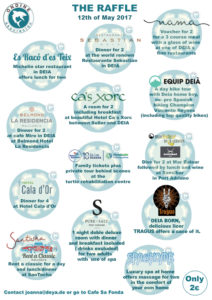 For enquiries and to buy event and raffle tickets use this link or contact JOANNA DE DEIA directly joanna@deya.de +34656274897. You can also purchase raffle tickets from Joanna’s Deia studio or bar Sa Fonda. To learn more about Asociación Ondine please visit their website.