Mallorca’s favourite food, a rock and roll band and a powerful symbol of enduring island culture. What is it about pa amb oli?

I have no doubt that you can tell an enormous amount about a place from studying and, of course, eating its food. When it comes to Mallorca, we’re extremely fortunate to be able to refer to Tomás Graves’s excellent book Bread & Oil: Majorcan Culture’s Last Stand. Actually, the book is about rather more than just bread and oil. Pa amb oli is also made with garlic, tomato and whatever you like to put on top.

You say Mallorca, I say…

Incidentally, there’s an interesting debate around whether the island’s name should be spelt ‘Majorca’ or ‘Mallorca’ with valid arguments on both sides. Sadly, we don’t have space to go into that now. Let’s get back to pa amb oli.

Why did you write the book, Tomás?

Since the Pa Amb Oli Band never got around to making a record, I suggested we could put together a scrap-book of images, anecdotes, recipes etc. When this became obviously a non-starter, I said I’d write a recipe book with the band’s input. However, just when I’d begun writing, I saw a Catalan book called Theory and Practice of the Pa amb tomàquet (the Catalan version of pa amb oli). My publisher told me not to abandon the project, that there was room for both books on the market.

I find it’s easier to write with a specific reader in mind, and in this case it was my daughter’s boyfriend and his circle of friends: young, broadminded Majorcans with an interest in their cultural heritage but who don’t look towards Barcelona for their inspiration.

Why was it written in Catalan first?

I began writing in Castilian because I wanted to reach the non-Catalan speaking public who I thought might be more in need of the information. But I discovered in my interviews that pa amb oli was so deeply linked to the Majorcan dialect of Catalan that half the book would have to be in italics, so I opted to let the interviewees speak in their own language.

Why did you decide to do an English version?

I didn’t decide. My sister showed the book to her agent, a foodie, and he offered it to Grub Street Publishers, who turned it down. But Prospect Books in Devon were interested and so, despite my feelings that nobody else in Britain would be, I put myself to the task. Of course, I again came up against the problem of italics, but thought that British readers are more forgiving of foreign words than Spanish readers are.

What was the reception to the book when it was published in Catalan and then in English?

In Majorca, the reception was warm but by no means overwhelming. I did get asked to talk about the subject at many town halls and associations around the island though, which always ended with a communal pa amb oli. Funnily enough, despite championing the Balearic pa amb oli over the Catalan pa amb tomàquet, the only official recognition was from a municipality in Catalunya which hold an annual pa amb tomàquet Festival, which awarded me the prize for Book of the Year.

In the UK, the book sold far more copies and got excellent reviews from Elizabeth Luard, Michael Bateman and others. When the Prospect Books print run ran out, the book was taken by Grub Street, repackaged (the illustrations were eliminated to keep costs down) and became one of the steadiest sellers in their catalogue, running into a second edition with a new cover. The University of Wisconsin Press also published it in the US, and a Dutch translation was published in Holland.

The ‘bread and oil specialist’ label has led me to feature on Rick Stein’s programme and I’ve been contacted by the Hairy Bikers for a forthcoming programme to be shot on the island.

How did you amass the knowledge you display in the book? It’s remarkably detailed.

Just by talking to the right people, and by having eaten bread and oil since I was a toddler.

How have things changed on the island when it comes to Mallorquin food and culture since the book was first published in Mallorquin in 1998 and English in 2000? Are you optimistic for the island’s future?

Since I wrote the book, there has been an explosion at the top end of the olive oil market and boutique bakeries have become rampant. Yes, seeing the way local food culture – organic veg plots, wood fired ovens – is now being introduced to schools, in the long term I’m optimistic.

How would you describe the state of the Mallorquin cultural identity right now?

I think it has become more dynamic, incorporating outside influences to its own advantage, becoming more forward-looking than the nostalgic vision which dominated while I was writing the book.

What are the challenges the island faces that tourists and foreigners might be unaware of?

Probably infrastructure – sewage treatment, garbage recycling, public transport, dependence on external food supplies, excess nitrates in the groundwater, and of course the seasonal pressure caused by the saturation by tourists. The problems generated by cyclists, cruise ships and hire cars are nearing breaking point; the holiday rental boom is also causing a lot of friction among neighbours of short-let apartments.

Do you have any plans to write another book?

Yes, I have two or three half-baked projects which I’ll fire up when I get around to it.

Where would you go to find the ‘real Mallorca’, if that question can be answered?

At any village bar at seven on a winter’s morning.

Thanks, Tomás. That’s a perfect answer.

After rereading Bread & Oil recently, I was surprised to realise how much first reading it back in 2000 had shaped my understanding of Mallorca. The book taught me to appreciate the way the island’s rich history fed into a deceptively simple cuisine. I also learned that the eating well here isn’t about tasting an array of different dishes. It’s about finding the places that make the food you love the most better than anywhere else. 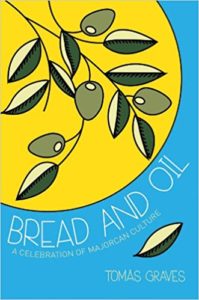 Voyaging the length and breadth of the island in search of the perfect frito mallorquin de sepia, tumbet or pica-pica – let alone pa amb oli – has led me to places I would never have visited otherwise. For example, I will always be grateful for Tomás for turning me on to S’Hostal in Montuiri, home of the best pa amb oli I’ve ever tasted. But then I don’t have a Mallorquin mother.

You can pick up a copy of Bread & Oil on Amazon. I thoroughly recommend you do. Arm yourself with it and explore.