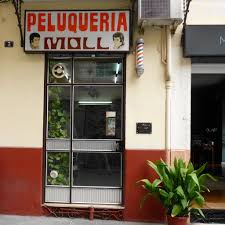 Munching on a Mallorquin croissant and sipping café con leche outside a café in Placa del Banc de L’Oli in Palma one recent Saturday morning, I decided yet again that morning is my favourite time on the island.

Mallorquin croissants are an acquired taste. They are, I believe, made with lard not butter. This, I’ve been told, has something to do with the stark choice faced by the island’s Jews in the 15th century – between death as a heretic and life as a Converso.

The Jews who did convert became known as Xuetes, which means pork fat and was used as an insult. According to what I’ve been told, some Jews fooled the powers that were into thinking they’d converted by cooking everything with pork fat. Including baked goods.

It was just before nine and I was waiting for Peluqueria Moll on nearby Carrer d’estade to open. A lone bottle-blonde lady was strolling around the square, checking the time on the parking meter for some reason.

If you don’t already know, Peluqueria Moll is one of very few traditional gents barberias left in Palma and, for all I know, the whole island.

A world of barbershops

For those of us who happen to be men of a certain age, finding a barber who will give you a traditional haircut – a cortado tradicional, in my Spanish – using proper scissors and not clippers in a defiantly non-unisex sanctuary gets harder and harder.

Also, apart from maintaining one’s impeccable grooming standards, I’ve always found that hanging out in a gents barbers is a great way to get a feel for the male side of life in any country in the world.

The only place I didn’t have such a good experience was in a barbers in Little Italy, New York, in the late 1980s. I found what I thought was the perfect place. The barber looked like John Travolta in Saturday Night Fever. There was a signed photo of Frank Sinatra on the wall. Over the course of 15 excruciating minutes, the barber responded to my attempts to start conversation with a series of grunts. He then proceeded to wave a cutthroat razor a bit too close to my jugular for comfort.

But you’re in safe hands at Peluqueria Moll. Juan is a third generation barber. He doesn’t speak much English but he doesn’t need to. Expect to pay E15. I tip Juan but I notice that other customers don’t appear to.

Even if it’s the height of summer, mornings in Mallorca really are magical. No matter how hot the previous night has been, the air is cool and fresh. The people who are around are relaxed and enjoying the respite before another long, hot day begins.

For me,  early morning is by far the best time to swim at Cala Deia. There are few pleasures to compare with walking down the path that begins when the Clot ends, diving into the crystal-clear water, swimming out into the middle of the bay and gazing back at Deia church and the bowl of the mountain in which the village sits.

If you take the path back to the village it’s a bit of a climb but it’s a great way to work up an appetite for breakfast at Sa Font Fresca, which opens at 6.30 am. Apart from the superb view down the valley to the sea from the terrace, Sa Font Fresca is the only bar in the village where I’ve ever seen workmen. When it comes to cafés, this is always a good sign. 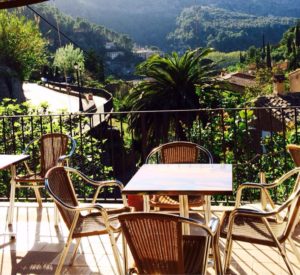 Sadly, fewer and fewer workmen appear to take a cognac with their breakfast. Although it can be the start of a slippery slope, there’s something fantastically satisfying about brandy for breakfast, especially if it’s the inappropriately named Soberano.

A friend of mine remembers seeing pilots at the old airport in Palma taking a brandy before work. Those were the days.