I’ve always been fascinated by the Marxa des Güell, the overnight walk from central Palma to Lluc monastery that takes place every year around this time. I’ve even contemplated attempting it.

Last Friday, while strolling down Carrer del Sindicat in Palma, I bumped into the writer Anna Nicholas who told me she was doing the walk the next evening. Fortunately, Anna didn’t ask me to join her. She did, however, answer my questions after she’d completed the walk. 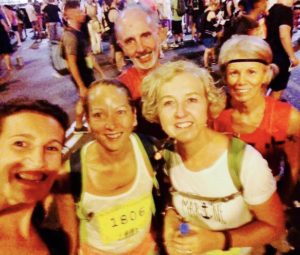 Could you tell me about the Marxa des Güell, Anna? What actually is it?

The Marxa des Güell is an annual walk whose origins go back to 1974. There used to be a popular bar named Güell in the Plaza of the same name in central Palma. One day the owner’s six-year-old daughter was in the bar holding a syphon which exploded. She escaped any injury so the family decided to make a pilgrimage of thanks to the statue of the virgin at Lluc monastery. A group of 30 friends joined Tolo Güell, the child’s father, for the first walk on 18, July 1974.

By 1980, with sponsorship from Sa Nostra bank, the walk had grown considerably with a purported 40,000 participants. The date also changed to the first Saturday in August which this year fell on 5, August. Participants pre-register online and get a bib number and little booklet that needs to be stamped at four stops along the way. On arrival at Plaza Güell they receive their first official stamp and set off once the fireworks have been launched at 11pm. There’s a festive spirit with live performers and plenty of laughter and music.

Why did you decide to go on it?

I have always known about the walk and wanted to participate one day but just to do it without a cause seemed to lack purpose. By chance, a few weeks ago, I met Ron Hawes, founder of local children’s charity JoyRon, and he told me he was looking for walkers. He himself usually participated but had been ill and his doctors had advised him against it. It seemed like a perfect opportunity to help a worthy cause and attempt the walk.

Did you do much preparation?

To be honest, having decided to take part so late in the day, I had little time to prepare! I persuaded two sporty girlfriends to join me so we all shared duties on buying energy bars, gels and snacks – oh and blister pads – for the journey. I run three times each week, swim and do pilates so I was sure I could complete the walk, even if hard work.

Were there many people walking?

I was told that there were 5000 participants this year. It was hard to tell as we were right at the front of the start line and couldn’t see how dense the crowds were behind us. The majority of participants were young Mallorcans who I believe view it as a rite of passage.

How would you describe the Marxa des Güell?

To be honest, it’s a very tough walk and I say that as someone who’s run eight marathons! Aside from the heat – it was 32c at the outset – it’s an overnight adventure so tiredness and darkness are slightly disorientating factors. On a normal walk or run you can at least be distracted by scenery but you’re a long time in the dark until dawn breaks and you’re walking on asphalt the whole way which is a killer on the feet.

Having said that, it’s very convivial and we formed a small group and shared snacks and laughter along the way. There were a fair few water and fruit stops after the first 2.5 hours of walking and that kept our spirits up. In fact in Selva, at about 6am, they even doled out real coffee which was sheer bliss! It was quite a party atmosphere and everyone relaxed on the side of the road or grass to stretch and recuperate before the really steep final 18km ascent to Lluc monastery.

Were there any especially memorable highlights?

I enjoyed chatting about chefs with a young Spanish cook who had eavesdropped our conversation about food. We had a lively chat about cooking – sort of ironic given how frugal our nighttime diet was. We loved reaching Selva and being given fruit, water and coffee which we spiced up with a touch of brandy and sugar!

The moment we reached Lluc and walked down to the monastery was fantastic. We all felt elated and loved getting our official certificate. It was very buzzy with lots of happy, relieved and sleepy people about.

How long did the walk take?

Apparently people take between 8 and 13 hours to complete it. We did it in exactly 10 hours so we were pleased. 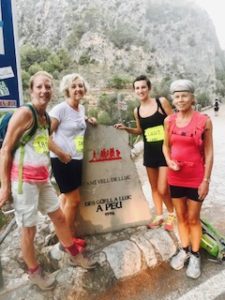 What would you tell anyone thinking about doing the Marxa des Güell?

Really make sure you do some long walks and even runs over a period of time – on asphalt – to prepare. Also it’s much better to go with a group as you can chat and buoy one another up along the way. We spent a lot of time discussing our various aches and pains and putting the world to rights!

We noticed that many people gave up the ghost en route starting at around the three-hour mark. There were ambulances and vehicles picking up exhausted stragglers from Santa Maria onwards and I can only assume that they hadn’t realised how hard the going might be.

Could you tell me about the charity you supported by walking – how can people donate?

The charity is JoyRon and the project we are supporting is the building of a cinema for terminally ill children and their families to enjoy at Son Espases state hospital in Palma. The charity hopes it might be complete for Christmas if they can raise sufficient funds.

How’s the writing going? Are you working on anything at the moment?

I am always writing! Currently I’m working on a novel set in rural Mallorca but I have numerous other projects up my sleeve as well as a fair bit of journalism for the Telegraph and FT.

How do you feel about August in Mallorca?

I scuttle away and hide in my writing playpen until we can all breathe again in late September!

You can donate to JoyRon via the donation page at www.joyronfoundation.org/donate/ which allows you to donate via a bank transfer or credit card.

Find out more about Anna and her books here.