It’s been said that we’re living in an age of memoir. As the memoir writing genre has boomed in popularity, more and more of us have decided we have a life story to tell. But, as we’ve found out, writing that story is another thing altogether. 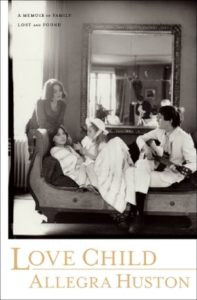 Allegra Huston knows all about the challenges of writing a memoir. She overcame them with impressive results. Love Child, her 2009 memoir, has been deservedly acclaimed. Allegra will be leading a Memoir Writing Workshop at Belmond La Residencia between 22 and 27 October and sharing some of her valuable insights with a small group in a glorious setting.

When I interviewed Allegra recently we talked about how the process of writing Love Child had shaped her approach to teaching memoir writing.

But first let’s consider what a memoir is and why the genre has become so popular.

What is the difference between memoir and autobiography?

According to Writer’s Digest, it’s all about the timeline covered in the writing: ‘autobiography focuses on the chronology of the writer’s entire life while a memoir covers one specific aspect of the writer’s life’. A memoir is also much more concerned with a writer’s own memories, feelings and emotions.

In his own fantastic memoir, Palimpsest, Gore Vidal wrote ‘a memoir is how one remembers one’s own life, while an autobiography is history, requiring research, dates, facts double-checked.’

Good enough for me.

Some people have always felt compelled to write their life story when they get to a certain age. But, in recent years, the memoir writing genre has exploded in popularity.

In Memoir: A History (2009), Ben Yagoda writes ‘According to Nielsen BookScan, which tracks about 70% of US book sales, total sales in the categories of Personal Memoirs, Childhood Memoirs, and Parental Memoirs increased more than 400% between 2004 and 2008. Also, memoirs in Britain occupied seven out of 10 bestselling nonfiction hardcovers in both 2007 and 2008’.

My guess is that this growth in memoir writing is connected to the rise of celebrity culture, the mushrooming of media that feeds human interest stories, and a feeling on the part of some people that, in an accelerating world, they don’t want to be forgotten. There’s also a kind of ‘me too’ sense – my story is just as good as his/hers.

Many people are perfectly happy simply writing their life story for the sake of it. My eighty-year-old father trawls through his life every day with no thought of being published. He writes to enjoy his memories, make sense of his past and, I suspect, stay mentally agile.

But, I’m sure my father would like his memoirs to be read. And, if it’s me that’s going to read them, I would like them to be entertaining.

It seems logical to assume that when you’re writing a memoir it must be true to life. But the truth isn’t necessarily gripping. In any case, you don’t need to be an avant-garde metatextual theorist to know that absolute truth goes out the window when you start writing.

What you do need, however, is a compelling story. Otherwise you’ll never connect with a reader. Apart from that, creating a structured story has other benefits for your writing.  Allegra explains why.

‘When we start writing a memoir, there’s a temptation to trot out the same stories,’ she says. ‘But because we’ve told them to ourselves and other people over and over again, they develop a rehearsed quality that can take the edge off their freshness. This is what happened to me when I first started writing Love Child. And when I read what I’d written it was so flat and lifeless on the page I was convinced I couldn’t write. I had to find a way to not tell those oh-so-rehearsed stories.’

What did you do? ‘I created a structure which allowed me to come back to the scenes and characters in my life from a different direction. I realised that the real story of Love Child was that of the fragments of a couple of families coming into mine. I had that basic outline and then I started trying to find cause and effect, which is how story works. I looked for the connections between the people in my life – who I loved, who I hated – and followed those. 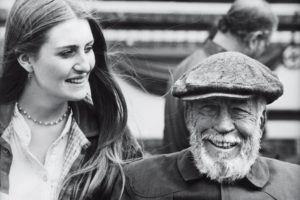 And did you stick rigidly to this structure? ‘No. I believe you have to surprise yourself with your own writing. If you don’t know how the story is going to end, that’s probably a good thing. I started in the middle of my story. As it turned out, I actually started at the obvious point. I would really suggest anyone writing a memoir starts in the one place that isn’t the beginning. It’s the same with the writing itself. I find that the clever, tidy phrases I write are the ones where people say, “that’s not you”. Good writing happens when you’re not putting words together for a conscious effect and that’s precisely when your words do have an effect.’

What about truth? ‘When I started writing Love Child I was no different from anyone else. I thought the whole point was to interview people and get the facts right. Then I discovered my stepmother and stepsister didn’t remember things any better than me. I almost gave up. That’s when I understood I was writing a story and it had to be super-tight.’

It sounds like you went through a lot to write Love Child. ‘Absolutely. One of the reasons I’m qualified to teach memoir is because I had to learn it all for myself. It surprised me how far back into the chaos and formlessness I had to go to find the truthful words.’

No doubt there will plenty more truthful words from Allegra at the workshop.

The total number of students is strictly limited to 10 but there are still a couple of places left. It’s bound to be a thoroughly worthwhile experience for anyone seriously considering writing a memoir or, indeed, writing of any kind. As Louise Davis of Belmond La Residencia says, ‘Workshops are usually in more mundane locations and our hotel’s setting in the village of Deia, with its powerful literary associations, will bring much added pleasure to the participants, making this a truly unforgettable occasion.’ 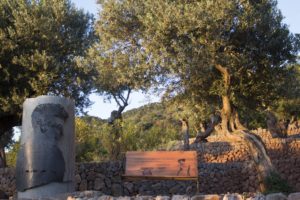 Email workshop organiser Rosalinda Much at rosalindamuch@gmail.com or call +34 634 360 073 for more information.

Achievements by alumni of Allegra’s workshops, Jonathan Asser and Will Collins.

Listen to Allegra talk about the workshop here.

Read the first part of my interview with Allegra here.