Yoga and meditation at the Miró Foundation: the art of silenceOctober 4, 2017 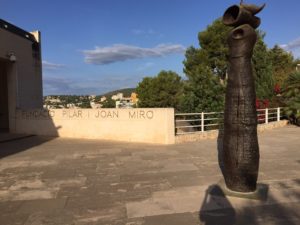 On Saturday morning, I’ll be joining the movement and meditation class at the Fundació Pilar i Joan Miró a Mallorca in Palma. It’s the perfect reason to visit the foundation, especially if you never have before, but also to experience a yoga and meditation class given by one of the teachers from Earth Yoga. I’m intrigued by the combination.

As you may already know, Miró’s wife and mother were both from Mallorca. He settled on the island in 1956 and lived here until his death in 1983.

Outside Mallorca, Miró is regarded very much as an avant-garde artist. In Britain, he was greatly admired by members of the St. Ives group of artists such as Roger Hilton and in America he influenced Color Field painters like Jackson Pollock. But, once you’ve lived in Mallorca for some time, where his characteristic biomorphic forms and colour palette are appropriated by everyone from banks to tourist tat peddlers, it’s easy to forget just how powerful Miró’s work can be.

The Miró Foundation houses a fine collection of his work in a large, modern space. You can also wander through his studio, which has been either lovingly preserved or restored. It’s here, especially, that you see the influence of Mallorcan folk culture on his work. 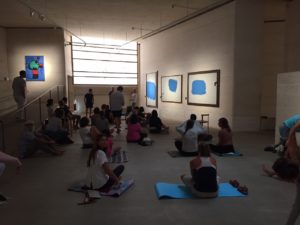 I’m not quite sure when Earth Yoga actually started but I’ve been going to classes at the studio for at least five years. Since it began, Earth has pioneered an international approach to yoga on the island. Today, the studio offers classes in all the major forms of yoga practice – from Vinyasa to Yin – and hosts workshops by internationally renowned yoga teachers.

Although Earth is a serious yoga studio, it’s also a truly friendly place. So if you fancy checking out the studio but you’re new to yoga and worried that you be might be intimidated, don’t be. You’ll be made most welcome.

One of the things I’ve always liked about Earth is it’s constant willingness to explore what yoga is and can be, as a force for change in the world as much as anything else. Saturday’s movement and meditation class at the Miró is part of this willingness to gently push the boundaries at all times. 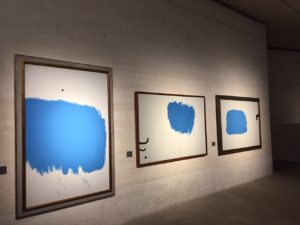 Inspired by MOMA, the Museum of Modern Art in New York, Saturday’s session will be a slow movement and meditation class surrounded by Miro’s paintings. The practice is for people at all levels of yoga. It will be donation-based, with proceeds going to the Fundacio Nazaret, an admirable organisation caring for orphans and children with needs in Mallorca.

After the class is over, you’re invited to explore the Miró Foundation for free.

For me, Saturday’s class at the Miró adds up to a great opportunity to do some yoga, be mindful and see Miró’s work in a new light – all in a great cause. What more could you ask for?

The class starts at 9 am and finishes at 9.45 on Saturday 7 October. It’s at the Fundació Pilar i Joan Miró a Mallorca on Carrer Joan de Saridakis, 29, 07015 Palma. The Foundation is in San Augustin, not the centre of Palma, but it’s easy to get to by car or the number 46 bus. If you have any questions, call the Foundation on 971 70 14 20. And if you can’t make it, there’s always next month’s class on the first Saturday in November.