Towards the end of last summer, an American lady called into the offices of Charles Marlow in Deia. She was carrying with her the first issue of a magazine called Mediterranean Review published in 1970. Her name was Nancy Banks. 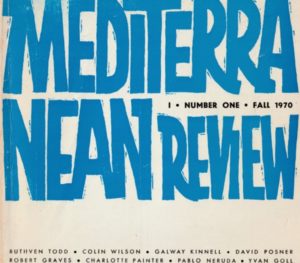 Nancy had been a student at the Mediterranean Institute of Dowling College in Deia in 1969. She had read this blog and, as she put it, “discovered some connections to that strange, wonderful period of my life”. Nancy kindly asked me if I would like her copy of the Mediterranean Review. I certainly did. I knew of it but had never seen a copy.

How the Mediterranean Review was born

In his book Deya – memoirs of an artist colony, Robert DeMaria, founder of the Mediterranean Institute writes “As a young editor and writer I often dreamed of starting a magazine of my own. I had an opportunity to do this when the budget for the Institute included some money for a literary magazine. I appointed myself publisher and set about locating worthwhile material, much of it from our writers-in-residence.”

The first edition of the Mediterranean Review appeared in autumn 1970. It included contributions from Robert Graves, James McKinley, Colin Wilson, Ruthven Todd and, in translation, Pablo Neruda. Sadly, the Mediterranean Review proved too expensive, and, even though it had around 1000 subscribers, it folded after half a dozen issues. Among the impressive list of writers who contributed to the magazine in its short life were Paul Bowles, Tennessee Williams and Charles Bukowski. Issues one to four are available to buy online.

When I wrote to thank Nancy for the gift of the Mediterranean Review, I asked her if she would be interviewed by me. She kindly wrote back with her answers, which have been edited by me.

How and why did you apply to the Mediterranean Institute of Dowling College?

It was January, 1969 when I saw a flyer tacked to  a bulletin board at my school, Carleton College in Northfield, Minnesota. I was an English major thinking of a junior year abroad. Or more to the point, it was damned cold outside and I was looking for a break from studying Paradise Lost  as well as the intensity of anti-war politics and the black power movement. And then there was my mother, who had discovered my birth control pills in the bureau drawer, and that boyfriend. Time to Get Away!

The Mediterranean Institute didn’t yet exist – the flyer announced its first year, which began in September, 1969 – and I’d never heard of Dowling College, a fairly obscure small school on Long Island. But wat the heck, nine months devoted to “creative writing and the arts” in Majorca (where was that?) didn’t sound too bad. I applied and got in. Carleton went along with the idea, promising me full credit for courses taken.

Let’s face it, the Institute was something of a scam. Yes, courses were offered, but both students and faculty were, shall we say, more interested in other pursuits. For the two Dowling faculty members who dreamed it up, Robert DeMaria and George Cockroft, this was a way to get paid for hanging out in Robert Graves’s home village. The twenty or so students they admitted were a mixed bunch, about half from Dowling and the rest from other US colleges. We all had “creative” impulses, writing or art, and took the Institute’s courses pretty casually. We lived in a pension on the town’s southern edge, normally closed during the tourist off-season, and settled into the relaxed rhythm of village life. Most days we hiked down to the cala. Many evenings we gathered at a faculty home, often to listen to a visiting writer.

Who were these visitors?

DeMaria attracted some literary luminaries that first year. The first one I remember was Anthony Burgess, who wrote A Clockwork Orange back in 1962. The Stanley Kubrick film was probably underway, it came out in 1971. Burgess was a heavy drinker, we didn’t see much of him (at least I didn’t). Then came Colin Wilson, who’d had a big hit with The Outsider in 1956. He was working hard on his second big book, The Occult: A History, and I know he wanted to talk to Robert Graves about their shared interests in mythology,  spirituality and so on in the ancient world.

He had lots to chew over with George Cockcroft (pen name, Luke Rhinehart) too, since Cockcroft was writing The Dice Man which went on to became a cult classic for fans of “dice living,” or making all decisions based on a throw of the dice. This was another form of anti-rationalism, which permeated lots of those nights: tarot cards, the I Ching, the Bhagavad-Gita, Anais Nin, Carlos Castaneda, Gurdjieff, the Kabbalah, telepathy, and so on, and so on. 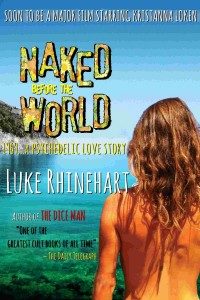 Have you read George/Luke’s Naked Before the World, set in Deia and based on his time at the Institute?

I have. It gives a hint about, why, maybe, the Mediterranean Institute lasted only a single year.

What about Robert Graves?

He was certainly a presence in the village, and he swam every day at the cala. I can point out the rock he dived from. He gave one or two readings during the year, and he attended a couple of others, but he had no formal role in the Institute. I’m sorry to say that, although we knew he was one of the giants of British writing, most students knew very little about his work in the classics, or his memoirs of the Great War. This was several years before the TV series I Claudius was aired in the US and I was able to earn points by casually dropping Graves’ name into dinner conversations. But I never tried to get to know him. A missed opportunity!

Other opportunities, we had plenty. We gradually found our way around the island, hitching to Soller and taking buses, trains from there. A couple of students, being brash young Americans, bought cars. Sometimes we went to class. I had taken Spanish in high school, so I was simply assigned some books to read and write reports – most other students were at level one. But everybody made do with sign language since the villagers didn’t speak much Spanish either. They spoke Mallorquin among themselves. There were classes on world literature and visual arts, with sketching, painting, and sculpture taught by William Ross Abrams, an American artist who lived in Deya.

The class I remember best was music history, taught by Fred Grunfeld. Fred and his wife, Toby Molenaar, hosted us in their village home, playing tapes and LPs – what albums were called back then – in the living room. Fred was writing The Art and Times of the Guitar at the time, so we heard a lot of Spanish music, plus local folk music that had been recorded in Mallorca by Alan Lomax, plus jazz.

Fred was the faculty member, in my recollection anyway, who put most effort into exposing us to new experiences. We visited Chopin’s rooms in Valldemossa, toured the cathedral in Palma, and took a ferry trip to Barcelona led by Fred. La Sagrada Familia was just a third the size it is now. This was Franco’s Spain and times were tough in Catalonia. The ferry was overnight, nobody wanted to sleep in our cramped berths, so we stayed on the deck all night playing cards and listening to Fred play the guitar.

Sadly, or perhaps just inevitably, Fred’s interaction with the Insitute led to the break-up of his marriage. He left his wife and moved to New York with a female student after the school year ended. Toby was an accomplished photographer, who had a distinguished career herself. You can check out her memoirs, The Accidental Feminist, for some fine descriptions of life in Deia and recollections of her own friendship with Graves. Fred died in 1987. Both Toby and Fred went on to other marriages, and they had children who went on living in Deia for years. I hope none of them blamed or resented the Institute. 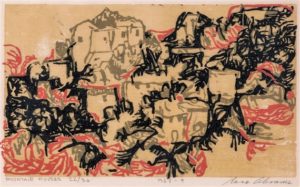 How do you feel about your time at the Institute now?

Most study abroad programmes nowadays are just one semester, emphasising language skills and/or practical experience. We didn’t get much of either. But like the saying goes, the best education doesn’t come from books.

One way or another, those nine months at the Mediterranean Institute stood me in good stead, or at least didn’t do lasting damage. I went back to Minnesota, back to the English major, and then joined a group of Carleton students who started an alternative weekly paper, the Reader, in Chicago. I was part of the first wave of gentrification, baby boomers who our back on the suburbs and moved back into American inner cities. I think my time at the Institute must have had something to do with that.

For years and years I refused to come back to Majorca, convinced that it must have been ruined by tourism and modern life. Then, in 2008, curiosity took over and my husband and I visited Deia for a few days. The village and its surroundings are every bit as magical, though different, as they were back then. We’ve been back twice since then. The twisted olive trees, the blue waters of the cala, the stations of the cross along village pathways. All are still here, still lovely, and still dear to my heart. Take good care of them, OK?

We will, Nancy. Many thanks for sharing your story of the village with us.

Curious about the Mediterranean Review? Pick up a copy here.