Cycling in Mallorca – the season is upon us and how do we feel about that?March 15, 2018

This is the time of year when cyclists begin to appear on the roads of Mallorca. Those of us who live on the island usually have mixed feelings about cycling in Mallorca. With this in mind, I thought I’d talk to someone who sees the cycling situation from both sides. 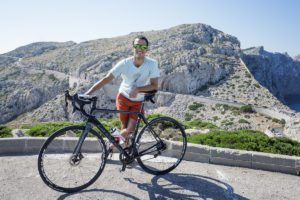 Alfonso Ochoa is originally from Venezuela but has lived in Mallorca permanently for around four and a half years. He’s very much a creature of the outdoors and a firm believer that travelling should be active, responsible and sustainable. Alfonso has probably cycled, sailed, swum or run every inch of the island.

Mills and Honey Cycling Mallorca, Fonso’s company, plans, organises and operates cycling, multi-activity and active holidays at all levels. Fonso’s philosophy is that his clients are guests on the island and should be treated that way.

What are some of your favourite places for cycling in Mallorca, Fonso?

The centre of the island has a fantastic network of little country roads that are quiet throughout the year. You head a little west along the foothills of the Tramuntana and into the area around Selva, Caimari and Binissalem. It’s so charming and you can find a surprising number of great restaurants in tiny little villages.

The west and northwest of the island are also spectacular, especially the Tramuntana Mountains. Here you find the three classic island rides. Cap Formentor Lighthouse from Pollensa is seriously dramatic. Sa Calobra is one of the most famous pieces of roads and cycling climbs in the world – bucket list material for many cyclists. Soller to Sant Elm via Deià and Valldemossa is probably my favourite ride and one of the most amazing pieces of road I’ve ridden on anywhere in the world.

Nearly all the tours I do finish with this ride and we then have one final night in Palma.

You’re a dedicated cyclist and your business involves cycling. How do you feel about the debate for and against cycling in Mallorca?

Let me start by saying that I’m also a driver and I also get frustrated by cyclists. I think we can all agree that we see plenty of dangerous, unsupervised cycling in Mallorca. But, you also need to add to the equation farmers driving tractors and trailers, a huge number of cars including an uncontrolled number of rental vehicles driven by impatient tourists. Then you have buses that are ridiculously oversized for the roads they drive on. It’s a recipe for disaster. 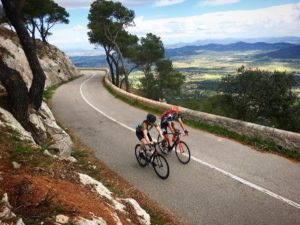 I have to say that nearly all our guests tell us that they find drivers on the island to be kind to cyclists. This is probably because most local drivers know someone who cycles or has something to do with cycling in Mallorca.

What is your answer to people who complain about cyclists?

I’d suggest you go cycling. This will make you realise how dangerous some drivers can be as well as appreciate the unsafe situations you’ve possibly contributed to in the past. You could also think about someone you know who cycles and ask yourself if you’d honk your horn or shout abuse at them. And don’t forget that cyclists are entitled to be on the road.

What would you do to change the situation?

For me change begins with education at a philosophical level. We need to get out of the habit of putting ourselves first, of thinking we’re more important than the person ahead of us, that our time is more valuable.

Practically, it has to start with government regulation. The number of rental cars on the island should be regulated. Regulation exists limiting the number of cyclists allowed in a group but the maximum size of a peloton – a pack cycling together – should also be reduced. Especially between March and May and September and October. 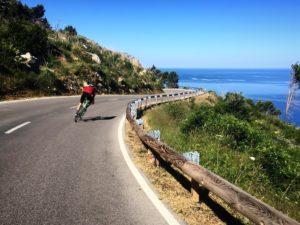 I’d also suggest that groups of more than 10 cyclists should be accompanied by a local or resident foreign guide, trained by the government. This would give local people jobs and reduce the number of guides working unofficially for foreign companies. Improving the number and quality of officially trained guides would raise standards and the cost of cycling in Mallorca. Raising the cost of cycling would create less congestion on the roads and reduce the environmental impact.

We could also introduce cycling policemen.

I would reduce the number of private tourist buses in the Tramuntana dramatically. I would swap some of the huge public transport buses that are often almost empty for smaller, more frequent, electric shuttles. I’d consider creating cable car routes in places like Sa Calobra and Formentor. I’d also think about making certain routes cycling only at specific times. For example, if you know there won’t be any traffic on the road to Formentor or Sa Calobra, on a Thursday morning this could become a cycling-only time.

This last question is a bit ghoulish. I’ve been told by more than one person that Mallorca is a great place to get an organ transplant because so many cyclists are killed on the island’s roads. Have you ever heard that rumour and what do you think about it?

This is an exaggeration. Given the number of cyclists in Mallorca in the season, you’d be surprised how seldom you hear about fatalities. I’ve probably heard of five in the last five years. But, of course, that’s still five too many. No cyclist should die on the road.