Every month we bring to your attention a tiny part of the wonderful West Coast of Mallorca. Fornalutx has been voted one of the most beautiful villages in the whole of Spain. Tucked away in the foothills of the Tramuntana mountains above Soller, Fornalutx is an absolute gem.

One spring morning over twenty years ago, I walked from Soller to Fornalutx for the first time. My guide was a patriotic Mallorquin friend, the daughter of a journalist and writer who was close to Robert Graves and Joan Miro.

As we wandered out of Soller up towards Fornalutx, past ancient stone houses and across streams filled with clear mountain water, my friend told stories of her father.

During the time of Franco, when it was forbidden to write in Catalan, he wrote articles that appeared innocuous in Castilian Spanish for one of the Mallorquin newspapers. In these articles, which I think were restaurant reviews, were anti-Franco messages written in a code that the journalist had whispered to his friends. The thousands of tourists who came to the island from all over Europe had no idea that these acts of resistance, hidden in plain sight, were taking place.

Fornalutx has been voted one of the prettiest villages in Spain for good reason.

We stopped where the fragrant orange and lemon groves that surround Fornalutx begin and my friend cried a little for her father. Wiping her eyes, she stood up and declaimed a poem in Mallorquin. I had no idea what the poem was about but she had, and has, a beautiful, rolling, sonorous voice.

The last part of the walk up to Fornalutx is quite steep. Conserving our breath, we walked into the centre of the village in silence and took a seat at one of the cafés in the tiny village square in the cool shadow of the church.

I thought then as I do now, that Fornalutx is one of the most beautiful places on earth.

A place in which to be

I’m obviously not alone in thinking this. Fornalutx has been voted one of the prettiest villages in Spain for good reason. At the right time of day or year, the village is exquisite.

The handkerchief-sized village square, grandly named Placa d’Espanya, is bordered by cafes. This makes it the perfect place to sit, take coffee and an ensaimada and contemplate the meaning of life in the shadow of the gorgeous gothic church, built in 1639.

On summer nights, the square occasionally resounds to the sound of music. I once saw Deià’s own Pa Amb Oli band play a show under the stars that mixed vintage rock and roll and a storybook location.

At the moment, Fornalutx’s annual bull run also takes place in and around the square. It’s one of the few villages in Spain that still does this, which I find somewhat strange.

Apart from the square, there’s not much to Fornalutx, I’m delighted to say.

The streets above the church are cobbled and pedestrianised, which makes them nice and peaceful. There’s an amazing bakery named the Panaderia de Fornalutx (a favourite of Charles Marlow’s Maria Garde) not far from the square. It’s still possible to wash yourself or your clothes in fresh mountain water at the public washing house, tucked away down a side street, just as the people of Fornalutx have done for centuries.

But, really, Fornalutx is a place to be.

My absolute favourite thing to do in Fornalutx is to take lunch at Es turo restaurant.

Es turo is a short walk out of the village proper, on the road that heads up into the mountains. It’s a traditionally Mallorquin place. The tumbet is particularly good, as are the pork and lamb. On my first visit to Es turo with my Mallorquin poet-patriot guide, I seem to remember her devouring a serious looking piece of meat with a foot attached.

They also have one of those dessert menus where you can choose ice-cream that comes in the shape of a plastic cow as well as hollowed out oranges and lemons filled with ice-cream. This, for me, is the essence of classical touristic Spain.

Although the food is fine, the real reason I always head for Es turo is to feast on the view. Take a table on the terrace to the side of the restaurant or near a window and you can see clear down the valley to the sea and up into the mountains.

It’s a view that has remained essentially unchanged since Fornalutx was nothing more than a solitary Arab farm.

And this is the secret to appreciating Fornalutx. It’s all about taking your time to enjoy the timeless pleasures of life in Mallorca. One of which is to enjoy simple food and good wine in gorgeous surroundings, without being in a tearing hurry. As my friend’s father would no doubt have told you.

Properties with potential in and around Fornalutx

Every one of the properties we currently offer boasts wonderful views. 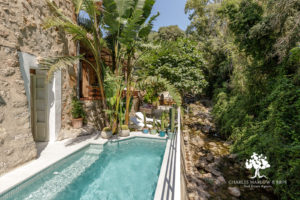 El Molino is a beautiful home with plenty of light in the most tranquil of settings, just down the steps from the Town Hall.

If you’re looking for a home a short walk from the heart of the village with a pool, Es Molino – part of a small community – is ideal. 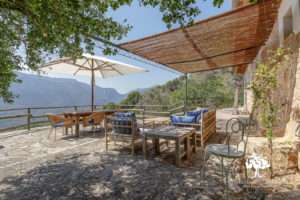 Casa Amapolas is a peaceful rustic hideaway that oozes style, just 5 minutes’ drive from Fornalutx and 10 minutes from Port Soller.

This chic home has a pool area with fabulous views of the valley. 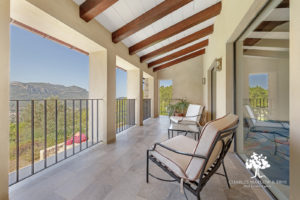 Finca Puig is a luxurious five-bedroom mansion with an extra two bedrooms in a private casita set apart from the main house in a large plot of terraced land with breathtaking views of the entire Soller Valley.

View all the properties we offer in Fornalutx here.

If you do decide to walk up to Fornalutx from Soller, and I hope you do, it’s worth bearing in mind that there are only two taxis in the village. Also, taxis from Soller are not allowed to pick up in Fornalutx.

So, especially if you stay for a long lunch, it’s a good idea to book a taxi back to Soller a few hours or so before the time you’d like to leave. There’s also a bus but it’s not exactly frequent.

We’d love to tell you more about the potentially splendid homes we have for you to view in Fornalutx. Feel free to email us at hello@charlesmarlow.com or call +34 971 636 427.