On 27 October, legendary singer-songwriter Donovan will be giving an intimate performance for just 50 people in the auditorium of La Casa de Robert Graves in Deià. Before Donovan performs, he will be chatting with guests, drinks will be served, and the house will be open.

Earlier this week, I had the great privilege of talking with Donovan about his life and work, his strong feelings of connection with Graves and what we can look forward to on 27 October.

Donovan is an icon of the 1960s and his music helped define its soundtrack. Born in Glasgow, Scotland in 1946, he became famous overnight in 1965 when he appeared on the British pop TV series Ready Steady Go singing Catch the Wind, his first single. He went on to have hits all over the world, including in the US. In 1966, Sunshine Superman topped the Billboard Hot 100. The woozy, atmospheric and slightly sinister Hurdy Gurdy Man went top 5 in the UK and US.

Hurdy Gurdy Man was recenrtly used to great effect as the theme song for the TV series Britannia.

Throughout the 1960s, Donovan was in the eye of the cultural storm that transformed so much of mainstream culture. He was a friend of Bob Dylan and The Beatles, teaching John Lennon the finger-picking guitar style he used in songs that include Dear Prudence.

Always musically eclectic and distinctive, Donovan’s style blended folk, jazz, pop, psychedelia and pop music. His most recent album, 2004’s Beat Café, is well worth seeking out. He has stayed faithful to his muse. In 2012, Donovan was inducted into the Rock and Roll Hall of Fame and, in 2014, The Songwriters Hall of Fame.

Paradise halfway up a mountain

Donovan isn’t entirely sure when he first bought a house in Mallorca. He lives halfway up a mountain between Manacor and Colònia de Sant Pere on the north east coast of the island with his wife Linda in a renovated animal house. ‘It’s paradise,’ he says.

When we spoke, there was a strange noise in the background that might have been chickens or some kind of weird chatter coming through in waves from who knows what dimension. It was most appropriate. Our conversation was wonderfully free-ranging, touching on, among other things, the similarities between Scottish and Japanese sea shanties, Ravel’s bolero, the philosopher Schopenhauer, the healing music made by the musicians of the tiny village of Joujouka in Morocco and the longevity of Donovan’s great song Season of the Witch.

Donovan’s accent shifts shape as his conversation flow, from Scottish to Irish to English and back.

An interview with Donovan

I began by asking Donovan what his connection was to Robert Graves. ‘I come from the tradition, David,’ he said. ‘My Scots-Irish father Donald read me poetry when I was very young. I knew all about the four-line stanzas by the age of two. He was a bit of an old bard, Donald was, and I loved him very much. Until television grabbed people by the balls, they used to sing and recite poems and monologues and tales. That’s how I was brought up in the late 1940s and into the 50s. Then, at the age of 14 or 15, in 1960, when I started hanging out with older bohemians, I began absorbing other things. Slowly, I got around to Graves’s The White Goddess and that was fascinating. Since then, I’ve always been intrigued by Robert. And I rediscovered in myself that I came from a Gaelic, so-called Irish, background. I realised that if I knew everything by the age of 18 and could listen to certain songs and learn them in 20 minutes, and I could perform and compose effortlessly, I must be a reincarnated bard in some way. So, when I recorded my first song Catch the Wind I had a mission. Do you know what that was?’

‘I thought the way I could be of help in this modern, suffering world of two world wars, a depression and a nuclear catastrophe threatening the future was to bring poetry back to popular culture. And with poetry you bring everything else in the bohemian manifesto, the tools for change in a world bent on destroying itself. That’s my little speech.’

How did he discover La Casa de Robert Graves? ‘It was my life-long muse and wife Linda and her sister Carol who first found Deià through our friend Nigel Kennedy. They went to the village and met a famous painter [I think this might be Mati Klarwein] and said I should go up there. Years later I did. Since then, our dear and close family friend Francesca Marks who lives and writes her books in Deià has been our auspicious connection to the Graves family. Both Linda and I are most grateful. The Karmic Dance continues! About a year and a half ago, I walked into La Casa de Robert Graves. I said to myself, this is amazing, what have we got here? We’ve got a connection. I’ve always sung poetry. I thought, why don’t I get in touch with the family. I met William and Tomás Graves and said, one of these days I’d like to do something to raise money for the house and that’s what I’m doing. So that’s my story.’

What did he think Graves got from Mallorca? ‘I think the fact that there was still an agricultural cycle going on here was a great attraction for him. He was surrounded by the actual turning of the year, the wheeling of the stars, and the people were bound to the calendar. That’s what he says. The true poet is in service to the year and the great mythological tales the bards recite to the tribes over the millennia remind everyone that there are phases in life as there are in the year. It’s our job, David, and I must have known it in previous lives. I also appreciate the fact that Graves was talking about myth. This was always considered an untruth but that’s wrong. Myth is the symbolic language of the inner world of humans as they’re born into the cycle of life.’

I asked Donovan if he could give me some idea of the form the evening would take. ‘I’ll sing all my popular songs and read a couple of poems. I may do an impro based on one of Robert’s poems. William Graves has given me a rhyming set of lines and I might have some fun there. I’ll also be playing some of my first recordings, made when I was 18. The performance starts at six and lasts for around an hour and a half, with an interval, but apart from that it’s open-ended.’

Donovan paused before saying ‘The poet Donovan of the pop world is paying tribute to Robert Graves, who stirred up the dark regions of the inner psyche by presenting his book The White Goddess and the power of poetry.’

I have no doubt the performance will be utterly special. It will certainly be for an excellent cause. As William Graves told me ‘The funds are being raised for the Graves house. I would like them to provide a removable sun shade for our terrace to allow us to have the odd event, poetry reading and concert outside during the daytime.’

Drinks will be served before Donovan performs, provided by the Belmond La Residencia hotel in Deià. Ulisses Marrieros, General Manager of the hotel, said ‘La Casa de Robert Graves contributes enormously to the cultural life of Deià and we’re proud to support what promises to be a magical performance by a musical legend. We are always delighted to recommend a visit to the house to all our guests who love to discover more about one of the people that has done so much to make Deiá such a unique cultural hub.’

If you can’t make the performance, I do urge you to visit La Casa de Robert Graves which is open all winter. It’s a terrifically inspiring place. 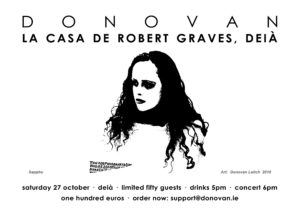 Tickets are E100 and available from support@donovan.ie. There are only 50 and these will probably go quickly so I’d suggest you buy yours now.

The image for the poster is original art by Donovan. Photo of Donovan by Michael Collopy, Donovan Discs 2018. Photo of Schopenhauer quote, Donovan 2012.