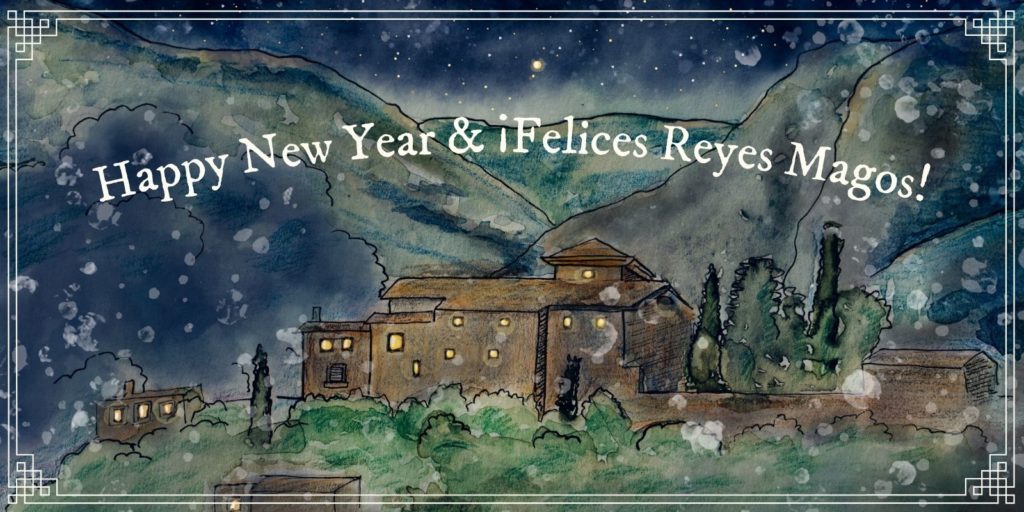 The older lady raised her sunglasses. “Of course Carmen”

Sliding her glasses back onto her nose, Polly moved her coffee closer to her side of the round table, shifted her straw sesta from the chair opposite so Carmen could sit down.

Carmen looked down the valley that fell away from the terrace of Sa Font Fresca to the sea, closed her eyes and took a deep breath. “Champagne air,” she said. “How was Christmas for you?”

Polly smiled. “Not how I’d planned it, darling.”

“You know me dear. I always arrange a big family get together at Christmas. All the children come back from wherever they are in the world, and the grandchildren. I organize caterers. The works. I suppose I go a bit over the top but,” Polly shrugged, “Richard’s not here anymore. And it’s the only time we all get together.”

Carmen, who was happy to spend Christmas as far away from her family as possible, nodded.

Polly sipped her coffee. “By December 20th everyone had cancelled. Some couldn’t get to the island at all. Those that could felt it was too much of a risk. I told them they didn’t need to worry about passing that blasted virus on to me but they still didn’t want to risk it. It was awful. I was left facing the prospect of Christmas all alone.”

“You should have called me,” Carmen said.

Both ladies knew that would never have happened.

A potentially awkward moment was averted when the daughter of Tolo the owner arrived to take Carmen’s order, pan con tomate and a cortado.

“What did you do?” Carmen said.

Polly sipped her coffee, moistened her lips. “Let me tell you, I thought it was going to be a disaster, especially when the caterers – a darling young Mallorcan couple from Palma – told me they’d ordered all the ingredients and prepared most of the food and I would still have to pay. But it all worked out wonderfully well.”

Polly continued. “It turned out that the caterers, they’re called Grow or Life or something like that, have been making meals for the homeless. The girl suggested that, as I’d already paid for it, they make the food anyway and give it away. At first I wasn’t too happy about that. I thought about asking her to at least offer it to her other clients or to a restaurant so I could get some of my money back. You know?”

“Then I realized how silly I was being. It’s not like I need the money. The girl, I wish I could remember her name, said why didn’t she ask this Senegalese guy she knows if he knew people who’d appreciate a warm meal on Christmas Day. He’s a singer I think. Played up here at Sa Fonda a few times apparently.”

The waitress arrived with Carmen’s steaming coffee and the plate of pan con tomate. “Careful, it’s hot,” she said.

Carmen thought of the African boy she’d seen standing outside McDonalds at the top of the Born in Palma a day or so before Christmas, painfully thin, huge eyes, skin grey-blue, dancing from one foot to the other to keep warm, a Father Christmas hat sagging on his narrow head, one in each hand and a bagful at his feet. Why hadn’t she bought him a burger and coffee? The thought had crossed her mind. She shivered. “The Africans are having a tough time of it,” she said.

“Ivan, That’s it,” Polly said. “He thought it was a great idea. But,” she paused. “He wanted me to be with them when they ate the food. As a kind of guest of honour. I said that wasn’t necessary but he absolutely insisted. The caterer, darned if I can remember her name, gave him my number and he called. He’s quite the charmer you know.”

Polly smiled. “I did. And I’m glad. It was absolutely delightful. I took a taxi down to Palma on Christmas morning, to where Ivan lives. Honestly, I had no idea there were places like that in Palma. Quite eye-opening. The caterer met me at Ivan’s house. What is her name? Anyway, she’d brought her hubby and her baby, a most gorgeous little girl, with her. Ivan took us to this club that’s like a sort of social centre. There must have been about 40 or so of the Africans plus us. Well, my dear, we had the most splendid time. There was enough food to feed an army. Far more than I’d ordered, I’m sure. God knows what some of the young men made of the vegan amuse bouche what’s her name had made but they disappeared quickly.”

Carmen thought of the boy outside McDonald’s. She pictured him sniffing a tiny, ornate vegan treat, wrinkling his nose, giggling and then popping it whole into his mouth. The picture made her feel good.

Polly laughed. “And afterwards, Ivan played for oh it must have been two hours. He even sang some Christmas carols, African-style. I thought they were all Muslim but it turns out some of the Nigerians are devoted Christians. And we danced. I haven’t danced like that for years. I had such a fantastic time.”

“It sounds like you did,” Carmen said. “Will it become a tradition?”

“Oh, I don’t know about that,” Polly said somewhat sharply. She softened. “But then again, why not?”

“I hope so,” Carmen said. She tapped her phone and looked at the screen. “Time to open the shop.” She stood up, bent and kissed Polly on each cheek. “Molts d’anys,”

“What does that actually mean?”

Carmen went inside to pay.

“Sonia, that was her name,” Polly said to Carmen’s retreating back. She took off her glasses, closed her eyes and turned her face towards the sun.