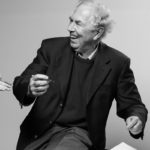 In the 2021 UK New Years Honours List, William Graves, son of Robert, received an MBE for services to British culture and literature in Spain.

William Graves moved to Deià with his family aged five. He recounts his experience of growing up in the village in his wonderful book Wild Olives. In 2006, Ca n’Alluny, the Graves house on the edge of Deià if you’re heading in the direction of Soller, was acquired by the Balearic Government and opened as La Casa de Robert Graves. William has been the driving force behind this writer’s house which preserves the Graves family home as it would have been in the 1930s and 40s ever since.

If you’ve never been, I urge you to do so. As well as giving an insight into Graves’s life, it’s an inspiring place in a tranquil setting.

I caught up with William recently to talk about how he felt about being awarded the MBE. As ever, our conversation was wide ranging and thoroughly entertaining.

Did you know the award was coming, William?

It was entirely unexpected but as soon as it happened, I knew who was behind it.

And who was it?

Anna Nicholas and other friends

(Anna is a writer who lives in Soller and is writing a series of popular thrillers set in the Soller Valley. When I asked her why she campaigned for William to receive the MBE, she told me ‘William has worked tirelessly for a significant part of his life to maintain and promote his father’s works and estate. His persistence in preserving Robert Graves’s house – intact with original artefacts – has attracted thousands of visitors to Deià. It seemed fitting that in his 80th year he should be rewarded for his dedication.’ Quite right.)

How has the MBE affected you?

It doesn’t affect me very much but it does other people which is nice. It’s very useful for local consumption. My siblings seem to be quite happy about it and that’s good enough for me. It’s an honour. I appreciate it and I do what I can to help culture and tourism in Mallorca.

Does it give you gravitas?

I have enough of that. It’s in my name isn’t it? Graves. (Laughs)

What do you think your father would have made of you receiving the MBE?

I don’t think he would have understood what on earth it was about. He lived in very different times in Mallorca.

What was his attitude to honours?

He wouldn’t touch any honour that had a political aspect to it with a bargepole. He turned down the OBE Harold MacMillan’s government offered in him in 1957. As a poet he wanted to be completely free of obligations. Margaret Thatcher offered him the Order of the Companion of Honour when he was 89 but my mother turned that one down. She didn’t like Thatcher.

How about poet laureate?

He was considered for this but again he wouldn’t have accepted. You’re theoretically supposed to write nice things about royalty. But he wouldn’t have wanted to be tied down in that way. He accepted being Professor of Poetry at Oxford and the Queen’s Gold Medal for Poetry.

He was made an adopted son of Deià. But he accepted that to help the village. The Fomento de Turismo de Mallorca gave him their gold medal, as did the Spanish Tourist Office. Those he didn’t really consider as affecting his poetry. Since you can’t translate poetry he felt it was OK.

Speaking of laureates, do you know anything about the progress of The Laureate movie?

I’ve seen snippets. I hear from Julian Glover, who plays my grandfather AP Graves in it, that it looks like it’s going to be a pretty good film. It’s low budget but these can sometimes be a great success. Of course, this is the story of what Robert’s memoir Good-Bye to All That is about. It ends with Laura Riding’s attempted suicide and the two of them heading off to France where he met Gertrude Stein who famously persuaded him to come to Mallorca.

The interesting thing is that he wasn’t actually planning to come here at all.

He intended to go to the Basque country, I suspect because there was a good boat service from Bilbao to Southampton or wherever and he felt he could be closer to Britain. But Gertrude convinced him to come here.

Almost a hundred years after your father arrived here, how do you think Brexit will affect relations between the British and the Mallorcans?

I don’t think it will make any difference at all and I don’t see why it should. There have been English people on the island since the interwar period at least. The Brits are part of the landscape now and the Mallorcans are used to having us around.

How has La Casa de Robert Graves been affected by COVID-19 and the fallout from it?

In terms of visitors, disastrously. They dropped from 6,500 a year including schools to about 1000. However, we have around €25,000 of wages subsidized by the Spanish government so we’ve come out OK. Now I’m making the most of the fact that we don’t have many people to do a few repairs in the house while it’s empty. I try to keep the whole of the house with its 1930s and 40s feel.

I hope to eventually have the funds to open the 10,000 meters of land below the house, with its olive grove and little amphitheatre, to the public.

I’ve been there. It’s lovely. Could you do public performances?

It is lovely but it’s small. You could only get 30 people. Still, it’s one of the things that’s on the cards to fix up. We just need the funds.

Are you open now?

We’re open all year round.

What are your thoughts about the immediate future for tourism in Mallorca generally?

Well, my particular area of interest is culture, especially literature, and there’s still so much literary history we can share with visitors to the island. Just to give you a couple of examples, there’s a bench in the beautiful garden of the house that used to belong to the painter Juan Junyer where DH Lawrence sat. These are the things people don’t know about but which literary pilgrims would love to experience. And then you have WB Yeats who spent a winter in Mallorca in 1935 in Cala Mayor in the hotel Principe Alfonso.

I know it. I think the Principe Alfonso is now a smart restaurant.

It may well be. My point is that we have such a rich cultural history and we’re constantly uncovering more fascinating details. There’s a chap called Eduardo Moya who did his thesis on all the foreigners who came here in the 1930s and has published a book on the subject. I’m inviting him to the board of the Robert Graves Foundation because we want to broaden our scope to cover other British writers as well.

I’ve always been intrigued by the fact that there were all these Latin American writers in Deià who had no connection with your father but came for entirely different reasons.

The fellow who originally brought them to the village was Carlos Obregón from Bogota, Columbia. He came to Deià in the 1950s, I believe it was, and people followed him. We used to call him ‘Carlos Demoni’ because when he drank he went to commune with his devils in the cemetery. Claribel Alegria had a house here. Gabriel Garcia Marquez visited. Claribel translated Robert’s poems but there was little cross culture. Jorge Luis Borges came to Deià especially to see Robert.