Celebrating and supporting Deià artists – it starts in our office art galleryApril 12, 2021 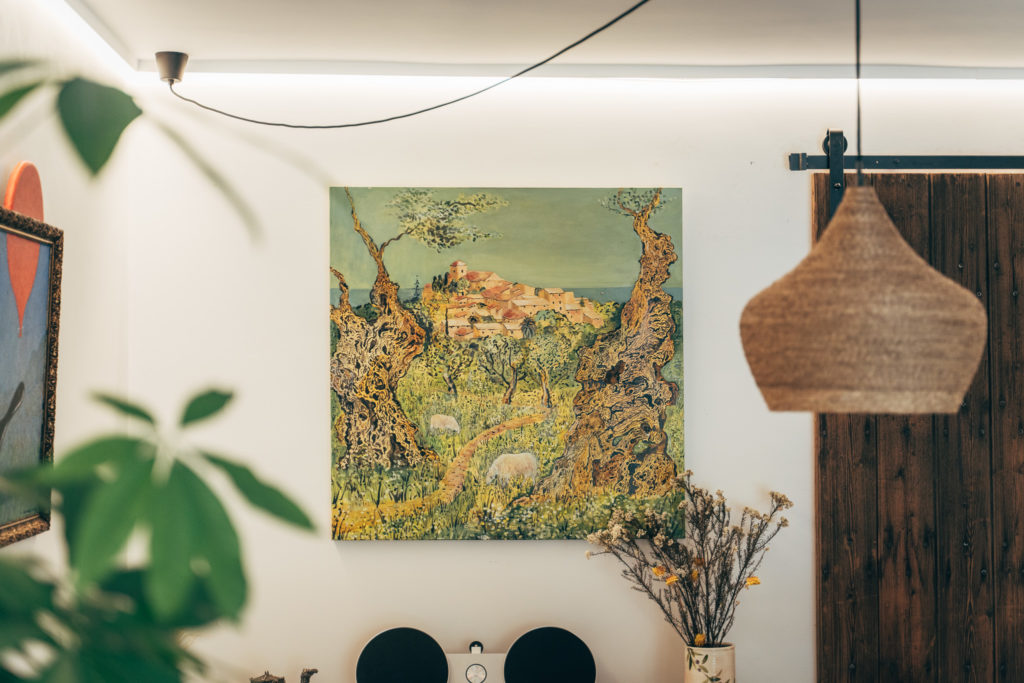 From the very beginning, Charles Marlow has supported the Deià artists who do so much to enhance the cultural life of the village and help make this such a stimulating place to live.

As Charles Marlow co-founder and co-owner Patrick Hill says, ‘It goes without saying art is a huge part of the fabric of Deià. We are so lucky to be surrounded by such talent and I love coming into the office and seeing the new paintings we have been showcasing.’

Maria Garde, Charles Marlow’s West Coast Sales Director for Mallorca adds, ‘We feel privileged to have such beautiful work hanging in our office and love seeing the Deià artists reap the rewards for their talents.’

Renovating our office recently gave us the opportunity to see the paintings we exhibit in a fresh light. Which, in turn, made us keen to catch up with the Deià artists and find out what they’re up to.

We spoke to Manuella Holló, Arturo Rhodes and David Templeton. 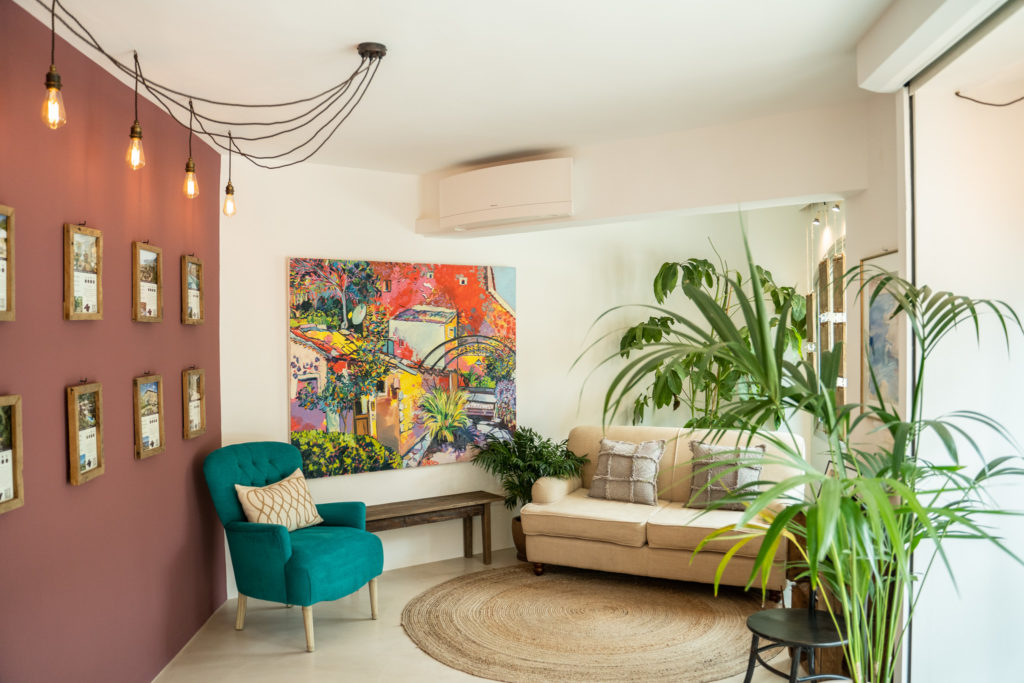 The vibrant painting from nature of Manuella Holló

Hungarian Manuella Holló moved to Deià from Palma six years ago this April, after she came to one of the fantastic Saturday morning Wake Up Dance! sessions organised in the village by Llewellyn Graves and sorely missed.

She met Deià artist Arturo Rhodes at the dance and felt compelled to move to the village. When she moved, ‘all the doors opened for me, a job came quickly, I found a flat and a welcoming community.’

As a self-described ‘high energy painter’ who likes to paint outside in nature to feel and reflect what is happening around her, Manuella is very much at home in Deià and as a Deià artist.

The wonderfully vibrant and uplifting painting of Manuella’s in the Charles Marlow office is called Mediterranean Playground. It was painted in one of Manuella’s favourite gardens in Deià, down in The Clot.

April seems to be a significant month for Manuella. She moved here at this time. Her baby Leo was born in April last year and now it feels like Deià and the island are beginning to come to life again.

As it’s spring, Manuella is busy preparing a new series of abstract paintings in a new environment in Ses Salines . ‘I am using mixed media now,’ she says, ‘and experimenting with prism photography and camera obscura while combining different graphic techniques like cianotipia – a photographic printing process that produces a cyan-blue print – with classical materials.’ 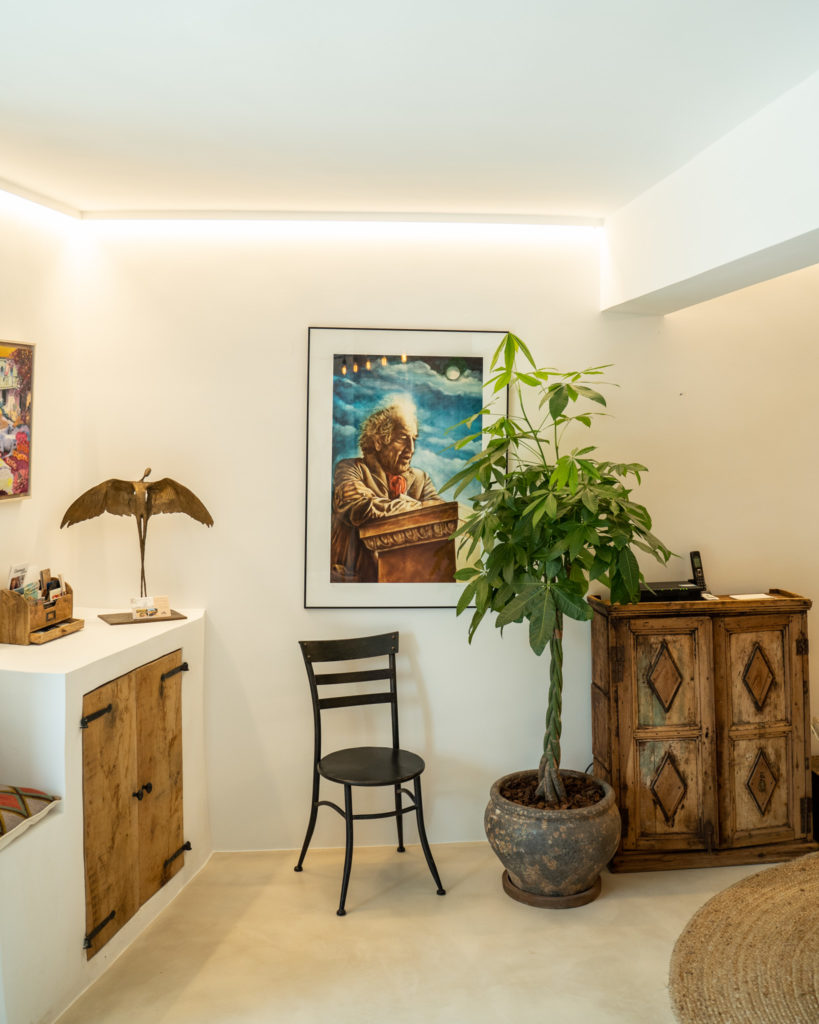 David Templeton and the towering figure of Robert Graves

David Templeton’s paintings, drawings and collages are highly appreciated by collectors and can be found in homes in the village and across the world.

When you speak to David, one of the things that becomes immediately apparent is his deep knowledge of the cultural history of Deià and its various mythologies.

David was fortunate to encounter the poet and writer Robert Graves, who lived in Deià for most of his life. Remarkably, he drew Robert every Wednesday morning for four years until the day before he died in Deià, on 7 December 1985. Graves was 90.

As David told us, ‘I made hundreds of studies at Canellun, the Graves house. After Robert’s death, I was commissioned to make a painting of him to hang in the El Olivo restaurant at La Residencia. It hung there for several years.’

The painting is called Robert Graves, Mito, Spanish for myth – highly appropriate considering how Robert Graves is depicted by David.

As is the case with all the work in the Charles Marlow office, Robert Graves, Mito is for sale and David has large fine art lithographs available as well as many original drawings and a limited edition of lithographs.

Find out more about David’s work by emailing him at davidtem@gmail.com. Follow him on Insta @templeton_david. 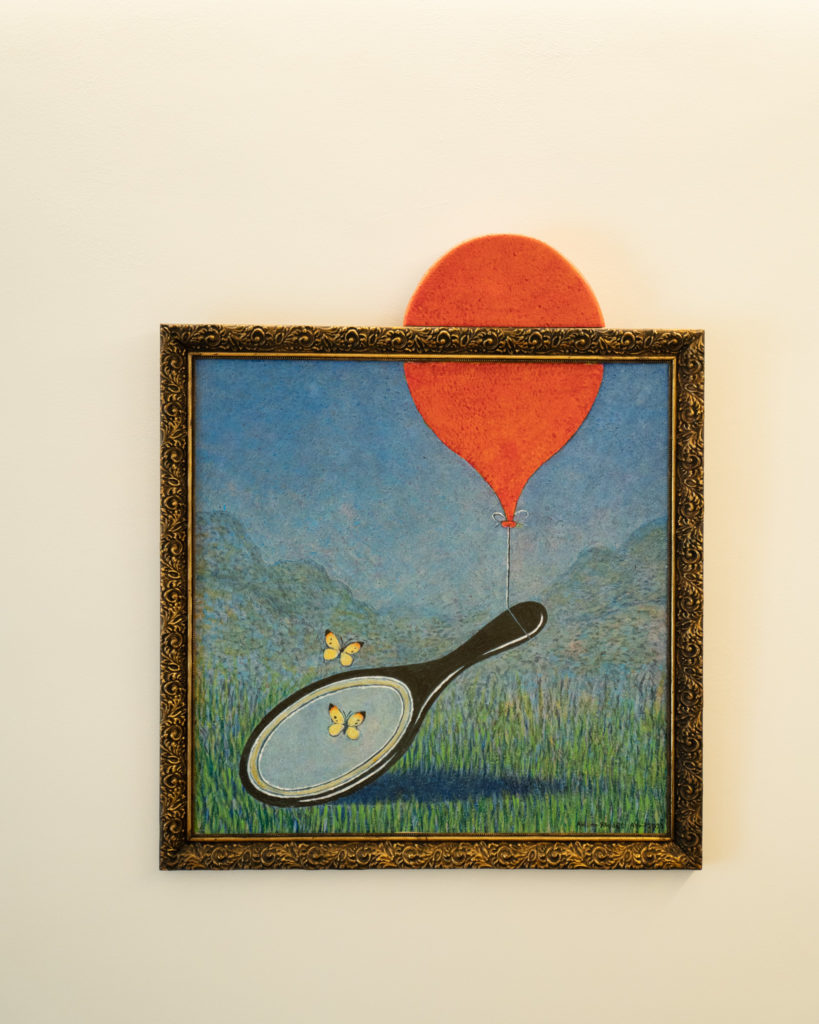 Arturo Rhodes – art of the imagination

The work of Arturo Rhodes is among the most wildly imaginative of the Deià artists so it seemed fitting to invite him to tell the story behind this piece, part of his ‘Think outside the box’ collection.

Arturo wrote the story down longhand and dictated it to me over the phone. It was such a good story that we didn’t realise until afterwards that he’d told us about another painting entirely – The Goldfish Bowl, painted in 1985/86.

In the firm belief that mistakes make art, we’ve decided to leave the story as it is. (Feel free to imagine what the goldfish bowl paintings look like.)

This is what Arturo told us.

I had recently returned to Deià from a year in Africa and was zero in finances. It was a truly amazing experience but I’d blown all my savings on the trip. I had no house, but my old car was sort of my home for a few weeks.

Sitting in a café, having coffee and a croissant for breakfast, a girl who was cleaning the inside glass of the restaurant window caught my eye. It was one of those instant love moments that happen so rarely in life.

From nowhere, I drew a little sketch on the table napkin while enjoying my breakfast. I drew a fishbowl with one goldfish within and another swimming outside the bowl that continued in the larger ocean. It seemed symbolic of my situation. Her behind the glass and me in the bowl or vice-versa.

It was just before Easter and someone had given me a room at short notice. I found an egg in the refrigerator and painted the same image of the fish as I’d drawn on the napkin in watercolour on the hardboiled egg. One in the bowl and one swimming outside. The egg had been hardboiled so it had a nice, solid base.

On Easter Sunday I returned to the restaurant and gave the egg to the girl, who was working behind the bar. She was very surprised, but, she said ‘I love the egg.’

When I saw her another day, she said ‘I really love the egg fish painting.’ She added that her boyfriend loved the egg painting idea also.

One evening I passed them walking hand in hand down the main street of Deià and chatted with them. They thanked me for the gift.

After that, I gradually pulled myself out of the drama of coming back home to start from zero. I did odd jobs and painted again, producing a series of goldfish paintings that became a successful exhibition with a performance on the opening night. I wore a bright orange goldfish hat and costume and kept drinking water and spitting it out. People loved it.

I became good friends with the goldfish girl and her man. They were married a year later and went on to have two children, both boys.

Time passed and I heard one day they had separated and were living apart. After they divorced, I saw her with other goldfish partners over the years. I saw her recently in the main street of Valldemossa. We chatted about the days of our youth. She had become a girl in her mid-40s, heavier and with lines of age and experience showing on her face but as tender as ever, her smile as radiant as ever. We said our farewells, parted and went on our separate paths to continue with our individual lives.

I thought of the inspiration she had given me.

Over the years, I painted numerous versions of the fishbowl painting including a fishbowl in an ocean, one goldfish swimming in the bowl and one outside gazing in.

And, next time you’re in the village, please feel free to pop into our office and view the work on our walls by Deià artists. The work is all for sale. Charles Marlow takes no commission, so the proceeds go directly to the Deià artists who help make this such a wonderful village.