The Beatles, Robert Graves and a Mallorca film festivalNovember 5, 2021 The Beatles And India and The Laureate, two films with intriguing connections to Mallorca were, for me, the highlights of the 10th Evolution! Mallorca International Film Festival which enjoyed a triumphant finale at the Palau de Congresos de Palma on 2nd November.

The documentary The Beatles And India has been described by The Guardian as the ‘fascinating story of how and why India fell in love with the Beatles’.

John, Paul, George and Ringo travelled to Rishikesh in northern India in February 1968 and stayed at the ashram of Maharishi Mahesh Yogi – the Maharishi for short. Although their visit was inspired by their desire to learn the method of Transcendental Meditation that the Maharishi had developed, it was also rooted in George Harrison’s fascination with India. A fascination that had led him to become friends with sitar player Ravi Shankar and to use the instrument on Beatles records, most famously ‘Norwegian Wood’.

The Beatles relationship with the Maharishi was to come to an unfortunate end, with the band being told that he had made sexual advances to actress Mia Farrow. One of the great revelations of the movie for me was the backstory to this accusation.

While the story is certainly fascinating and the mix of rare archival footage – contrasted with the same location today – recordings and photographs, eye-witness accounts and expert comments is a treat, I couldn’t help but feel that the documentary only skimmed the surface.

There was more emphasis on the Beatles than their effect on India.

Still, if you’re seriously interested in the Beatles, there’s always director Ajoy Bose’s 2018 book, Across The Universe – The Beatles In India to get hold of.

Ajoy and his co-director Pete Compton were at the showing and clearly delighted by the audience response to the movie, which was followed by a live performance of Beatles songs by some of the artists who featured in the movie.

It was no surprise that they did ‘Norwegian Wood’ but I didn’t see some of the other selections coming.

Find out more about The Beatles in India and its wonderful soundtrack here.

If you’re wondering about the connection between The Beatles And India, in the early 1970s the Maharishi established a Transcendental Meditation centre in Mallorca. This, obliquely, is the reason why John and Yoko came to the island. 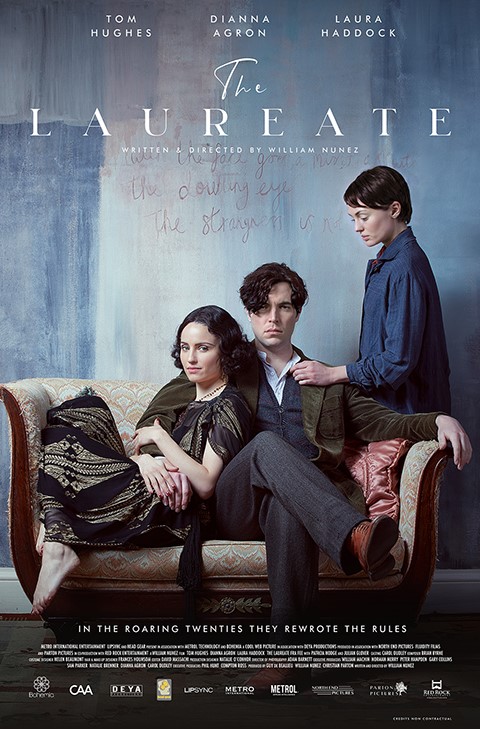 The Laureate concludes the festival

I’m proud to say that, in our humble way, this blog got behind The Laureate early on when I interviewed director William Nunez back in 2020.

So I was keenly anticipating finally seeing the movie which is based on the ménage à trois involving poet Robert Graves, his wife Nancy Nicholson and singular American poet and essayist Laura Riding when they lived together in 1920s England.

The actors were all excellent.

Tom Hughes looked a lot like the young Robert. Diana Agron didn’t look anything like Laura Riding but I’m not sure if that mattered. Laura Haddock, who I’d last seen in the daft but entertaining Ibiza-set Netflix series White Lines, was a revelation.

I found The Laureate to be a perfectly entertaining piece of historical drama.

Despite the fact that William Nunez, a great admirer of Robert and Laura, certainly did his research, he has focused on telling a compelling story.

Whether you’re steeped in Robert Graves’s work and familiar with his story or you’re simply curious, I’d highly recommend you try and see The Laureate.

As for The Laureate’s connection to Mallorca, Robert Graves and Laura Riding came here in 1929. They lived together in Deià until the outbreak of the Spanish Civil War in 1936 forced them to leave Mallorca. Laura didn’t come back but Robert did. He lived in Deià until he died in 1985.

I must admit that I find the fact that the festival is the Evolution! Mallorca International Film Festival a bit confusing. I still don’t quite understand why ‘Evolution!’ is there at all.

But, when I think back to the first ever festival, which I attended, I have to say that it really is evolving. I, for one, am very much looking forward to next year.