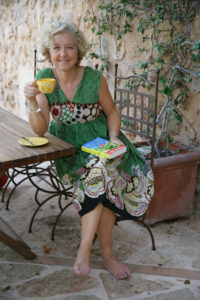 Five years ago I was sitting in my favourite Chinese restaurant in London, the Jade Garden in Chinatown, with Mallorca legend Louie the Lip. We’d just finished the book I’d ghostwritten for him and were celebrating. The woman at the table next to us was talking to a boy opposite her dressed in his school uniform. I guessed he was her son.

When the boy sighed and said he thought he wouldn’t be home in Mallorca for some time, Louie looked up and without missing a beat said ‘Oi oi! Did you say Mallorca?’

We got talking and it turned out she was author Anna Nicholas who lives in the Soller Valley. Anna went on to help Louie and I enormously and we’ll always be grateful to her. On the eve of publication of her latest book A Chorus of Cockerels, I talked to Anna about her life as an author in Mallorca.

When and how did you arrive in Soller, Anna?

My husband Alan, son Ollie and I came here permanently back in 2001, after having visited that magical golden valley, and decided this was where we wanted to live. We were in London before.

How long have you been writing?

Ever since I was a child. I wrote my first book, Rex, when I was ten and my second, an allegory, was accepted by Oxford University Press but I never made the requested changes. I was only sixteen though and didn’t understand how privileged I was. My mother told me when I was seven that in order to become a good writer, I needed to work and live first. I took her at her word.

How would you describe your writing about Mallorca?

I’d say it was semi-autobiographical.

And had anyone else written in this way about the island?

The only other British author who did this was Peter Kerr – and very successfully. He and I are chums and in touch regularly by email. We both have the same publisher. But Peter lived in a different part of the island and was trying to make a living as an orange farmer. And of course he’s a man so his perspective is different.

What do you think are the challenges for an English writer using Spain and Mallorca as material?

I think it’s essential to get under the skin of where you live and to try to learn about the history, society and language of the people. This becomes even more relevant when writing about Mallorca, which has its own very strong identity, culture, traditions and language. Some writers make the mistake of poking fun at the locals. I avoid that at all costs. Yes, there’s humour but it’s gentle and kind. I love Mallorcans and make every effort to integrate and promote their values in my books.

Why do you continue to live in Mallorca?

I can’t imagine living so happily anywhere else.

And are you here for life, as far as anyone can know?

Yes, please! One of my Mallorcan friends told me he was delighted I wasn’t a ‘fly by’ like so many other expats.

How do you see your relationship with the Mallorcans?

Very positively. I do my best to understand Spanish and also Mallorqui but I find the local lingo quite tricky to speak. However, my Mallorcan friends are patient and just laugh if I make a mistake. But much as I feel very integrated and at home in the Soller Valley, I never forget I’m British and a guest on the island. 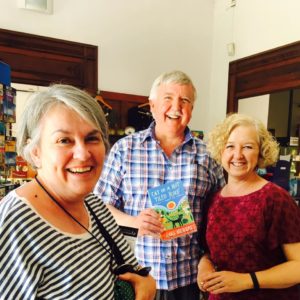 How would you describe this time of year in Mallorca?

Heavenly. My favourite months in Mallorca are from April until June and then October.

You come to Deià often. What do you think are the obvious, and subtle, differences between Deià and the Soller Valley?

I think Deià has an intimacy by dint of it being fairly isolated. There’s a rich artistic history to the village which still draws a quirky and interesting mix of artistic foreigners and the music scene is arguably the best on the island. Deià is utterly bewitching and beguiling.

Can you tell me about your fascination with the natural history of Mallorca?

I take a huge interest in the history, culture and traditions of Mallorca, particularly the Soller Valley. It is extraordinary how rich and varied the natural history is here. My third book focused on Myotragus, the little mouse-goat that was peculiar to Mallorca and Menorca and that became extinct 3000 years ago. It put Mallorca on the scientific map and is a complete phenomenon.

In researching the creature, I enjoyed a magical journey visiting professors at various European natural history museums and engaging with author Karolyn Shindler (now a close friend) who wrote the definite biography of Dorothea Bate, the British fossil hunter from the Natural History Museum in London who discovered Myotragus in 1909. The book was published in 2009 to mark this important centenary. I organised a conference involving international natural history experts and the regional government at the Royal Geographical Society in London, where I am a fellow. Turespaña kindly sponsored the event.

One last question, as Mallorca braces itself for record levels of tourism, there’s been some criticism of so-called ‘intellectual tourists’. What do you think of that?

It would be wrong to suggest that the majority of ‘thinking’ tourists yobbishly career through the countryside, ruining the natural fauna and flora. Most culture vultures are considerate and purely want to appreciate authentic Mallorca not rip it apart. They greatly help the local economy and that money goes towards maintaining this island and its infrastructure.

I agree, Anna. Thank you.

Anna’s Majorcan books are A Lizard in my Luggage, Cat on a Hot Tiled Roof, Goats from a Small Island, Donkeys on my Doorstep and A Bull on the Beach. All are available from the main newspaper shop in Deià, in Calabruixa and Café Paris in Soller and Es Turo restaurant in Fornalutx. You can also buy them from WH Smiths, Waterstones and all good online stores.

Her new book A Chorus of Cockerels will be published in the UK on 9 June 2016 and launched at Soller Natural History Museum on 17 June.

If you’re curious about what life is really like in the Soller Valley and want to be gently educated and entertained at the same time, I’d absolutely recommend you read Anna’s books.