On Sunday 26 June at 7PM, a performance of Gnaeus Robertulus Gravesa at the amphitheatre in Deià will mark the tenth anniversary of La Casa de Robert Graves opening to the public.

The Casa is maintained and managed by La Fundació Robert Graves, formed in 2003 and a non-profit based in the Balearics. Its fundamental purpose is to make Graves’s work better known in Spain. Among other things, the Foundation maintains and manages the permanent exhibition of Graves’s life and work at the house in Deià and promotes Mallorca through those aspects of his life and work most connected with the island and the village.

I spoke to William Graves, Robert’s son and the driving force behind the Foundation about the past ten years and his father’s legacy.

How well do you think the foundation has achieved its objectives, William?

My first great achievement was persuading the government to leave things as they were. I stopped them putting marble floors into the house.

The important thing is that the house is as perfect as it can be. It looks a lot better than when the family was there. The garden is much tidier. It’s more like it was in the 1930s, when it was just Robert and Laura Riding. Karl Gay, Robert’s secretary, used to say it was a ‘jewel box’ back then. When we children arrived it ceased being a jewel box.

On my mother’s death the house was acquired by the Foundation, which is funded by local government. We maintain the house with funds from local government, the town hall and what we make at the gate. Around 6,000 people come every year, which is almost enough There’s never quite sufficient money – at times we have to resort to ‘string and chewing gum’ – but it’s working well.

There are also 10,000 meters of olive groves which we’d like to open up to the public.

What sort of people come?

We get some wonderful people. A lot are interested in Robert’s work. Others discover him through the house. Many are simply absolutely fascinated with the garden.  In winter we supplement our income with visits from groups like ESRA and Spanish schools learning English.

What would you like to achieve for the future?

The house is very satisfactory. It could do with a few tweaks here and there but all we really need is a little more funding. We’re now at the stage where we’re setting up an association of friends of Robert Graves through which I hope we can obtain volunteers to help our two staff members when they get too many visitors at one time and least be able to pay for their petrol.

However, the Foundation’s aim is also to provide lectures, school talks, Graves studies, conferences, publications, and it will be helped by the new association. 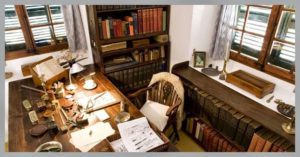 How do you explain the continued interest in your father’s work?

His sales go up and up all the time and, as his literary executor, I do everything I can to promote his name. One of the things I’m doing is transcribing his letters, which will be published online. I’m currently working on those relating to World War I, when he was already very much an establishment figure and one of the War Poets. Some of the letters relate to his saving his friend Siegfried Sassoon from a court-martial for writing an anti-war letter to the Times, and having him sent to Caiglockhart, a psychiatric home for officers near Edinburgh. Later Robert turned to love poetry, dedicated himself to the Muse, and removed all the war poetry from the canon.

I’ve over 9,000 letters of his located in about 50 libraries worldwide which I hope eventually to make available for study online. The letters relating to WWI are a pilot set.

Do you return to his writing?

I’ve reread just about everything and if there’s something I need to know about I return to the relevant book. I translated The White Goddess into Spanish, which is quite something. They say a translator gets to know a book better than the writer. One of the first things I did as Robert’s executor was to bring back his war poetry. Most of his work is in print. I am happy that Penguin have also republished the first 1929 edition of Goodbye to All That, alongside the tidied up 1957 edition.

Could you tell me a little about the celebration on Sunday?

One of the problems is that Robert’s writing is all in English. There’s very little in Catalan and I wanted to offer something so the locals could learn about him. Gnaeus Robertulus Gravesa is a play based on a short story by Robert written from the perspective of a Roman historian looking back over the life of a forgotten poet who lived before his time. The poet served in the 23rd Legion and the Royal Welch Fusiliers, in which Robert served, were the 23rd Regiment. Like Robert he was severely wounded. It’s a nice little tip of the hat.

The play has been created out of the text and there will also be a couple of dancers. It will last for about an hour. The performance starts at 7PM on Sunday 26 June and is free. The public amphitheatre, where it will take place, is a lovely setting in which to celebrate our achievement with La Casa de Robert Graves. Everyone is welcome.

Thank you, William. It sounds like the perfect way to begin a summer night in Deià.