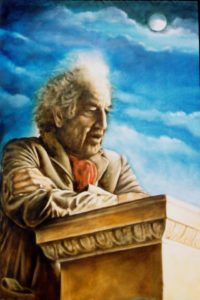 Monday 7 December was the 30th anniversary of the death of the poet Robert Graves whose life and work are inextricably linked with Deia. As fate would have it, I’ve been rereading Miranda Seymour’s Robert Graves: Life On The Edge (1995). This, in my opinion, the one book about Graves you should read if you have any interest in his life and relationship with Deia.

I remain fascinated by both Graves and Deia and by the perhaps unanswerable question of whether this is truly a special place or if the poetic power of his personality made it so. But first the facts.

How Graves arrived in Deia

Stay in Mallorca for longer than five minutes and you’ll probably hear someone say “It’s paradise, if you can stand it”.  This is how American expat writer Gertrude Stein described Mallorca to Graves and his then companion, the wonderfully peculiar and more than a little dangerous poet Laura Riding in 1929. Stein and Alice B Toklas (she of the famous brownies) had spent a few months in Mallorca in 1914.

Graves’s research revealed that the word “Baleares” is derived from the islands’ inhabitants prowess with slings. (There’s still a Mallorquin slingers association – the Federació Balear de Tir amb Fona – and it’s the only one in the world. Juan, Robert’s son, was a fully paid up member.) This, along with his discovery that Mallorca’s people were “descended from the Moors and the Romans as well as the Carthaginians” appealed to Graves. As did the more prosaic fact that Mallorca was still unmolested by tourism.

When Graves and Riding arrived in Palma in late October 1929, he thought the cathedral “looked like a golden fortress, an encouraging symbol of the isolation Graves was seeking”.  He and Riding knew they didn’t want to live with the expat British in Terreno, a suburb of Palma now less than a shadow of its former self.  On the advice of a German café artist they nicknamed “the suffering Christ” Graves and Riding visited Deia.

They arrived in the late afternoon and, as Seymour writes, “Watching the sun dye the soaring walls of the Teix mountain crimson before they blanched in the ashy glitter of the moon, Graves had a sense of being in the landscape to which he belonged…this…was a landscape made for legends.”

Graves and Riding decided to stay in Deia and, thanks to the remarkable success of  his autobiography Goodbye to All That, were able to start building a new house in Deia – Canellun. Apart from a period of enforced exile from the village caused by the Spanish Civil War, Deia was home to Graves for the rest of his life.

The physical fact of being in Deia influenced Graves’s worldview. But, especially for fanciful literary types like me, he fundamentally shaped how the village is viewed by the world. Here’s just one example.

Graves wrote extensively about Deia and energetically promoted its mythological aspect. This can be both illuminating and preposterous but always entertaining. Take the moon in Deia.

In an article Graves wrote about Deia called, harmlessly enough, A Place for a Holiday, he wrote “The Church is said to be built on the site of an Iberian shrine of the Moon-goddess and I am prepared to swear that nowhere in Europe is moonlight so strong as in Deia; one can even match colours by it. And moonlight is notorious for derangement of the wits.” (Quoted in a fascinating essay by Joan M. Fiol called The Telluric Factor in the Gestation of The White Goddess which is available online and well-worth reading in full.)

It was the exceptional quality of Deia’s moonlight that gave rise to the notion of Luna Land, not to mention a period Graves acknowledged was one of temporary madness. Luna Land was intended to be “an informal university” devoted to teaching Laura Riding’s bizarre, “apocalyptic” view of life. This was to be created on the sea side of the road below Canellun and was intended to prevent the supposed building of a hotel by some, possibly fictitious, Germans. 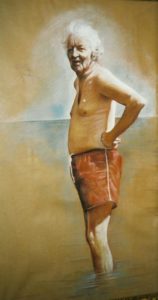 Graves may sometimes appear to have been off with the fairies but what he observes about Deia moonlight is, in my experience, true. The idea of Luna Land may be suitably lunatic but Deia moonlight truly is unlike that of anywhere else I’ve been in the world. It’s the light we see in dreams.

And have you ever noticed how many dogs in Deia are called “Luna”?

Graves’s personal mythology and how he lived his life fundamentally shaped the artistic culture of  Deia. (Here, I’m only talking about the artists and bohemians who have arrived in the village in the decades since the 1930s. I don’t know what the Mallorquin villagers thought and think.) Deia is a place where the feminine aspect of life is exceptionally powerful, where moonlight and madness – or, at the very least, strange behaviour – continue to go hand in hand.

For me, it’s impossible to think about Deia without remembering what Graves wrote about it. So, I don’t think I’ll ever resolve the question of whether the place is truly magical or if he made it that way. But I do know that those of us who love the village will be in his debt for as long as we live.

When I asked Tomás, Juan’s brother, for more information about the Mallorquin slinger’s association, he told me that, because it’s the only one in the world, “if you’re Balearic champion, you’re automatically world champion”.

Apparently, Juan was honoured at the Federació’s annual dinner in Inca this year and his wife Frances picked up an award given to him posthumously for his support of the sport. The Federació also announced they’d be organizing an annual Juan Graves Trophy for slingers in the Deia, Soller and Fornalutx area.

Both of the splendid images of Robert Graves are by Deia artist David Templeton. If you’d like to know more about his work, he’d love to hear from you.

Read The Telluric Factor in the Gestation of The White Goddess by Joan M. Fiol