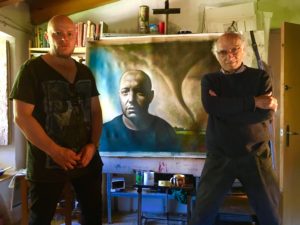 When highly respected Deià artist David Templeton’s latest show at La Belmond Residencia opens on 3 June, admirers of his work will have extra cause to celebrate. Two prints from the Hollywood Collection of world-renowned British artist Lincoln Townley are part of the show and a tribute to a remarkable friendship.

A triumph against all odds

Lincoln Townley’s work has been exhibited at major international galleries including the National Gallery and Royal Academy of Arts in London. His ICONS series of stars that include Johnny Depp and Jack Nicholson (himself a visitor to Deià) has earned him an international reputation. In 2015, he was chosen as Artist-in-Residence for the 2015 BAFTA LA Britannia Awards.

As anyone in the art world knows, succeeding in the way Lincoln has doesn’t come easy. And self-taught Lincoln has had to overcome obstacles few other artists face. Today, despite his global success, he still locks himself away in his garage to paint with ferocious energy for days. 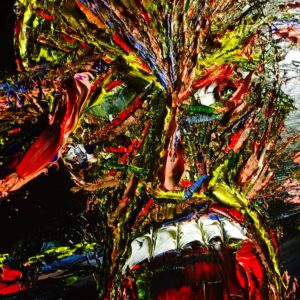 David had spoken about Lincoln and I was curious to find out more about their friendship came about. Lincoln was kind enough to have a chat.

First of all, how did you discover Deià, Lincoln?

I met my wife Denise five years ago. She talked about this place a lot: a bunch of creative minds in a crazy environment. We came here the first year we were together and I met David. It was quite an experience. I’d learned to paint as a kid but, weirdly enough, it was David who sparked the enthusiasm that got me back into painting. When I wrote my book The Hunger in 2011 I used painting as therapy.

How did you meet David?

Denise told me about him and showed me his work. I found him very inspiring and we really connected. I may well have bought one of his paintings that day.

Can you describe your friendship with David?

I kind of look on him as family. There’s a sort of brotherly love. We’ve got a very good spiritual connection. He’s really easy to be around and such an inspiration for me. There’s synergy. David has a more academic approach and is probably better at explaining my work than me. I always say he could curate me very well.

I’d say David’s my favourite artist. He’s painted me twice and really captured the essence of me. It’s an amazing honour for me to be showing my work with David in such a beautiful space.

What do you love most about Deià?

We come three or four times a year. It’s somewhere Denise and I can leave everything else behind. And there’s a mysterious side to the place, an energy here you don’t find anywhere else. I feel like I belong here. But, really, my feelings about the village are all wrapped up in my love of David. 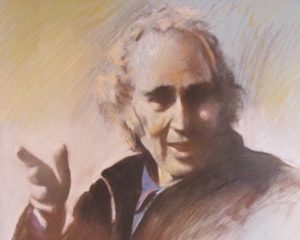 David himself was busy preparing for the show but I managed to get a taste of what he will be showing. ‘New lithographs and drawings,’ he said, ‘including preparatory sketches for a large painting of Juan.’ (Juan is Juan Graves, our much-loved and missed friend and David’s fellow Pa Amb oli Band member.)

And how would David describe Lincoln? ‘He’s a one-off phenomenon,’ David said.

So are you, David. So are you.