Alexander of Mashamba Garden and Terrace Design has been pondering sure fire ways to keep the free-ranging wild goats of Mallorca’s Tramuntana mountains out of the gorgeous gardens he designs for some time. I asked Alexander why goats had, ahem, got his goat.

Goats might fly – how your unwanted guest gets in

‘One of my gardens has recently become the favourite restaurant and haunt for the local goats,’ Alexander explained. It started with one intrepid individual, but it didn’t take long before all his mates quickly cottoned on to the fact that this was the place to be. They started using the pool area and dining terrace by the house as their preferred lodging on cold winter nights. How do we know this? Let’s just say that the smell was over-powering and they were definitely generous with the evidence that they left behind.’

How did the goats get in, I wondered? ‘The finca in question is surrounded by wild and rugged mountains: goat country,’ Alex told me. ‘The property is already enclosed by a 2-metre high barbed wire topped fence. This might seem like a formidable barrier but, to a hungry goat, it’s kid’s play – forgive the pun. Goats will start by finding the weak spots in a fence. Once these have been shored up, they start getting seriously creative.’

I like the idea of a creative goat. How so? ‘I’ve seen some veritable circus acts over the years. These include using vertical walls as run ups to cross stepped sections, biting through a wire fence, jumping sideways on through the gap between the main fence and the barbed wire. And, my favourite, using each other as a jumping platform to leapfrog over a fence. They may be a pest but they’re extremely determined creatures.’

What are the best ways to keep out goats, I wondered? ‘Trick number one is to not let them know what they’re missing out on in the first place. Once a goat knows there’s an abundance of good food and water somewhere, they’ll make more effort to get in and be far harder to keep out. The best way to thwart them is to walk the perimeter fence regularly and make sure it’s solid everywhere. All nearby trees, rocks, bushes, you name it, should also be removed as these will be used as tools to help them jump into your property.’

Are gates any use? ‘They are, but, believe it or not, I’ve seen goats open a gate. They’re also adept at climbing over them. Wherever possible, you should use Mallorquin style wooden gates with vertical beams not lateral. Any gaps between the final fence post and the wall should be reinforced because they try and barge their way through. In general, wherever walls or fences are stepped, you should maintain the highest level of fencing for further than you think would be necessary. Of course, there are more radical and violent measures you can take but let’s hope it doesn’t come to that.’

Let’s hope it doesn’t. Although they’re pests and carry nasty ticks, goats are part of the beauty of the Tramuntana mountains. Their tenacity is also kind of admirable. So, while it is possible to go on an organised goat-hunting excursion in Mallorca, I’m sure most gardeners would prefer to admire them from afar or, at least, outside the fence.

How Mallorca got goats

When you consider the way in which goats can invade gardens in the Tramuntana mountains, it’s fitting that their presence on the island is the result of what’s called a ‘bioinvasion’. Back in the mists of time, experts think the Neolithic period, goats were introduced to Mallorca by people settling on the island to provide milk, meat and skin.

(I wonder if Cabrera, the beautiful and strange island off the coast of Mallorca, is so-named because it was inhabited by goats. Can anyone tell me?)

Somewhere along the way, Mallorca’s goats – found only in the Tramuntana and Artà mountains – became free-ranging. They also interbred with the existing wild goat population. I was curious to find out if one of these was Mallorca’s most famous goat, the myotragus or mouse goat which died out 3000 years ago.

Soller valley-based author Anna Nicholas wrote a book about myotragus, aka the Balearic Cave Goat or Mallorca Mouse Goat, called Goats from a Small Island (2009). She tells me that the remains of the original Mallorca Mouse Goat are on display at London’s Natural History Museum, where there’s also an exhibit dedicated to English fossil hunter Dorothea Bate, who discovered myotragus’s remains in 1909. 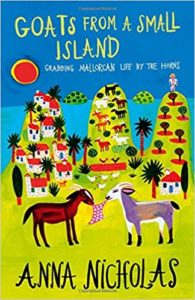 Anna doesn’t think the mouse goat interbred with domesticated goats as it was the only species of goat on the island at that time. The domestic goats were brought to Mallorca by man some time later.

So now you know.