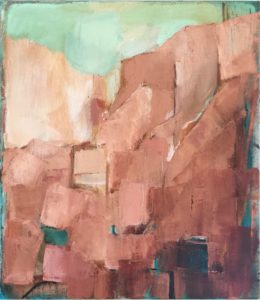 One of my favourite things about Deià is the way I’m constantly discovering new artists inspired by the village. It happened one afternoon in October when I called in to the Resi’s Sa Tafona art gallery to interview artist Mariana Alzamora.

I was struck by the work being taken down to make way for Mariana’s exhibition. Mariana introduced me to the artist, Carrie Jean Goldsmith, who was instantly friendly, charming and open. Her exhibition was called Love Letter. A few weeks later I interviewed her. 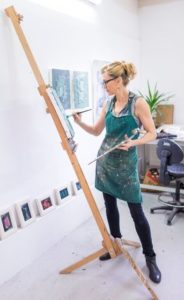 Could you tell me a little about yourself, Carrie?

I was born in Canada but moved to the UK in 1985. I arrived with a one-year open ticket intending to travel round Europe but the minute I got on my first Tube train decided I wasn’t going back. I worked in the music business for a few years before getting married to Hugh and starting a family. I’d always painted and created but, after my children began school, I began taking it much more seriously. About 15 years ago I became a ‘real’ artist.

How did you come to Deià?

For some time, we’d been dreaming of a place where we could escape the s*@t weather in the UK and finally decided on Mallorca. We arranged to go and check out some properties with Patrick at Charles Marlow. The brief to CM was to find us a small house with a pool as we needed to rent out the property to afford to do this.

Did you know about the village before you came?

We specified Deiá, Fornalutx and Sóller as we’d both been to Sóller and had heard that Fornalutx and Deiá were beautiful. Hugh had been to Deiá years before and remembered it being pretty special.

What were your first impressions of the village?

Like so many before us, we were utterly blown away by Deiá, not just because of its stunning setting but by the vibe, which we felt immediately. At the end of the first day of viewing we realised it was Deiá or bust and asked CM to cancel any viewings that weren’t in the village. It quickly dawned on us that we had to get our priorities right so the pool came off the list of must-haves and we found an amazing old house smack dab in the centre of the village with absolutely spectacular mountain views.

What do you love most about Deià?

I’m in love with Deiá and our little house. We have really good friends in the village and have met so many great and interesting people. The thing about here is that you can get stuck into the whole scene and feel inspired and motivated or just as easily escape everything. I love to just hang out, swim, walk, read, sketch and sit out at night to gaze at the silhouette of the mountains.

When we first arrived, I was astounded that the guys at CM seemed to know every house and who lived in it. I grew to understand that Deiá has a community spirit and it doesn’t take long to get to know the village and who lives where.

How often do you come and how long do you stay for?

We’re in the village as much as possible and I’m here on my own sometimes just to paint. We come and go throughout the year and don’t usually leave for more than a few weeks without returning. The longest we stayed away was when we had some renovations done at the villa by More Design who have a knack of turning site sketches into the most beautiful reality! It really feels like home now.

We stay for around a week most times of the year, apart from the summer when we’re in the village for pretty much the duration. The thing is, after about five weeks I always feel like I’ve just got into a groove and a way of life and then I have to leave! I think going forward we’ll spend longer and longer periods of time in Deiá as we can both work and welcome our kids and friends. Our kids are mad about the place as well and count the days between their visits. We’ve rented the house next to ours for a week next summer so they can all have friends to stay.

The summer is amazing but all times of year are special in Deiá. We love coming in January for the Festival de San Antoni and the early spring days are beautiful. Early autumn is probably my favourite because things have cooled down but the best thing is that the sea is still warm. I’m passionate about swimming and the island has some of the most beautiful coves I’ve ever seen. 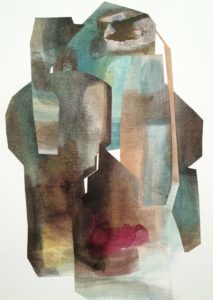 Has Deià influenced your work and, if so, how?

From the moment I arrived I was struck by the colour, climate and feel of the place. I knew instantly that I wanted to paint it and spent the first years sketching every day and getting to know my subject, bringing to life what and how I feel. I’m not trying to paint replicas of what I see but its essence, which is what I tried to do with my Love Letter exhibition. The name for the show came to mind instantly. It really was an outpouring of my love for Deià.

How do you feel about having had an exhibition at the Resi?

The exhibition at the Resi was a visualisation realised. With the help of the wonderful Cecilie Sheridan, it all came together. I sketched and painted whenever I was in the village to help with creating what I could see in my head and then did a lot of painting in my studio in the UK. It was such a positive experience.

What’s next for you and your work?

I’m currently working on some very small, almost postcard sized oil paintings. The plan is to frame them in a sort of box, similar to the collage pieces I did for the Love Letter show. I want to create little abstract studies that require close inspection. Having said that, I’m not limiting myself to any specific subject or scale, just seeing what unfolds.

I’m sure we’re all looking forward to seeing your new work, Carrie. Thank you and see you in Deià, I hope

If you’re in London and would like to see more of Carrie’s work, she’ll be exhibiting in November 2017 at the Menier Gallery near London Bridge. 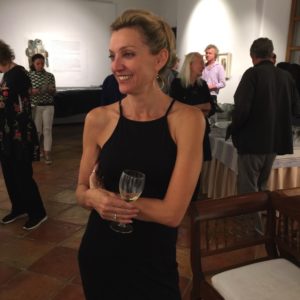