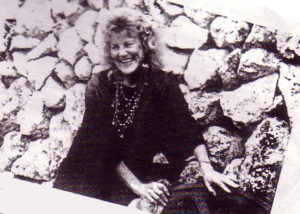 The story and mythology of Deià has always been shaped by larger than life characters. One of these was June Campbell Cramer, better known as Lady June, artist, poet, performer and the original electric landlady.

June was born in Doncaster, in the north of England, in 1931. She first came to Majorca (as it was called back then) in the late 1940s with her father, a fashion retailer. He introduced her to modelling and, when she moved to London in the 1950s, she worked as a model and studied art.

Returning to Majorca in the early 1960s, where she continued modelling, June met Daevid Allen and Kevin Ayers who were living in Deià. (June was responsible for introducing Daevid and Kevin to Wes Brunson, the American millionaire who sponsored Soft Machine at the beginning.) She soon moved to the village where she spent time with Robert Graves’s circle and began painting. June ‘Onion’, her alternative nickname, came from the fact that she would hang an onion as her signature over every piece she exhibited.

June transmogrified into a Lady when she moved back to London in the late 60s and became ‘landlady to many of the capital’s more creative musicians’. Daevid Allen described her apartment as ‘London’s premier smoking salon’. As a landlady, June also possessed a certain steeliness. ‘She was ferocious in the mornings until the first joint arrived: she’d hover over you with a wet cloth demanding that you clean the stove.’

By the 1970s, June was part of the English countercultural scene. In 1973 she recorded Lady June’s Linguistic Leprosy, an album of her poetry set to music by Kevin Ayers and Brian Eno. I’m listening to Linguistic Leprosy as I write this and it’s a thoroughly peculiar and oddly moving piece of work, a broadcast from different times. I can’t say I like it but I’m glad it exists.

When June moved back to Deià in 1975, she landed in her true home. ‘I think she found what she was looking for,’ Kevin Ayers said. ‘She had a longing to be an artist – at whatever cost – and discovered that in Deià.’ Despite suffering a minor stroke in the mid-90s, June carried on exhibiting her paintings and giving poetry performances. She released her second album Hit and Myth in 1996. In the months prior to her death of a heart attack on 7 June 1999, she had been working on an autobiographical record called Rebela with contributions from Gong members, Lol Coxhill, Cream lyricist Pete Brown and Kevin Ayers’s daughter Galen. She passed away on the eve of a joint exhibition at the Resi with Frances Baxter Graves. A week before, she’d remarked ‘This event is so well organised that it doesn’t matter if I drop dead’.

At the memorial for Lady June, her ashes were placed inside envelopes sellotaped to helium balloons that were then sent floating off into the sky. Perfect for someone, whose, ‘most achieved performance was herself: she succeeded in turning her existence into living art, bristling with humour’, as journalist and author Chris Salewicz put it in his obituary for The Independent.

According to her friend Carmen García-Gutierrez,, ‘June’s London doctor had told her she was likely to have a stroke and she made sure everyone knew. For the exhibition she’d bought a full-size skeleton kit and got the Deià kids to help her assemble it. It was going to be the centrepiece of her exhibition, riding a rusty bike-frame June had found in the village torrent.’

June was so hyped up by the preparation for the show she apparently said something like ‘Imagine if I drop dead in the middle of the exhibition in front of everybody!”

So, when people arrived at the Resi and asked where June was, only to be told she’d just died, they saw the skeleton on the bicycle and were convinced it was a joke. As Carmen says, ‘A week before she’d been putting up posters all over town, looking tanned and healthy in a short dress’.

Come eat with me – come, I’ll cook for you

I only met Lady June a couple of times so I’m conscious that I’m creating a story around a real person who touched the lives of my friends. I also don’t want to reduce her life to neat little anecdotes. This was very much bought home to me when I asked Frances what she remembered of June.

‘It threw me when it came time to write a Lady June anecdote,’ Frances wrote. ‘Everything surrounding her death was so devastating for me and all of us who dealt with it (and we all “dealt” with it). It’s been like a dark cloud hanging over her memory since it happened back in 1999. All I could think of to say was “Lady June, rest in peace”. But this morning, after lying awake thinking about hers and my relationship, which at times was difficult, I realised that that painful cloud has dissipated. I feel liberated and loving June again.’

‘The thing is,’ Frances continued, ‘I’ve kept her recipe book. Of all the millions of things she had, this turns out to be the one  that has survived these past 17 years with me. Amazingly, I’ve never looked inside, nor have I ever understood why I kept it, until this morning. Now, I see it represents the very best of Lady June to me. When I mused on it and perused it, all the best memories came back: her incredible love of giving parties, the great fun we used to have in her tiny but exquisitely organised and lovingly decorated flat, falling about the place laughing with friends all enjoying the same joke. What a generous, fun-loving person she was! How she encouraged all sorts of “happenings”, creative get-togethers in the village, connecting people through her generosity of spirit, made Christmas presents, paintings and beautifully detailed little postcards for people’s birthdays, for parents and kids alike. As I came across recipes for different avocado dips, certain curry dishes and other things, I actually remembered eating them and all the goings on that went with it. She’s compiled her recipes from here, there and everywhere. Some are cut out of newspapers, some from magazines, some hand-written, but it’s the real her, the Lady June I loved who is so there, present around the food she served to people.’

Frances finished with ‘She wrote poems, she painted pictures, she wrote songs, made CDs, did all of the incredibly versatile artist’s stuff. It’s all nourishment for people, but the Lady June that revolved around food, the “come and eat with me, come and I’ll cook for you” Lady June is the best version of them all for me.’

I think what Frances wrote is just beautiful. I certainly couldn’t improve on it.

Jerry Hart, one-time member of the Book of AM and Deià’s own Sex Beatles remembers June well.

‘It was 1978, a gloomy winter in Deià but a winter in wonderland for me. June wanted me to set one of her poems to music so I did. I knew her name and Linguistic Leprosy, which gave her a kind of aura.  She seemed old to my 17-year-old eyes and her grey perm, Marie-Antoinette pursed lips and steady stream of f-words were terrifying. She had a ground-floor flat opposite what is now the Resi from which she strutted in high-heeled boots to Sebastian’s for her morning tipple. Over this she’d curse the ‘bastard’ wood delivery guy who was deliberately depriving her of the flat’s only source of heat. She smoked copious amounts of cannabis – not to keep warm – and was suspicious of anyone who didn’t partake (she’d been busted in London). She worried about money, but would suddenly decide I was hungry and insist on cooking huge meals. The last time I spoke with her was by phone, over 15 years after we had last seen each other. She had always disparaged arty friends for not being “together” but she passed verdict that I’d now got it together and she was so pleased and proud of me. The song she wrote went:

Been wishing the world wasn’t really so bad

And that everyone in it,

The song’s final refrain changed “bad” to “glad” and “not sad”, so it all ended well. But it’s strange how memory works. I can clearly remember walking down the steps near the Estanco on my way to her flat one evening to work on that song. I’d been in the village a month. I remember thinking that one day I would remember this. I’m sorry she had to go.’

Finding out about The LadyJune was the original catalyst for this post. I was curious to know how and why the band got their name. Tomás Graves put me in touch with guitarist Guillermo Perez de Diego. He passed my questions on to singer and poet Toni Rigo, who told me the story.

‘During the 1980s I used to live at Ca’n Renou (“The House of Noise”) in Deià. Lady June was our next door neighbour. I knew her well. She was always dressed with a mini skirt and made-up, ready to go anywhere in the universe. We shared many cups of tea at her house. I remember her showing me Linguistic Leprosy and me trembling a little. There were so many great people on the album. When Guillermo and I decided to start a new band we thought it would be a good tribute to Lady June to name ourselves after her.’

Of Deià back then, Toni wrote ‘The figure of Robert Graves inspired creativity and a kind of protection. People like Lady June were very special, filled with creativity, fun and lust for life. There were times when one could go to a party every day and the Cala always seemed a Sanctuary to me.’

The LadyJune will be launching their second CD Historias para no Dormir at The Mar i Terra theatre in Santa Catalina, Palma on 3 June. On 25 June they’ll be playing at the Deià village fiestas. 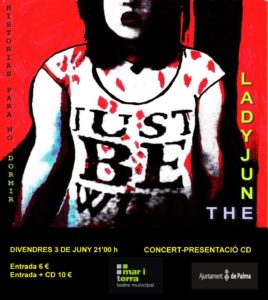 The last word – for now

For me, the story of Lady June is all about, as Chris Salewicz wrote, someone having the courage and drive to turn her existence into ‘living art’. And it’s no accident that Deià was the crucible for her project. As for the LadyJune band, they should be supported as yet another manifestation of the true artistic spirit of Deià, flowering simply because it has to.

I would like to let Frances have the last words: ‘So thanks David, all of this has meant a great deal for me. I know what I wrote is not an actual anecdote about her life, but it is an anecdote about her life after death. Almost 17 years later, the clock has turned back and that old feeling for my friend has returned. She’ll be giving parties in the dimension she’s now in, of this I have no doubt.’

An interview with Lady June

To whom it may concern