It started when I read this on a blog: “Graves was Orson Welles’ favourite poet. During Welles’ European exile, he visited Graves in Deià, and found it to be the most beautiful village in Mallorca, where time ‘was a shadow as in a dream that sleeps and wakening nothing is changed’.”

I was excited but not surprised to find out that Graves and Orson Welles had met. Graves had strong connections with Hollywood and counted stars like Ava Gardner among his friends. Welles first visited Spain as a teenager before WWII. He loved the country and regarded himself as an aficionado of all things Spanish. (In 1933, when Welles was 15 and living in Seville he even fought small bulls under the name “El Americano”. He was apparently not very good at it.) After the box office failure of his 1941 masterpiece Citizen Kane, Welles earned an unfair reputation as a spendthrift enfant terrible and, after the war, could for the most part only find work in Europe.

In 1964, Welles filmed a documentary series for Italian television called In the Land of Don Quixote in which he travelled around Spain with his family. It is easy to imagine Welles visiting Mallorca at that time. He filmed in Barcelona and, given the beauty and popularity of the Balearics, it would have made sense to come here. But we have no evidence to suggest that he did.

Graves was certainly an influence on Welles. In an interview with director Peter Bogdanovich (The Last Picture Show, Paper Moon) quoted in Orson Welles Remembered, Bogdanovich says that he believed Grave’s influence on Welles started in 1948 with his film of Macbeth, which is when The White Goddess was first published. From then on Welles shared Graves’s belief that the proper attitude towards women should be one of “total adoration”.

A sunny place for shady people

Welles certainly spent time on the island when he was making the documentary F for Fake (1974) about the art forger Elmyr de Hory and his biographer Clifford Irving, who also tuned out to be a forger. Together with another writer friend named Richard Suskind, Irving faked an “authorised” biography of Howard Hughes. According to one account, the fake biography was written in Palma. Irving’s crime was revealed while Welles was making the movie, helping turn it into a meditation on magic and fakery itself.

In a strange coincidence, Tomás Graves remembers seeing Welles at Palma airport “on September 11th 1973, the day of the coup d’etat in Chile, I was seeing off my girlfriend, and her aunt and uncle who were friends of Allende had just heard the news on the radio on the way there. We were in line at the check in and in the next line was Orson Welles checking in for a flight to Ibiza. Had I known he was a White Goddess enthusiast I might have introduced myself! But then again, I only recently discovered that Bob Dylan also carried a copy around with him.”

As to whether Welles met his father, Tomás says there’s no evidence that this ever happened. And he would probably know. So where did the blog writer get the idea that Welles had met Graves and visited Deià from?

I emailed the blog but got no reply. I asked Wellesnet.com, the online Welles resource centre, if they knew whether Welles had met Graves or visited Deià. They replied “We have dug through files and called associates. No one knows of a visit other than during F for Fake.”

It’s a minor mystery that Welles no doubt would have appreciated.

I can picture Orson Welles being driven from Palma to Deià, his filmmaker’s eye taking in the tilting sea, the jagged mountains and the church perched on the top of the puig. I can see him sitting with Graves on a shaded terrace, both of them big, charismatic men in love with magic and addicted to mythmaking. I can even imagine Welles deferring to Graves, the poet’s realness bringing out his own sense of being somewhat of a bulky imposter. I can hear them talking about the astonishing women they have loved. I can smell Welles’s cigar.

And, as the sun begins to set, turning the bowl in which the village sits the colour of blood in water, I can see Welles turning to Graves, starting to say something and thinking better of it.

Would I like to know if it really happened or not? I don’t know. Would you? 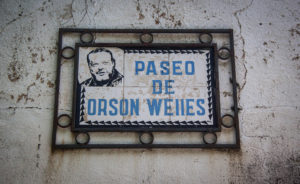 Picture of Orson Welles with bullfighters from www.sevilla.abc.es