Early on in my conversation with Galen Ayers, I mention that I’ve written about many of the oddly influential musicians who have lived and worked in Deia over the years. I reel off the names: Daevid Allen, Gilli Smyth, Lady June, Ollie Halsall, Joan Bibiloni. She laughs. ‘You’ve just listed all my babysitters,’ she says.

Galen Ayers has the classic child of Deià accent, sea-changing from slightly posh English to Mid-Atlantic and back to elegantly slurred London.

Like her father, the quietly legendary Kevin Ayers, Galen is a singer-songwriter. But her work is in a different vein to his. Or that’s the impression I get from listening to her wistfully sunny but deceptively tough debut album Monument. I’ve been listening to Monument steadily over the past few days and am realizing that there’s hidden depth to Galen’s lyrics.

Although several of the songs deal with Galen’s relationship with her father who passed on in 2013, her music doesn’t sound like his to my ears.

I’d agree with LA Weekly’s John Payne who headlined an interview with Galen by describing Monument as ‘comforting, challenging and mesmerizing’. Most of all, though, I’d concur with heavy duty music bible Mojo that ‘it’s her lyrics that fire the emotional circuitry’.

Galen Ayers spent many of her formative years in Deià. She spent time in the somewhat wild, bohemian Clot with her father, described in the bio on her website as a ‘psychedelic rock pioneer…whose experimental intellectualism, outsized charisma, and decades of substance abuse defined much of Galen’s early existence’.

Life with her mother Kristen and stepfather Axel Ball, a driving force behind the creation of Belmond La Residencia, the luxury and a little bit boho hotel in the centre of Deia, was very different.

Galen’s bio begins with the statement that ‘There is power in telling your story.’ This is some of her story, as told to me.

I began by asking what growing up in Deià was like for Galen. ‘I’m a weird intersection,’ she says. ‘Everyone in Deià’s connected by a quarter of a degree and a beer. My dad was Kevin but I was adopted by my stepdad Axel who took care of me with my mum Kirsten in Soller. They did La Residencia, which played a big part in creating what you see in the village now. By offering a space for all the Deià artists to exhibit, they helped give birth to the cultural scene. But I was also spending time with Kevin and that was very different. I was the daughter of the guy playing rock and roll down in The Clot and the guy who owned La Residencia. It felt sometimes like I was in the firing line.’

With music in her blood, it doesn’t seem surprising to me that Galen Ayers wound up as a musician. But her journey wasn’t quite as straightforward as I’d assumed.

‘The story goes,’ she tells me, ‘that I, like all the kids in Deià – imagine what you see now magnified hundreds and hundreds of times – had nothing to do in the afternoon while all the parents were sleeping off their hangovers. We would all get together, play music and sing. Apparently, I would take a little stool, go down to Gita’s place, get up on the stool and say, “Today I have a new song for you” and I would sing. All my poor, beautiful Deià babysitters had to put up with my Muppets obsession. They would have to sing with me to Kevin, who’d sit there with his vodka and lemon and listen to the fifth rendition of whatever. But then boys and spots happened, and I lost my confidence. I ended up going into my head, writing. When I was 16 or 17, I took a few tentative steps into the music industry, but I didn’t have the emotional state to deal with it. I didn’t really know what I had to say. It’s taken a long time, but Kevin’s death really put things into focus for me. Hence finally manifesting the solo album. Although I had been a band prior to that.’

What were her influences, apart from The Muppets? ‘Actually, if you look at the credits, The Muppets always had the best musicians. That’s why Kevin encouraged it. If you’re talking about influences that stood the test of time, it has to be The Beatles, Bob Marley, guy songwriters like JJ Cale, Clapton and Dire Straits, Paco de Lucia and The Gipsy Kings. There was also a lot of classical music and jazz, but not straight jazz. At boarding school in the 90s, I was influenced by The Cranberries, Radiohead, Fiona Apple and Regina Spektor. My biggest kick is lyrics, so Dylan of course. You get the picture?’

It’s hard not to picture her being pushed higher and higher by the spirit of her father, laughing but scared too, wondering how high she can go.

And Kevin, what about his influence? ‘It’s an interesting question. I recently found a letter from him sent to me when I was in my early 20s. He’s saying, “I’m happy that you do music, keep at it and progressing”. He was adamant that I shouldn’t be trained. He believed people should figure out music for themselves if they want any kind of chance at being original. In the letter, he also says that ever since I was a little girl, I’d had excellent pitch and a sense of melody. But then, in big letters, he writes “But if you think you can lead any type of a normal life and do this job, forget it. Think of something else to do.” Most of all, I’d say he influenced me more by osmosis.’

How do you feel about his influence now? ‘I’ve just come back from touring Japan and now I’m able to see him through the lens of a completely different culture. I always thought Kevin’s Britishness, the punning, would constrict his appeal. But here I am with hundreds of Japanese people who know all the puns. Because he was an advocate for being yourself, Kevin became the tool to allow his Japanese fans to be a lot riskier. He gave them permission to be themselves. As he did me. It made me understand him more. He was always in the moment. But he also worked so hard, especially for a guy who’s always portrayed as sitting on an island being lazy. I’m working on a book about Kevin for Faber Music and I’ve realized that his Warner Music catalogue alone is 280 songs. That’s 18 albums right there. The guy was not lazy.’ 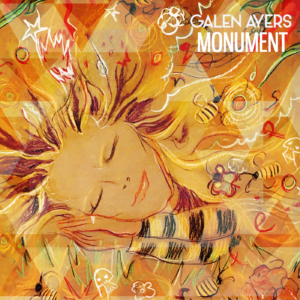 Listening to the lyrics to the songs on Monument, there seem to be several references to Kevin. The song ‘Monument’ itself would appear to be all about him. ‘Absolutely,’ Galen says. ‘It’s one of the reasons I called the album Monument. I wanted to transmute the grief I felt and make my dad most proud. Artists are all alchemists. I feel really good about what I’ve achieved with this album.’

A feeling in the air

Monument is Galen Ayers’s first album. Although her current project is writing  a book about her father, I’m guessing that there will be much more music to come.

I’m listening to Galen Ayers’s music on Spotify while I finish up this piece. Suddenly I’m hearing an utterly lovely version of Kevin’s ‘Girl on a Swing’, Galen’s high, pure voice blending effortlessly with a sample of her father’s warm baritone.

Without being too corny, I wonder whether Galen thinks of herself as the girl on that swing. It’s hard not to picture her being pushed higher and higher by the spirit of her father, laughing but scared too, wondering how high she can go.

But, as the deceptively slight lyric has it, ‘She’s not a victim of despair/She’s just a feeling in the air’.