They brought the spirit of punk to Mallorca, and stories of the havoc the Sex Beatles gleefully caused on the island and the Spanish mainland during their brief lifetime have become legend.

To give you a blast of what all the fuss was about before they appear at Deia 19, Hamish Macdonald, prime mover behind the Sex Beatles, tells the story of one of the most influential bands to ever come straight outta Deia. What follows is in Hamish’s own words, lightly edited by moi.

Elvis, Bowie and me

I was born 8 January 1955 in Dunfermline, the ancient capital town of Scotland, and share a birthday with Bowie and Elvis. Perhaps it was written in the stars that I’d go into music.

In my time, I’ve been the lead singer in four bands, a backing singer, bongo player, DJ, hit record producer, remixer, manager, agent, promoter and festival organiser. More recently, I’ve made and edited films and been a teacher, poet and seer. I write, I shoot, I ad lib.

In 1976 I was managing Daevid Allen and acting as his agent. He’d left Gong in 1975 and was living and recording in Deia.

I came to Deia to help persuade local musicians Joan Bibiloni and Pepe Milan to return to the UK and tour with Daevid. Joan played guitar and composed. Pepe played guitar, mandolin, banjo and slide guitar. The problem was they’d hated the weather and general atmosphere in the UK and weren’t keen on going back.

After being in the village for a while, I could see their point. Being in Deia also made me feel there was some sort of potential for change in my life. I left but came back to sing with Gong at Canet Roc festival in Barcelona, after a UK tour with Mother Gong. While rehearsing for this, I got bored playing other peoples’ music and began to learn the guitar, writing songs as I learned new chords, channeling the new sound and politic of punk, sick of the grossness and decadence of the capitalist ethic.

Armed with the pure creative power of punk and an awareness that Spain was a country reeling from the disease of fascism, I found a cause: to show Mallorcans there were alternatives, that the old ways were changing, and youth could benefit creatively.

The village was much more segregated then, especially locals and foreigners. But there was also a division of wealth that allowed for a not too subtle snobbery. Not surprisingly, there was a fair amount of suspicion and denunciation. The Guardia Civil wasn’t keen on foreigners like me outstaying their welcome – they weren’t keen on anything. Some parents in the village ordered their children not to get involved with foreigners.

Because the restrictions on speaking Mallorcan had been relaxed a little, the islanders were speaking their own language much more than Spanish. This made it even harder to connect. French was my medium. Many Mallorquins in the north spoke French, a hangover from the olive oil boom and the years spent exporting oranges to the south of France.

And then there were the foreigners themselves. The crazy ones and the self-obsessed, the cliques, the uptight, the decadent, the pirates, the uber-rich, the gypsies and the lost, the poets, artists and musicians inspired by mystical Deia. Only now money was pouring in; and the poor were getting rich while the mystical was slowly running on empty.

Still, there were plenty of parties, and live music. At times, the whole village came together for a party. For instance, to help pay the English poet and spoken word artist Lady June’s hospital bill or celebrate a full moon.

Between 1978 and 1982, I came and went. I would work for a month or two in the UK to make money – at the 1979 Glastonbury festival, for Better Badges who made button badges for bands including The Clash, B52’s, Specials, U2 and The Damned. I’d then come back to an island where, uniquely outside the UK, local youth were beginning to sport the same badges. Simply because, when we played in Mallorca, we normally ran a badge stall.

I began as an outsider but, after he hounded me down to talk ‘punk’, made friends with Jordi Rullan, later Jordi Ramone, now the drummer in Pa Amb Oli Band, and his wonderful parents Sebastian and Margarita who ran Las Palmeras in Deia. Jordi and his family helped me find my way in Mallorca. I even lived at Las Palmeras for a while.

After this, my life was spent sitting around writing songs on Jordi’s guitar in the bar or in a tiny casita up in the hills below Son Rullan.

The Offbeats (contra tiempo) came about when Jordi turned up one day with a poster advertising an anti-tourist concert in Palma. To grab attention, it had many famous names on it – Cream, Fugs, Doors, and Kinks. One band was Los Beatles de Palma, which may have inspired us to become the Sex Beatles later. Jordi wanted us to form a band to play at the concert.

Jordi said he’d play drums. His music teacher would play bass and I would sing. We press-ganged visiting hippy Gong fan, Jerry C. Hart into playing guitar. At the gig itself, the Deian poet Ronnie Wathen played uilleann pipes and bodhran while we blew the collective mind of Palma youth with a hardcore display of rock riffs, blood and scathing attacks on the ‘plastic industry of tourism’. The blood came from my slashing myself with a broken bottle I’d smashed mid-performance. The reaction was wild, the future was clear.

After this, The Offbeats played around the village at parties and in Palma at anarchistic political protest events. We were a band that villagers and foreigners alike embraced, or not in some cases. Our energy transcended the laidback existence of a very insular community. I remember the look of amazement on Mallorcan faces when they realized that this punk band that challenged the past and offered new, original songs was from Mallorca.

This didn’t come without problems. In 1978, we played our song ‘Franco esta muerte’ in Placa Major, Palma. The Guardia Civil, armed with submachine guns, strong-armed their way onto the stage, demanding an explanation for such a lyric. Tomás Graves, who was playing bass with us that day, told me not to say a word in English. He managed to convince them that the song was ‘a tribute to the Generalissimo’. 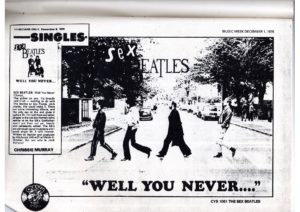 The Sex Beatles came about when we gained our Sollerens bass player, Pere Colom and manager Buda. As we talked about our many influences, among them the Sex Pistols and The Beatles, we mixed up our words. Voila! Sex Beatles.

When we realized there were venues available to play in and no-one was using them in that way, the Sex Beatles took off. We discovered La Defensora in Soller in early 1979 and did a deal with the cycle club that owned it. After dusting, sweeping and painting the place, we unfurled the old stage curtains and got the footlights working.

We reckoned that 500 people came the first night we played La Defensora, a huge crowd from Deia plus a new audience of Soller youth and like-minded musicians. It was the first of many successful evenings in Soller as we opened up venues like San Germain, El Patio and Bar Nadal for live music.

In fact, this meeting of minds, between Jordi, Jerry and me and Soller boys Pere and Buda, began the process of breaking down Deia’s insularity and allowing our two communities to form much closer relationships.

Looking back, the Sex Beatles/Offbeats were and are a band that made their own music on their own terms, standing up to the constant threat of fascism, tourism and the selfishness of wealth. We played rock music, experimental and challenging. We played reggae, funk and punk as it came. Whatever style came, along we tried. We were stylish in dress and brothers in arms.

We were also taken seriously. The lyrics for our song denouncing the military crackdown in Argentina, ‘Recuerda…’, were published in the Soller papers.

Hit the floor: the story of Al Suelo Coño

Politely translated, ‘Al Suelo Coño’ means ‘Hit the floor, dammit!’ But if you speak Spanish, you’ll know that coño actually means something rather filthier, which doesn’t stop it being a word children cheerfully fling at each other. I’ve even heard a newsreader call a weather forecaster coño when handing over to her.

We got the title for our song ‘Al Suelo Coño’, from the events of 23 February 1980.  I watched the whole event unravel on a TV in Bar Espana, Soller, where I was living. On the fifth anniversary of the death of Franco, a group of Civil Guards led by Colonel Tejero, stormed the Spanish parliament, initiating a military coup that lasted for 17 hours, until King Juan Carlos appeared on TV and affirmed his commitment to the Spanish constitution.

The song’s refrain was

Try and get funky with a lieutenant colonel

Try and get funky when there’s nothing on the radio

Try and get funky when the music’s over

Try and get funky when they say no

Although our song inspired by 23 February was a massive radio hit in Spain, it was banned by the right wing, disappeared off the airwaves and was never released on record. Written by me and Ollie Halsall, usually guitarist for Kevin Ayers, it was the Sex Beatles’ finest hour but led to us being harassed by the police and having to keep a low profile.

Leaving Deia and becoming a Godfather of Goth

I left the village because Jordi Ramone had been called up by the army and that meant a year without him. We tried another drummer but it was never the same.

Not being able to support myself, I went to the UK to initially sell badges but then also became the DJ at the legendary Batcave club in London, considered to be the birthplace of the Goth subcult. I’m now hailed as a ‘Godfather of Goth’. I also formed the band Sexbeat, whose anthem, ‘Sexbeat’ is a Goth classic.

I’ve also been a DJ at many London venues and clubs such as Dingwalls, Camden Palace, Embassy Club, The Lyceum, Hammersmith Palais, Hammersmith Odeon and Heaven.

Today, I’m currently working with the great Spanish musician, Ramón Farrán, and his daughter, Natalia Graves Farrán. I am also working with Bob Geldof, who spends part of the year in Deia, shooting and editing film footage of his band, the Boomtown Rats, as well as some key personal events.

I go back to Deia at least once every year and remain especially close to Pere and Jordi.

As far as Deia 19, the festival, is concerned, I hope it presents a true picture of the village’s artistic community and doesn’t distort the storyline. Other than that, the festival is a platform to continue the creative mining that the mystical atmosphere of the sea, mountains, people and topography of the village encourages, inspires and informs. If handled respectfully, it’s a way of keeping something ‘sacred’ going; a quality of reflection and intuition that revealed itself to a great poet and was shared among those who followed his path.

We’ll play the sound of the Sex Beatles and the music of the Offbeats, the words of of a poet, songs of decadence, the rhetoric of martyrs and the call of the wild.

Hamish et al will bring the Sex Beatles/Offbeats back to life at 8pm on Friday 11 October. Like the Festival Facebook page and you’ll know as much as I do.