I first became intrigued by Alston Anderson and his connection to Robert Graves when I read Simon Gough’s The White Goddess: An Encounter.

Picture a sweltering summer afternoon in Deia in 1953. A fascinated, dusty Simon and Juan Graves – looking like two boys from a Mediterranean Just William story – peer at Alston, “A tall, thin negro, beautifully dressed in a tropical suit, dark glasses, and a wide-brimmed hat”. Alston has a formal invitation to tea with Simon’s fragrant actress mother Diana, Robert’s niece, at Canellun.

Juan nudges Simon in the ribs and hisses “It’s Alston. He’s a poet!”

Alston and Life On The Edge

In Robert Graves: Life On The Edge, Miranda Seymour describes Alston as “a young Jamaican writer educated in America and France for whose one book, Lover Man, Graves wrote the introduction.”

Alston was part of Graves’s Deia inner circle and wrote a skit on Samuel Beckett for Robert’s annual birthday celebration performance in 1957. But, in 1962, Alston was told off by Graves for writing to Beryl using “explicit sexual language”. Graves then writes “I’m afraid you’ve got to the point of no return in your drinking and doping. It’s bad for work too.”

Seymour goes on to say that Anderson, a heavy drinker, was dead within two years. Which isn’t true. But we’ll get to that.

How lucky we are! A black man!

I got my hands on Alston’s Lover Man (1959) and a 1965 collection of “Powerful, dazzling fiction” called Come Out The Wilderness in which his short story Dance Of The Infidels is anthologised. He’s in hip company, alongside African-American writers James Baldwin, Richard Wright and Langston Hughes. The introduction to Lover Man was written by Graves. It begins

I don’t remember exactly when Alston Anderson first visited our village – some six years ago – or why he came, but anyhow, there he stood with his nervous smile, tall, spare body and soft voice: the first negro to settle among us, and brown to the bone. After the first shock of novelty, the villagers’ reaction was ‘How lucky we are! A black man!’ In Majorca negroes bring luck.

I’d love to know if what Graves says about Mallorquins and black people was actually true. Anyway, he goes onto say that Alston was born in Panama to Jamaican parents and educated in Jamaica before moving to the US aged fourteen.

During WWII, Alston served in the US army and worked his way up to master sergeant. He was demobbed in 1946, took advantage of the GI Bill of Rights and studied at North Carolina College, Columbia in New York and finally the Sorbonne, where he specialised in German eighteenth-century metaphysics.

As Graves puts it, “When Alston plays the drums or dances on our terrace, you can judge what a misfit he must have been in his Faculty at the Sorbonne.”

For Americans with artistic aspirations, postwar Paris was paradise. The City of Lights was also legendarily respectful of black artists. Adding to the sense of freedom, as Alston no doubt discovered, was the fact that no-one checked whether the ex-GIs actually went to classes. Instead, he hung out with compatriots taking the general literature course, read Joyce, Dostoevsky, Kafka, Faulkner and, in 1950, began to write fiction himself. In Paris, Alston may well have known Beckett.

It was when he was on the fourteenth draft of his first novel, in his late twenties, that Alston came to Deia.

Why did Alston come to Deia?

The GI Bill made it possible for literary Americans to follow in the footsteps of Lost Generation heroes like Fitzgerald, Hemingway and Henry Miller and explore Europe. Mallorca was ridiculously cheap, beautiful and remote enough for a certain kind of laissez-faire to prevail, even under Franco.

Graves’s The White Goddess was published in the US in 1948 and quickly celebrated as a profound statement of what it means to be a tortured romantic poet. It’s not hard to imagine literary Americans wanting to make a pilgrimage to Deia to sit at Graves’s feet. Was Alston one of them?

Whatever the reasons, Americans began arriving here. The Canadian writer Mordecai Richler, best known for his 1959 book The Apprenticeship of Duddy Kravitz, took a house. Alston knew Mordecai from Paris and this could have been how he heard about the village. 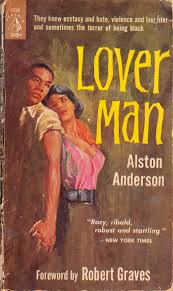 Alston came and went from Deia to Paris and New York throughout the 1950s. In 1955, with his friend Terry Southern, he interviewed the writer Nelson Algren (Walk On The Wild Side, The Man With the Golden Arm) in Greenwich Village for the Paris Review. Terry had great respect for Alston’s literary abilities, asking for feedback on early drafts of his short stories Red Dirt Marijuana and Razor Fight, as well as the novel Flash and Filigree.

Alston was certainly a serious writer. After a stint at the Yaddo writers’ colony in Saratoga Springs, NY, he told Graves

to avoid finding a job…[I had] adventures with the New York waterfront, juice-heads, hop-heads, et cetera. I changed addresses six times in 1955, and nearly froze to death that winter. New Year brought me a break. I actually met someone who professed faith in my work and said he’d stake me while I wrote!

(I wonder if Alston’s mysterious benefactor was actually Graves himself.)

Lover Man is well worth seeking out. It’s a book of the American, black south. But, although it’s written partly in authentic-sounding dialect, it has a certain detachment that comes from Alston not being Afro-American by birth. This could also be the reason that, as Graves says in his introduction, “only a negro can describe negro life, and you are the only one who does just that without writing down to us whites”.

In 1965, Alston wrote a novel called All God’s Children (1965) which apparently includes material about his time in Mallorca and later Denmark. I’ve yet to get my hands on it.

As far as I can discover, that was that for Alston the writer. He was good enough to be admired by his fellow members of the Shakespeare Squadron. But, perhaps because of the “drinking and doping” Graves referred to in his letter of 1962, wasn’t able to parlay this into a comfortable career as a writer, critic or professor of literature.

Alston actually died in New York in 2008, aged 84. No-one claimed his remains and he was buried in the potter’s field at Hart Island, New York. In 2011, he was reburied in a silver coffin, courtesy of a programme that tracks down the remains of indigent US veterans and gives them “proper military burials”.

I don’t know if Alston’s life was tragic after he left Deia, whether his addictions got the better of him. I hope he got straight and lived a perfectly good life under the literary radar. I would love to read his impressions of Deia, of his friendship with Graves, if these exist.

For now, I’m content to picture Alston strolling through Deia, tipping his hat to a bulky matron, on his way to while away the hours in some cool bar. Or playing wild drums under a full moon.

Researching this post, I interviewed Nile Southern, Terry’s son. He’s very keen to track down any letters his father may have written to Alston. As Nile put it “Good luck in Deya on the ALSTON ANDERSON hunt—I’m telling you Terry’s letters to him could be holy grail material! We have Alston’s side of the correspondence… Great stuff.”

If you know anything about what happened to Alston after he left Deia or the whereabouts of the letters to him from Terry Southern, I’d love to hear from you.