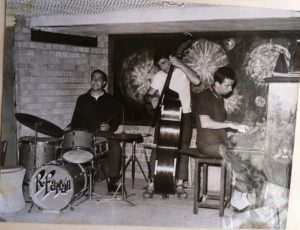 Today the area known as El Terreno in Palma is a ghost town. It’s hard to believe that, back in the 1960s, this scruffy, disheartened barrio was home to countless bars and clubs that to some of us are legendary. One of these was the Indigo Jazz Club at 7-9 Calle Corb Marí, founded by jazz drummer Ramón Farrán.

Birth of the Indigo

Ramón Farrán arrived in Mallorca in 1956 to spend the summer playing at the Formentor Hotel with his great friend, pianist Tete Montoliu. A chance encounter with Robert Graves in Deià led to an extraordinary friendship and collaboration. In the early 1960s, when Ramón decided to open the first jazz club on the island, the poet helped turn dream into reality.

Ramón had applied for a permit to start the club, which was ready to open its doors, but the paperwork was taking forever. When Graves asked Ramón how things were going, Ramón explained that, although everything was in order, he was still waiting for the permit. Ramón tells me that Robert demanded ‘Take me to Palma!’

They set off immediately, Robert still in his ancient espadrilles.

When the two men were granted an audience with the authorities, Robert explained in a mixture of English, Spanish and gesticulation that opening the Indigo would be a huge boon to Mallorquin tourism. The club received its permit the following Friday and opened soon after. Always supportive of anyone trying something new, Robert even posed behind a drum kit at the Indigo to help promote the venue.

The Indigo would go on to play host to an astonishing array of jazz and rock and roll legends, thanks in part to another highly unlikely friendship. 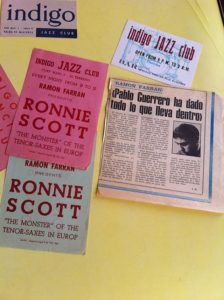 A couple of years later, in the winter of 1959, just weeks after Ronnie had just opened his eponymous club at its first address – 39 Gerrard Street, Soho – Ramón knocked on the door and asked to play. As he says, ‘I was young and fearless. I had nothing to lose.’

Ramón played at the club and went on to become good friends with Ronnie. He performed at Ronnie Scott’s many times but couldn’t, however, be billed on the programme because he was Spanish and not allowed to join the UK Musician’s Union. So, he was paid in cash every night.

It was Ronnie who brokered the deal with the Musicians Union that made it possible for American jazz musicians to play in the UK, in exchange for British musicians being invited to play in the States. This gave a huge boost to jazz in the UK and to the reputation of British jazzers abroad.

As a result of Ronnie’s negotiating skills, Ramón got to share the Ronnie Scott’s stage with many legends. These included Miles Davis, who would give you the ‘fish eye’ if he didn’t approve of your playing. ‘Thankfully I passed the Miles test,’ Ramón says, laughing, ‘and didn’t have to get off the stage’.

I’ve always been intrigued by the fact that Ronnie, the Jewish East End jazzer, was great friends with the patrician poet Robert Graves. Robert is the last person I would have ever pegged for a jazz fan but he was. With Ramón’s help, I’ve managed to stitch together the story of how it all came about.

Shortly after the Indigo opened, Ramón was busy talking to customers. A man sitting in a corner, covering his face with a hat, asked ‘Can I sit in with you in the next set?’ Ramón asked the man if he was a professional musician. ‘Yes, the name’s Ronnie Scott,’ the man said, taking off his hat. Big hugs and much laughter followed. Ramón had, of course, mentioned to Ronnie that he was starting the Indigo.

Ronnie played at the Indigo every August for a few years’ running and attracted big crowds.

One night, after they’d performed at the Indigo, Ramón and Ronnie played together at Ca N’Alluny, Robert’s home in Deià. Robert invited Ronnie to stay a couple of days.

‘What’s the pot situation like in London now?’ Robert asked Ronnie, and this broke the ice.

Ronnie visited Deià on a couple of other occasions. The two men were fascinated by each other. According to the writer of the Jazz Profiles blog, Ronnie was ‘astonished by the old man’s boundless energy, springing up the steep slope from the sea to the house like a gazelle.’

The Jazz Profiles writer credits the Indigo with reminding Ronnie that running a jazz club could be fun, which led to him opening the second and permanent Ronnie Scott’s in 1962 at 47 Frith Street, Soho. In return, as Ramón explains, ‘Ronnie would suggest musicians for the Indigo. He’d call and say “So and so is going to be at my club in September. Would you like them to come to the Indigo afterwards?” This is how stars like Swedish trombonist Eje Thelin, British tenor sax player Tubby Hayes, Dick Morrissey and Joe Henderson came to play at the Indigo.’

Ramón tells me that ‘The English bebop players were a little different to American jazzers of the period, possibly a little more technical when improvising.’ It must have been amazing to see them play up close.

When you dig deeper into the life of Robert Graves, strange connections manifest themselves. Reading Marcus O’Dair’s excellent biography of Robert Wyatt, Different Every Time, I’d been intrigued to discover that Graves was a fan of avant-garde jazz. How did a classical scholar come to embrace the out there music made by free jazz pioneers like Cecil Taylor, I wondered.

Ramón is the key.

In 1964 or ’65, Robert was invited to New York to give a groundbreaking talk in which he spoke about the effect of magic mushrooms and how drugs influenced religious imagery. Before he went, Ramón, who had turned him onto jazz, insisted he visit a couple of clubs.

‘Who should I see?’ Robert asked.

Ramón recommended Cecil Taylor and the astonishing pianist, composer and songwriter John Benson Brookes among others and gave Robert the names of some jazz clubs. Robert duly sought them out. He went on to become Cecil’s patron. Cecil, who is 87, is also a poet and cites Robert as one of his influences.

A poem by Robert features on Benson Brookes’s 1968 Avant Slant album, a brave but disorientating musical and spoken voice collage.

From New York, Robert brought Ramón back two hi-hat cymbals, a bass drum pedal and a couple of signed books by American musicians, including one by Benson Brookes. Maybe this was his way of thanking Ramón for introducing him to the world of jazz. 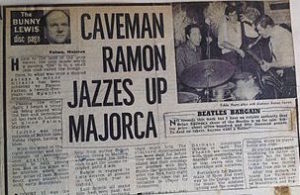 Rock and roll legends at the Indigo

Apart from the jazzers, the burgeoning rock and roll counterculture was also represented at the Indigo. Robert Wyatt, Soft Machine drummer and later a much-loved solo artist, played the club. Eric Burdon and other members of The Animals came along and jammed. Jimi Hendrix was in the audience a few times.

Hendrix had just finished an horrendous tour of the USA, supported by the Soft Machine, and had become great friends with Robert Wyatt, who’d been taught the drums by Ramón in Deià. Robert had offered to pay for his lessons by working the door at the Indigo.

Hendrix was supposed to be in Mallorca to play the Música 68 festival, which I always thought had been cancelled after the promoters pulled out. But Esan Khoshbakt’s Notes of Jazz blog claims that the festival did go ahead and Ronnie Scott’s big band, featuring Tubby Hayes and John McLaughlin played.

Ramón confirms that the festival did happen. But without Hendrix and most of the big name acts like The Byrds, Count Basie and The Incredible String Band who had been slated to play. ‘It was chaotic,’ he says, ‘a disaster’.

Unlike the Indigo. Speaking of his baby, Ramón says, ‘It was such a cool club, with a really great vibe!’ I’d say it was also a beautiful example of the serendipity or simple twists of fate that anyone who knows Deià comes to expect.

Should you happen to be strolling through the empty streets of El Terreno of an evening and hear the faint sound of jazz borne on the dusty breeze, follow it. Because who knows where you’ll end up. And if you track the music down to its source, tell them Ramón, Robert and Ronnie sent you.

The story of Ramón’s life in jazz

Robert Wyatt on Graves and jazz