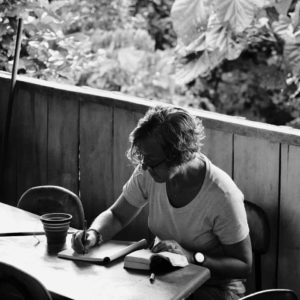 I’ve just finished reading my friend Anna Nicholas’s new Mallorca-set novel The Devil’s Horn. I read most of it in a single long train journey. Halfway through I couldn’t stop myself from emailing her and asking if the Devil’s Horn caves that give the book its title were real.

The Devil’s Horn is Anna’s first novel. It displays the same in-depth knowledge of Mallorca and love for the island that have made Anna’s six previous non-fiction books about la isla de la calma so popular. So much so that, although I’d never heard of it, I was sure the village of San Martí in the Soller valley, where the story is mainly set, was also real. (It may be: a Mallorcan Brigadoon, if you will.)

Most writing about the island uses an aspect of Mallorca as its setting and ignores everything else that doesn’t fit with the image it’s trying to portray.

In stark contrast, Anna has expertly fashioned a suitably twisting, turning plot for The Devil’s Horn that moves from rural Mallorca to Magaluf and Palma’s very real cocaine and crime-infested sink barrio, to coin a phrase. There’s something highly appealing about this contrast between her somewhat old-fashioned but not anachronistic style and the grittiness of the world of the novel.

Anna was kind enough to take time away from her busy schedule to answer my questions about The Devil’s Horn.

What was the spark for The Devil’s Horn?

There are several strong and feisty Mallorcan women in the Soller valley managing holiday property rentals for foreign clients. So, a few years ago I dreamt up Isabel, a quirky, eccentric and strong-willed former detective, now running a rentals agency with her mother. Her peaceful existence in a small rural community is turned upside down when she’s called upon by the national police to help solve some puzzling island crimes. The story took form from there and soon I envisaged a gentle crime series featuring her mountain community, vibrant characters and a realistic setting, as clearly as a cloudless sky.

I like the fact that your heroine is Spanish. Why did you make that choice?

I felt it important to have a Mallorcan protagonist solving crime on the island. The book, similar to my travel series, draws from local culture and traditions and is all about a sense of place, so I needed that authenticity. I wanted to create a larger than life, obstinate, brilliant, fearless and sometimes exasperating, yet loveable, local woman. Isabel is a minor rebel, breaks the rules in a harmless way, drinks good wine, eats cake and doesn’t worry about the consequences. She is a positive, fun and life affirming character.

Did you have to do much research to create a believable female Spanish character?

Without sounding too like a luvvie, I feel that I have always known Isabel or rather ‘Bel’. For nearly two decades, I have observed Mallorcan women friends and how they tick. I adore them, their joie de vivre, good hearts and ability to be tough when needed. When the chips are down, they’re not frightened to plunge headfirst into the storm.

I’m interested by your emphasis on ‘balanced’ and ‘happy’ as applied to Isabel. Why do you stress this?

These days, many crime heroines are damaged goods. Several have predictable fractured pasts, all created to reflect their vulnerability – such as alcohol dependency, jilted by a husband or lover, lover murdered, overweight and frumpy, reformed drug addict, depressive etc. I find that quite contrived and thought it was time to redress the balance. Isabel’s life has its cracks and minor earthquakes, but she is, in the main, a happy and balanced individual. Of course, she’s vulnerable too like all of us humans but I didn’t feel that I needed to create a dark former life for her.

The pace of The Devil’s Horn feels very Mallorcan. How deliberate was that?

I’m glad you picked up on that. Naturally I wanted to create a quite racy storyline with lots of pace but at the same time I wanted to offer a sense of the island’s languid character which is thankfully more slow than fast food. I hope that I manage to balance tense moments with a more laid-back Mallorcan spirit and flow.

As intelligent as it is entertaining – The Telegraph

Is writing all about sticking at it for you or do you also read ‘how to’ books, go on writers’ retreats and so on?

I studied English Literature, Ancient Greek and Latin at university to I have been a bookworm all my life. I think reading great works is the way to appreciate the written word, its nuances and beauty. I have never read a ‘how to’ book in my life. I’d rather make mistakes and learn from them as well as taking heed of fine writers but we’re all different and many might really appreciate this kind of steer.

I think writers’ retreats are a fantastic idea and one can really gain inspiration from being part of a likeminded, creative group and having experts to guide you. The only residential course I ever attended was aged 16. I stubbornly travelled on my own from London to Devon by train and bus for an Arvon Foundation week staying in Ted Hughes’ former home. The others were mostly established playwrights, authors, and radio play specialists and they were rather taken aback that a teenager would show up! They were fantastic and so encouraging. The course leader liked my work – I had written a children’s book at ten and had a TV series concept  – and told me to pursue a writing career. The whole experience was genuinely life changing, probably too because of my young and impressionable years.

What’s the best piece of advice anyone’s ever given you about writing?

Two things. Never to use the excuse of needing an elusive muse to get  writing. That’s just a cop out! And the second piece of advice was from my friend Norris McWhirter, CBE, founder of The Guinness Book of Records. He said that whatever happened, and despite setbacks, one should simply never, ever, ever give up.

What’s your advice for would-be writers?

The world of publishing has changed so much, mainly due to the arrival of Amazon and the e-book phenomenon. There is a huge choice of books available and a lot of competition because there are simply so many authors and would-be authors out there. So, one has to be serious about writing, truly committed and not afraid to be rejected time and time again by literary agents or publishers. If it’s impossible to find a willing agent, many go down the self-publishing route (what used to be called vanity publishing in the old days, although there are differences). However, much as some make a real success of this, it can be a tough and expensive route to take for the inexperienced, and masses of research is needed to understand how to produce, market, distribute and ultimately sell your book.

With the rise in self published authors, and traditionally published authors opting to take back control and to self publish, there are now hybrid or collaborative ‘publisher’s aplenty. Many promise to assist you with all aspects of book production and often flatter a rejected author, saying that their work is good enough to be published. Some of these operations are sharks and take authors for a ride charging ludicrous amounts of money to print their book. So beware and don’t let ego drive you. Real traditional publishers will never ask for money. They will produce your book on merit and either pay you an advance (though not many of those now) and royalties on sales. If you choose to use a hybrid, and there are good and genuine ones, do your homework thoroughly.

The Devil’s Horn is self-published. Why did you go down that route?

I have been traditionally published for a decade and my imprint was part of Hachette but last year I finally decided to wrestle my rights back. It had been in my thoughts for a while as I had an established audience and hated not being in the driving seat. I decided not to self-publish as such but to go hook, line and sinker and establish my own small indie publishing company, Burro Books.  I am using it as a vehicle for my own eight titles but once I get under the skin of the industry, and boy has it been a steep learning curve, I hope that I’ll be able to produce the works of others. The website is here and it has just gone live. Soon it will have a sales element too.

In addition to creating my own website I have been taken on by the UK’s largest distributor, also the main distributor of the Baleares and I am lucky that a major foreign rights agency has recently signed me up in London. I have the same editorial team and illustrator and one of the best and largest printers in the UK. It’s an investment but quality matters and I’m a perfectionist. I ran my own PR company in Mayfair for years so thankfully I have that element more or less covered with additional help from book marketing specialists.

Who are the writers you love that may have influenced you and what are you reading at the moment?

A few of my favourite writers include DH Lawrence, Thomas Hardy, E M Forster, Shirley Jackson, D E Stevenson, Andrea Camilleri and Margaret Atwood (though I’m yet to read The Testaments; by my bed). I love one-off beauties such as the truly life-changing, The Story of San Michele by Axel Munthe. Don’t get me started on poetry….

Do you think you would have become a writer and stuck at it anywhere in the world or did Mallorca play a part?

I have been a freelance journalist for many years, writing alongside my day-to-day work as MD of a London PR agency. I wrote poetry and three books when younger but never did anything with them. The time had to be right and arriving in Mallorca was it. It gave me the inspiration and space to develop my writing career. Of course, if I’d gone elsewhere, who can say, and it’s likely that I would have found other subject matter, but I’d be hard pressed to think of a better or more fulfilling and idyllic place to be an author.

If you’re in Mallorca, pick up a copy of The Devil’s Horn at:

It’s also available at many news kiosks across the island.