American author Luke Rhinehart was inspired to finish his great cult novel ‘The Dice Man’ in Deià. In this blog post he talks about life and writing and shares his view of the, ahem, interesting times in which we live. 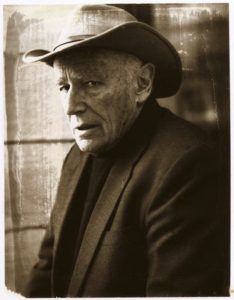 I’ve never met or even spoken to American author Luke Rhinehart, also known as George Cockcroft. So, over the past few weeks of exchanging emails about his time in Deià and his great new book Invasion, I couldn’t quite shake the feeling I might be corresponding with a furry beach ball or a gang of mad-eyed geeks rolling a dice to decide how to answer my questions.

Luke has a fluid attitude to what personality might be. ‘We have many actors inside us. These must be permitted to play,’ he once said. He also faked his death, sending out a Death Letter to various friends and acquaintances. But since I haven’t seen any recent reports of Luke’s death and his emails to me crackle with electric vitality, I would like to assume I’ve been talking to the real Luke. Or George.

But even if I haven’t been, does it matter?

The bio on Luke’s website describes him as ‘the sporadically acclaimed author of eight works of fiction, most notably of a book written centuries ago entitled The Dice Man…Luke lives sneakily in an old farmhouse in the Berkshires in upstate New York where neighbors know him as the crazy old man George Cockcroft.’

Although I try to address George as George in my emails I do feel more comfortable calling him Luke. Make of that what you will, as Luke or George would say.

Luke’s website also includes a piece of writing called ‘Our Autobiographies’ which is his attempt at beginning to write about his own life. The problem is that, as Luke admits, ‘the simple fact is that I’m not at all interested in the details of my own life and don’t think other people should be either’.

(I can’t decide if I’m interested in the details of Luke’s life or not, to be honest. But his worldview, if that doesn’t sound too pretentious, fascinates me.)

Another problem with writing an autobiography for Luke was that ‘every time I used the word “I”, “I” was lying. We knew that we had no single self or “I”, neither now nor ever, and that pretending that we did meant we were missing the essence of what it means to be a human being.’

Should you decide you’d like to read the beginning of Luke’s autobiography, you can do so here.

The Dice Man, published in 1971, was mostly written when Luke was living in Deià. The BBC called the book ‘one of the fifty most influential books of the last half of the twentieth century’. More recently, the Toronto Star named it as ‘one of the twenty great novels not yet made into a film’.

Incidentally, Luke dared me to print this: ‘In 2004 my wife and I returned to Deià. In early May it was so packed with tourists we couldn’t find a parking place, couldn’t recognize or find the bar-restaurant where The Dice Man was discovered, returned to find a parking ticket, and just outside the village spent five minutes away from the car to admire the view only to return and find our car had been broken into and both our wallets stolen. Ahh, the eternal magic of a special place.’

The great achievement of The Dice Man, apart of course from the actual writing, is that it challenges a reader to do something to change their own life. I’m sure that everyone who reads the book starts trying to remember if they have any dice in the house. Many of us went further and experimented with ‘dice living’ as it’s called. I have Luke to thank for my own overnight incarceration in 1983 but I bear no grudge.

Luke himself claims to have used the dice to rule his life for around fifteen years before writing The Dice Man. This was while he was reading philosophies about attempts to kill the self. Apparently, he had no way of knowing where the book was going to end. Which must have been especially liberating.

Today the book has sold several million copies and Luke continues to intrigue fans and journalists all over the world. Including yours truly. Which is why, despite the vague but lovely suspicion that I might not actually be grilling the real Luke or even George, I persisted in interviewing him. 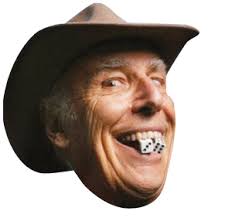 How would you characterise the difference between George and Luke?

George Cockcroft and Luke Rhinehart, pen name of and therefore author of The Dice Man are identical. The many selves of George have some overlap with the many selves of Luke the character in a the novel but are mostly different.

Could you give me a brief overview of how you see the nature of existence?

Existence is filled with chance and folly. Beyond that I can’t go.

Do the writers you list as being important to you in ‘Our autobiographies’ (Nietzsche, Tolstoy, Zen masters, Sufis, Socrates, Montaigne, Freud, Taleb, even the seemingly uncultured Henry Miller’) mean as much to you as they did?

Yes and no. A book or writer will have a big impact upon you at one point and that impact will live on, but in some cases reading the book again will not be helpful, and in others it will still inspire.

(I have to say that I reread The Dice Man recently and spent another night behind bars. I won’t be reading it again.)

How do you feel about your work being approached in a scholarly way?

I have no objections to someone writing about my work in a scholarly way. I myself, coming from an academic background with a Ph.D. in literature, occasionally analyze my own work to see how it is written the way it is. I’d probably be annoyed with most scholarly articles about my work, but might find some exciting to read.

The notion of embracing chance, change and playing is something I associate with the 1960s – in a good way. What do the 1960s mean to you now?

The ‘Sixties’—which lasted well into the early seventies—were quite formative for me. These were fiercely anti-establishment times. The very word ‘Counter Culture’ implies this fleeing from the established way of doing things. Timothy Leary’s ‘Turn on, Tune in, Drop Out’ is a wonderful pithy summary of the spirit of the times.

Today the spirit of ‘Sixties’ at its best doesn’t exist. Political protest is serious without containing any of the playful elements of sixties’ protests—Abbie Hoffman and the 1968 democratic convention, girls giving flowers to soldiers confronting them. I feel young people today are much more firmly enmeshed in the bad things of our culture than the young people back then.

Your view of the nature of existence seems to be very much at odds with today’s idea that it’s possible to have a sense of purpose, which has created a highly profitable purpose industry. Would you say that’s true?

All human beings have purposes and need purposes. What is different about my view of the world and our modern culture’s view is that I find all purposes, all of life for that matter, trivial, whereas most human beings find life and their various purposes extremely serious and important. The super-intelligent aliens who come to earth in my new novel Invasion see seriousness and purpose as a disease that afflicts humans and is causing them to mess up and destroy all life on earth.

Has your love of pranks (like faking your own death) and your willingness to write in different genres prevented you from being taken seriously by the literary establishment?

I don’t think my playfulness has any affect on my not being discovered by the American literary establishment, but my writing in several different genres has certainly affected my sales. I would say almost all commercially successful writers write in one genre, become successful in that genre, and, by continuing to write books in the same genre, create a fan base that follows them book after book. I followed the comic philosophical novel The Dice Man with the short historical novel Matari (now published as White Wind, Black Rider), a deadly serious tragedy about Japanese samurai. How’s that for a change of pace?

I didn’t write another book like The Dice Man until Adventures of Wim (now published as Whim), fifteen years after the publication of my first novel.

I’d also point out that ‘not being taken seriously by the literary establishment’ is true for the U.S. but probably not for the U.K. and certainly not for France.

Do you think we live in exceptionally interesting times or are things pretty much the same as they ever were?

Interesting times indeed. My guess is (and it’s only a guess) that modern corporate-consumer capitalism, which has been triumphant for almost four decades (beginning with the Reagan era) is going to come crashing down from all of its inequalities, debt and paranoiac military follies. The election of Trump, the British exit from the European Union, and the rise of right-wing parties and leader candidates throughout the Western World are a kind of canaries in a coal mine: something is seriously amiss.

What gives you hope? If you have any.

I am far from being in despair. The election of Trump for me, someone who thinks our American system is the cause of much misery for the planet earth, may be a strange step forward toward breaking up that sick system. For me, the anti-Russia feelings of the American establishment are totally hypocritical and dangerous, and thus Trump’s pro-Russia tendencies much healthier than what Hillary Clinton and the establishment wants. He advocates dozens of policies that I hate and will undoubtedly do things that I hate, but unless in his being such a jerk he ends up starting a nuclear war, he will be no worse than the establishment has always been lately.

What motivates you to keep writing?

Only that when I get into a book I enjoy the writing so much. Neither money nor fame have ever been much of a motivation . Books with me just suddenly begin to flow out of me. Or don’t—which is frequently the case. I never force myself to write.

One of the questions I didn’t have the nerve to ask Luke was ‘How do you find the energy to carry on writing at the age of, by my calculation, 85?’ You can see why. It’s a pretty crap question.

But the truth is I find the idea of Luke Rhinehart still writing, still finding life trivial, still being able to write deeply funny books that stay true to his worldview, really impressive. So, even if I have been corresponding with a furry beach ball or a room full of mad old renegades with birds’ nests in their grey beards, I’m glad.

In a world being raped by vicious old men for whom greed, fear and hatred work better than Viagra, with our support – whether actively or through indifference – the idea of Luke Rhinehart is necessary.

I’d like to end with three of George Cockcroft’s ‘Death Poems’, written over the years.

Still, the moon’s not snuffed,

And the frogs still make their din.

Nor threats of hell.

But how I’ll miss the touch

Of snowflakes in the spring.

The air warm against my lips,

Cool in my lungs. Still,

Roll on, George. Or Luke.