Ida Carlsson, Charles Marlow Social Media and Content Manager, tells the inspiring story of how she found creative fulfilment on Mallorca and how she aspires to live a creative life on the island.

After just a few months working in an IT company in Stockholm, I understood that the big city wasn’t really what I imagined it to be. Or maybe it was exactly what I imagined, but it took living there for me to realise I wasn’t cut out for it.

Once I knew that Stockholm wasn’t for me, I started looking around for an escape route.

Previously my partner and I had discussed Mallorca. A professional cyclist, he had been in Mallorca on a training camp with the best cycling team in the world.

And, as a 21-year-old studying at the prestigious Bartender Academy. I had been three weeks in “The Place we Do Not Mention”, as my friend calls it. I didn’t know anything about Palma or the rest of the island, except Maga…, I mean Calvia Beach. In my head, if we were to relocate, I would have to give up my career in web content management and marketing, and instead work in a restaurant. Which I had no experience of whatsoever. Apart from those three weeks of, um, mixology.

My partner and I decided to make our own path on the island. We started a company and began arranging training camps for triathletes and cyclists from Sweden. Initially it went quite well but, as the years went by, we had to compete with big companies like TUI and Apollo who created triathlon travel experiences of their own and with much bigger marketing budgets.

I began taking freelance gigs designing websites and managing companies’ social media channels, which led me into the world of real estate.

For a while, I worked with different agencies started by my fellow country(wo)men. I really loved the versatility, one day designing websites and another out shooting properties or editing photos. And I realised I was using exactly what I’d studied back in Sweden, and then some!

The difference was that I couldn’t imagine the kind of work I was doing being anywhere near as fun, freeing and creatively fulfilling in Sweden as it was in Mallorca.

Rolling back the tape a bit, when I started in photography, I never thought I would ever get paid for it. I bought my first camera back in 2007 when I was 20 years old, a Canon 400D, and it was love at first sight. I used it whenever I got the chance.

While people around me traveled the world, I worked as a telephone operator (the worst job I’ve ever had, I even preferred cleaning toilets in the local hospital) to get money for camera gear. Along with dancing and music, it was my biggest passion.

Before coming to Mallorca, my camera had been collecting dust  in cold and gray Sweden. Inspiration is harder to find when everything looks like a wet concrete wall, even though concrete walls are amazing for portrait backdrops.

Having discovered the special light you find yourself surrounded by here, and with a photogenic boyfriend who needed photos for his sponsors, we headed out every weekend to capture him cycling, swimming or running. I had no idea how to shoot sport, as I was mostly shooting portraits and landscape before.

Through YouTube and online courses I learned and grew and eventually got hired by professional triathlon teams and travel agencies on the island. At the same time, I started shooting properties, which is a different ball game involving super wide- angle lenses, straight lines, and the eternal ‘white balance’ struggle.

But that’s the beauty of photography. Being able to nail sport photos or portraits doesn’t mean you are a great property photographer and so on. There are always things to learn and buttons to discover.

Starting photographing weddings a few years later made me develop my photography skills even more and eventually I got into video production and film making, which is one of my newest hobbies and passions and by far the most expensive. I’ve also been creating YouTube vlogs for my partner’s channel, something I’m exploring with the Charles Marlow team as well. Keep your eyes peeled. 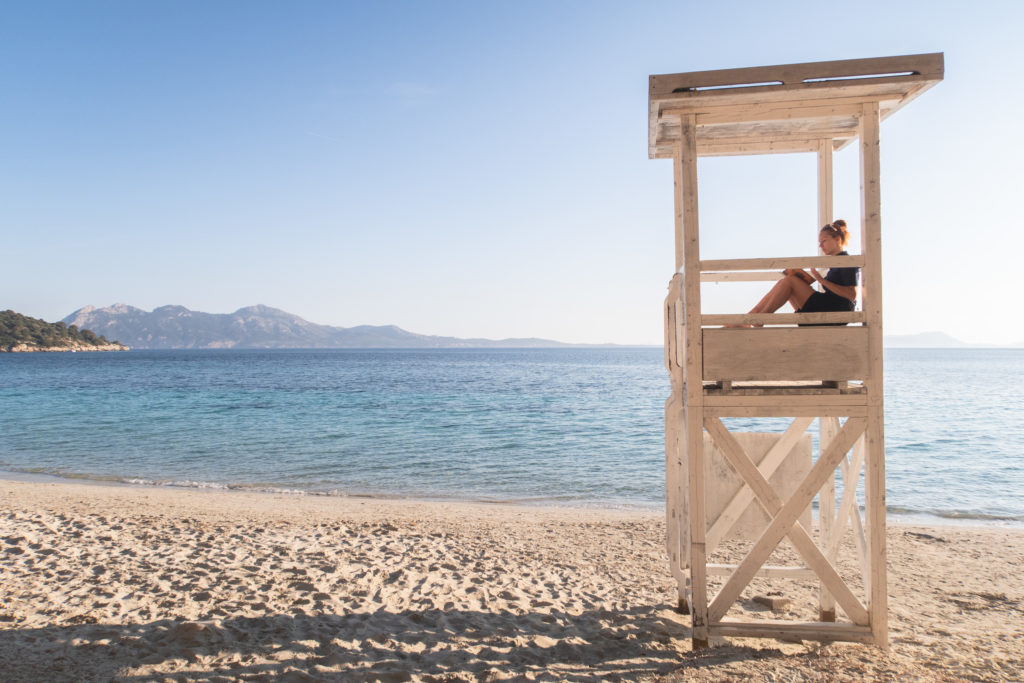 Ten years after I first set foot on the island, I’ve found a work environment on the island where I can do what I love the most. Building a brand with beautiful visuals, story-telling and personal communication. If that wasn’t enough, it’s a team that looks after one another, that cares about the community and working to leave a better world behind us.

I would never have believed I would find a place where I could get use of all my skills, and where this is encouraged by the team. Within Charles Marlow, everyone is invited to set both personal and professional goals and is supported in their journey. I even get to use other creative hobbies like drawing – I made a sketch of the Deià church for fun and we used it for our 2020 Christmas cards.

Now I wouldn’t be surprised if one day I use my music production hobby as well. Maybe I’ll use one of my songs in a property video one day, who knows.

All I know is, Mallorca gives endless amounts of inspiration and only you set the limits of what you can create. You get that feeling of Why not? Why can’t I? Then you set out to at least try.

And I’m not letting modern day branding/marketing clichés like ‘You need to find your niche’ get to me. I’m going to do it all. I’m going to create music, write books, photograph, make videos and paint.

There’s this Swedish expression called being a tusenkonstnär. It translates as ‘being an artist of a thousand crafts’. That’s how I’d like to see myself. Not limited to one craft. Just creating.

If you’re thinking about moving to Mallorca to be your authentic creative self, my experience is that you’re more likely to meet people like you, who don’t fit the mould. People who want to dedicate their lives to creating, to waking up on a Saturday morning with a magical island to explore and attempt to capture in art over and over again, surrounded by an endless sea of possibility glistening before their eyes.