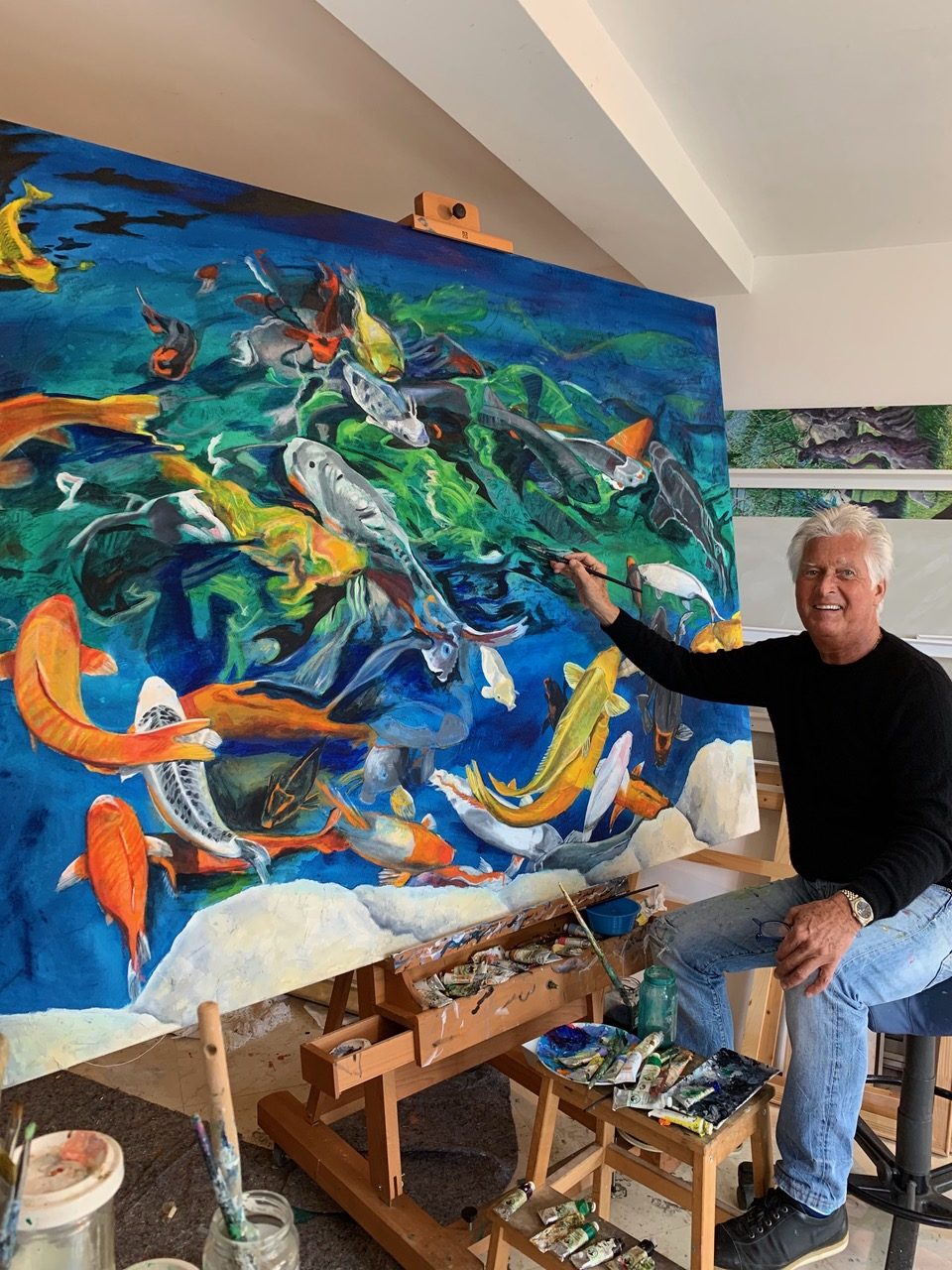 Alan Hydes is one of the artists in residence at La Residencia, A Belmond Hotel, five minutes’ walk from our offices on Deià’s main street. I’d never met Alan but heard a lot about him. I also like to paint for myself, so I was keen to meet him.

Originally from the north of England – like me – Alan is a fine art painter with work in public and private collections around the world, including the prestigious British National Collection.

While working as a lecturer in art in Birmingham, Alan was invited by BBC television to co-present an arts series. He then became an arts reporter and presenter for the UK’s ITV network. Alan’s TV series’ include Painting the Stars, Painting the Past, Blooming Art and, among many, three documentaries about the great David Hockney.

One afternoon not so long ago, I sat with Alan in his studio filled with powerful, vibrant work – completed and in progress – as he told me the story of how he became an artist and a teacher and how he arrived in Deià.

Doing something you really love

Alan began his studies in art in the mid-1960s. At his father’s request, he was studying graphic art to make sure he would be able to earn a living. Sadly, his father passed away just as Alan was about to apply to university to continue in graphics, which he wasn’t especially keen on.

Fortunately, Alan’s supportive mother told him ‘You’re a lovely painter. Do something in life you really want to do. What’s the point in just earning money?’

Instead of graphics, Alan studied fine art at Birmingham College of Art. When he graduated in 1969, he travelled overland to India in a car he’d saved up to buy. Here he spent many months looking at art and painting. On his return, he went to work as a drawing tutor at Birmingham School of Art. That’s when the BBC came calling.

Aged 27, Alan began his TV career. So begins the chapter of his life which ended with him coming to Mallorca.

‘Because I had a TV show,’ he explained, ‘Lots of businessmen wanted their portrait painted by me. One of them had a house in Mallorca. After I’d painted his portrait, which he loved, he invited me to the island. His girlfriend took me on a drive round Mallorca. When we got to Soller, I thought “This is such a beautiful place. The light is fantastic.”  But it was Deiá that blew me away.’

The businessman’s girlfriend was a real estate agent and she showed Alan a house for sale above Cala Deià owned by a German popstar named Chris Roberts. ‘For a painter, the house was just magnificent,’ Alan said. ‘The light, the view, were perfect. The fact that it was in a terrible mess didn’t bother me. I only wanted it as studio. As it happened, I bought the house on a whim in a matter of minutes later that day and my whole life turned around.’

After working in London for a few more years, Alan retired and moved to Deià.

Speaking to Alan, it seems that fortune has smiled on him. Take the story of how he came to be artist in residence at La Residencia.

‘It was 12 years ago, and I needed somewhere to stay while I had my house renovated,’ Alan said. ‘I put a notice up in the village saying I was looking to rent something. The then manager of La Residencia saw it. He knew my work and that I’d been in television. Anyway, he called me up and invited me to come in and talk to him about staying in the hotel.

Alan declined, explaining that staying at the hotel for weeks on end was beyond his budget. The manager explained that he was offering Alan a studio and a room in the hotel as well as all his food in exchange for exhibiting his work and giving painting classes to guests.

‘I said that’s an offer I can’t resist,’ Alan told me. He ended up staying in the hotel for 14 months.

Once the year was over, Alan thanked the manager and explained that he was off back to his house.

‘No, no, no,’ the manager said. ‘We’ve really noticed a huge difference in the hotel because of you being here. You get on so well with people and teach well because you were a university lecturer. We couldn’t have anyone better. Would you stay on as artist in residence?’

Alan graciously accepted the invitation. Ever since then he has spent the summer at La Residencia. In the winter, he very occasionally accepts an offer to work in television but mostly he travels. Mexico is a favourite and a source of inspiration for his art.

‘It’s a pretty perfect life,’ he said. I’d say that was a massive understatement.

Given that Alan appears to live rather a charmed life, I wondered what he found challenging.

‘The biggest thing for me is finding ways to move forward constantly, to push my boundaries. For example, I’ve recently been doing large scale Mexican and Mayan-themed abstracts inspired by my travels. This is totally different from my other work.’ 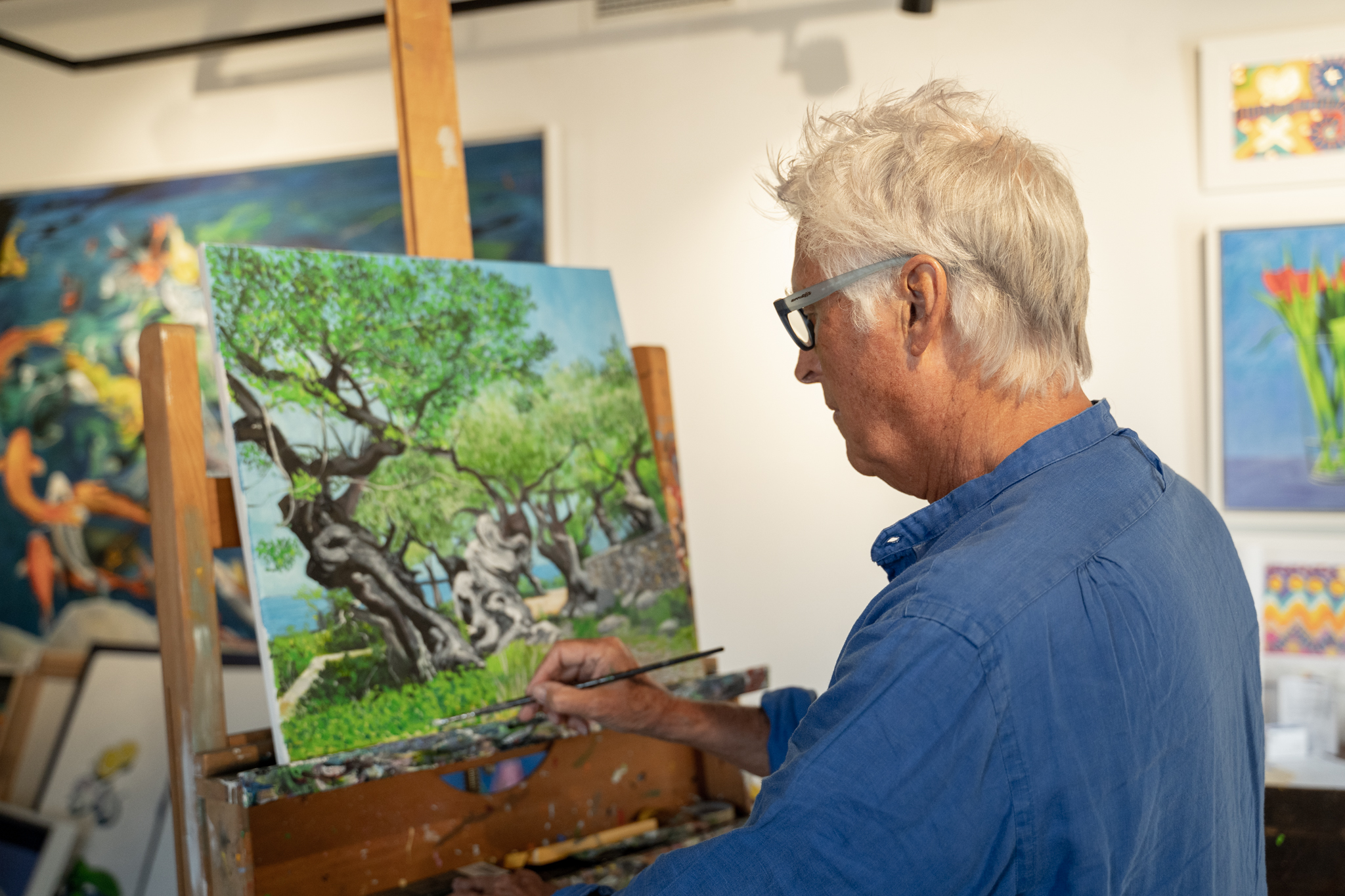 When I asked Alan what teaching meant to him, he told me a story

‘I had one guy, a couple of years ago. I had no idea who he was, but he told me he worked in computers. After we’d finished the class, he said it was one of the best things he’d done in his life. I asked him what he did in computers. He said, “Actually, I invented the worldwide web.” His name was Sir Tim Berners-Lee and he’s one of the most important people on the planet. Later that day, I went for a drink with Tim and his wife. She said, “he’s so excited, this is really going to change him”. That’s just one of the incredibly rewarding experiences I’ve had teaching at La Residencia.’

Today, Alan’s presence is as valued by La Residencia as it ever was.  Current General Manager Thomas Moons told me, ‘Alan adds colour and a bohemian touch to La Resi. He engages closely with our guests, and they have a good laugh with him. He´s been around in Deià for decades and led a very varied life so he has quite a few stories to tell. He is also just a really good painter and teacher, so the results of his classes are often rather surprising!’

For Alan, his connection with La Residencia gives him an enormous amount of freedom and experiences he’d never have imagined.

‘I can paint when I want to paint,’ he said. ‘I can be social when I want to be. And people turn up in my studio I’d never, ever meet under normal circumstances. Leonardo DeCaprio for instance. It’s quite exciting.’