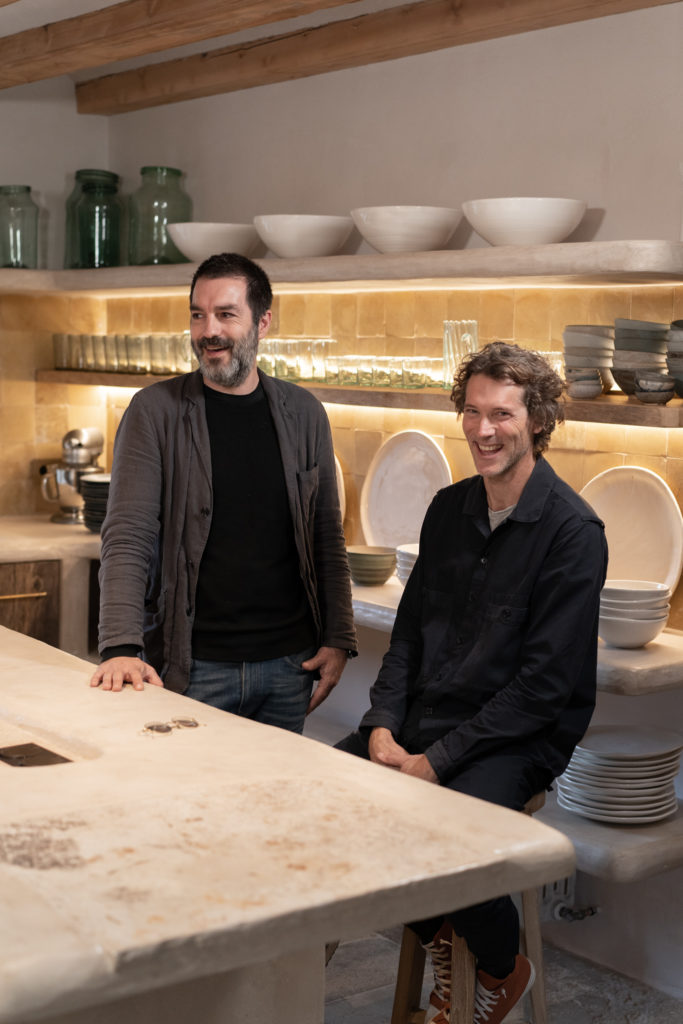 Just before Easter, we sat down with our friends Manuel Villanueva and Oro del Negro, founders of Moredesign, in the kitchen of Can Teix, a renovation project at Cala Deià they worked on throughout 2020.

For Manuel and Oro, kitchens are usually at the heart of the homes they help create, so it was fitting that this was where we found ourselves.

As we sat around an impressive natural stone table, under the wooden beams of the deceptively simple-looking, whitewashed kitchen, with plain yet elegant crockery commissioned by Moredesign stacked on the stone work surfaces, Manuel and Oro told us their story.

When Oro del Negro and Manuel met and became friends over the course of summer 2011 in Deià, they connected through their professions. Oro as a designer with extensive experience renovating homes in the village and Manuel an architect who had worked for major, respected international architecture firms. They also bonded through their deep connection to Deià and Mallorca and shared attitude to architecture and design.

Today, the Moredesign approach to architecture, design, landscaping, and décor has resulted in the creation of a number of highly regarded, much-loved homes in and around Deià and increasingly further afield, throughout the Mediterranean and beyond.

More is also starting to apply its unique, signature approach to projects in the public space such as restaurants and hotels.

Oro and Manuel first got to know each other over 20 years’ ago during a long, hot Deià summer as part of a crowd that hung out at Sa Fonda, the funky bar in the centre of the village, and on the beach.

One summer, when Oro had a renovation project that required architectural input, he invited Manuel to get involved. Working together, they realised they shared an approach and philosophy.

In 2012, Manuel moved to Deià to live permanently for family reasons and they landed their first project, renovating a house in the village named Can Anita for fashion creative director Yasmin Yusuf.

Working together on Can Anita set the foundation for an approach to architecture and design that continues today. Manuel, as he says, ‘used a contemporary approach to opening spaces – Can Anita originally had 10 rooms – within a traditional framework. Oro used his knowledge of traditional processes such as the Moroccan plaster tadelakt, learned from previous renovations. They also worked with innovative, high efficiency technologies including aerothermia.

Aerothermia uses a heat pump that absorbs heat from outside a structure and releases it inside and is, in essence, an air conditioner in reverse. 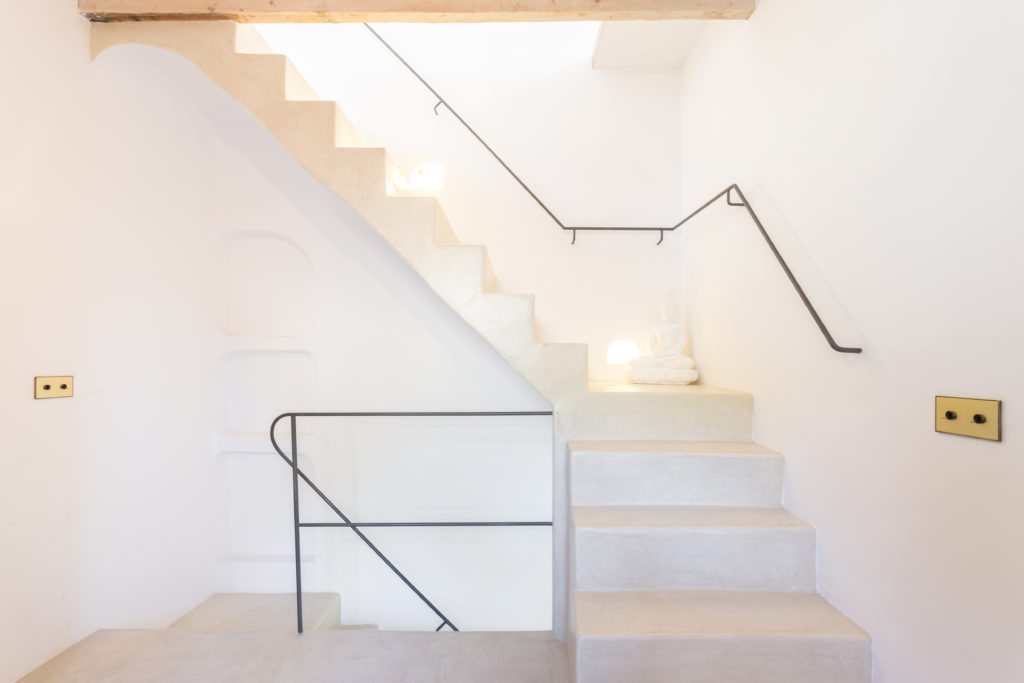 Can Anita was featured in a number of international design magazines and created a word of mouth buzz. As Oro said, ‘It was a beautiful exercise and the very beginning of experimenting with craftsmanship and paying attention to every little item. In a sense, it was the first expression of what has become our signature.’

The project also demonstrated Manuel and Oro’s determination to work as holistically as possible. The landscaping of Can Anita had been neglected and More insisted they would handle this too.

Can Anita also embodied Manuel and Oro’s desire to never work for anyone else in their lives again. ‘We were super-focused on creating something for ourselves,’ Manuel explained.

‘It was a perfect marriage. We combined so many strengths that it made total sense,’ Oro added.

For a number of years from then on, More was commissioned to work on an average of one project a year. Recently, as Oro said, ‘It’s become a rollercoaster ride.’

In essence, More is about combining the traditional and contemporary while working with local craftsmen and materials in a way that is timeless. This extends forwards in time as well as backwards. ‘We’ll look to homes that are 300 years old for inspiration, but we also want the homes we design to retain their beauty 50 years in the future,’ Manuel told us.

More combines Manuel’s formal training with Oro’s less conventional approach. ‘In a way, we’re like a jazz band,’ Manuel said. ‘We’ve created some standards that we practice, practice, practice but then we allow free style and that’s where the magic comes from. I love the way Oro’s vision of architecture is that of a child having fun in a house. That’s of enormous value. You can think freely. Oro also taught me that houses need to be sexy.’

The fact that Oro and Manuel grew up in the Mediterranean is also important. They’re not interested in creating generic luxury homes that could be dropped into places like Dubai or Hong Kong. They feel obliged to share values such as the centrality of family and cooking and to manifest this for clients in the homes they help create, particularly when it comes to kitchen design. And they want clients to feel the materiality of where they are, to tap into nature, feel the sea, feel the pines, to, as Oro said, ‘transcend the project and connect with the beauty of this place.’

This somewhat unconventional approach to forming relationships with clients extends long after a project is finished. ‘I was recently at a home we’d worked on,’ Manuel said, ‘and the client asked me why I was still visiting three years later. They jokingly wondered if it was in their contract.’

Kidding aside, this speaks to the sometimes intense relationships that can form over the duration of a project. Clients become friends. As they go through good and bad times, bonds are created. Manuel and Oro have had clients burst into tears of joy when they cross the threshold of their new home because More has exceeded their expectations.

Despite the fact that a Moredesign project might take a little longer and cost a bit more, it’s always, as Oro said, ‘golden and will never be forgotten’. More always delivers on time and on budget.

Learning from the past while looking to the future

One of the most endearing and enduring aspects of the Moredesign philosophy is the attitude to learning from the past.

Manuel and Oro are fascinated by ancient techniques such as using potato peelings as a kind of glue, but they stress that they aren’t interested in replicating such techniques purely to create an aesthetic. It’s more about respecting the fact that ancient builders used what they had.

When a house was built in Deià hundreds of years ago, a hole was dug in the ground and the stones that were hauled out became the walls. Local wood was used because, well, it was local.

And, as Manuel explained, vernacular architecture is actually the result of learning from failures over centuries. ‘Look at the black beams you see in old homes,’ he said. ‘The wood is coated with pine oil because the people who built the place knew from experience that it protects against termites.’

This attitude towards practicality and functionality extends towards conservation for the future. From the very beginning, Manuel said, ‘Oro was telling everyone when they’d just bought a house that they had to create an orchard, that they should learn how to use water wisely.’ 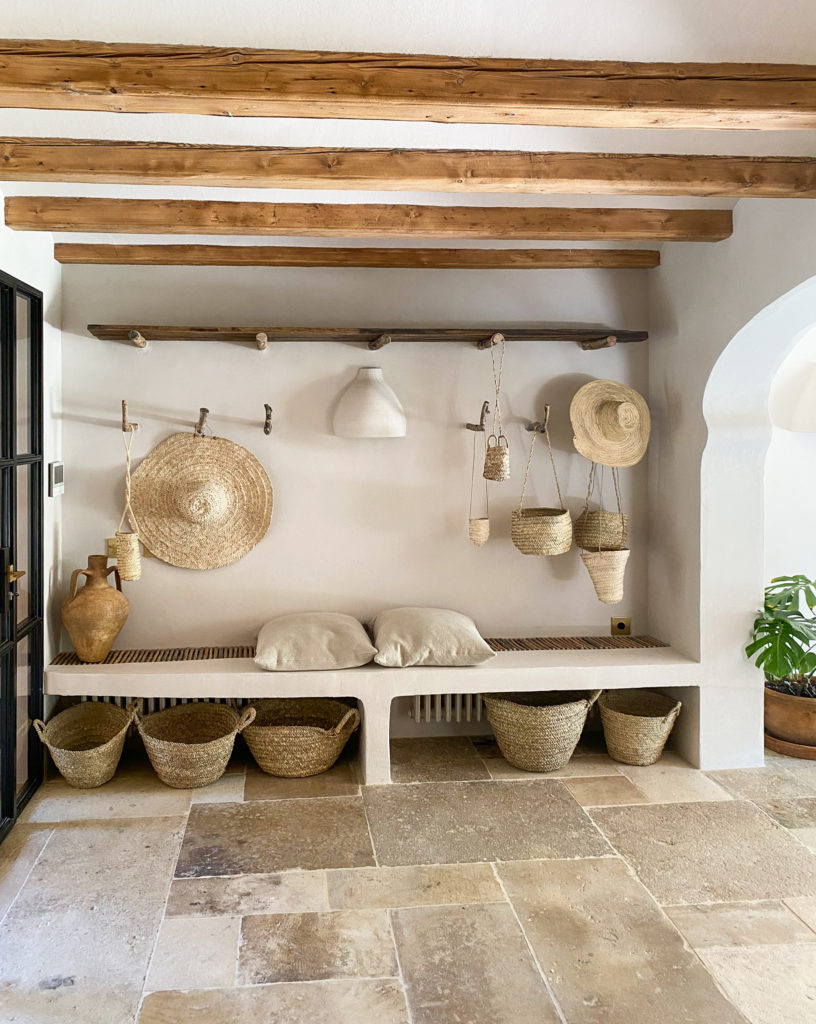 Leaving aside the fusion of traditional techniques with a contemporary approach and smart use of technology, one of the secrets to More’s success is the fact that the firm has such close connections to Deià – is part of the village, really.

Oro admits that, when he was growing up here renovating houses, him and his mother were like gypsies moving from one house to the next. These included one of the oldest houses in Deià where, Oro remembered, ‘you went through a little door in the wardrobe and came out in the mezzanine. It was like being in an Escher painting, a strange puzzle.’

This deep knowledge of the village is enormously beneficial to clients. Moredesign has also had to learn how to work with a legal system that can be byzantine to enable clients to achieve their vision legally.

‘Being aware of the law almost becomes a subconscious process when we’re designing,’ Oro said. ‘But we obviously respect this because the beauty of Deià is partly a result of all these laws.’

This is more important now than ever before as new people come to the village. But Oro and Manuel are optimistic about the future.

‘The people who are coming tend to be from creative industries so the heritage of the village – its history as a place that appealed to painters, musicians, writers and other creative types – is part of what attracts them,’ Manuel said. ‘And, even if they’re buying as an investment or for business reasons such as opening a restaurant, there’s still an element of curiosity and desire to connect with that creative feeling.’

Being so closely connected to the village, Manuel and Oro are also well aware that they have an obligation to support it and its community however they can. ‘By offering work to builders, craftspeople and so on, we’re doing our best to give back. After all, we live here, our kids go to school here, we buy our bread in the village,’ Oro said. It just makes sense.

As well as giving back, Moredesign is also bringing new blood into the village that is part of the vibe of creativity and professionalism Manuel and Oro want to encourage, along with an appreciation of the environment in which Deià sits.

This is all part of re-imagining the village as a hub. ‘Deià is no longer an isolated place,’ Manuel said. ‘We have to think about that and take it further. That’s the way the village can evolve and not just be a dead town with houses that are empty half the year. Recently we advertised for someone to join our team, which now numbers 15 people including us, and got hundreds of applications from all over the world from people wanting to work with us. That’s exciting.’

Local interior design and the future

As its team grows and it moves into other areas such as More Decor, which works with textiles, upholstery, furniture and fixtures and fittings, Moredesign is also expanding its reach.

Manuel and Oro are increasingly taking on projects in different parts of Mallorca, including urban housing in Palma, as well as in Ibiza and further afield in locations that include other parts of Spain, Sicily, Mykonos and the Caribbean.

More is also being invited to work in public spaces such as restaurants and hotels. But, although the challenges are different, the firm’s principles remain the same.

‘We look at the technologies and traditional approaches we can apply and how we can use materials that don’t have to travel too far,’ Manuel explained. ‘So, for example, if Moredesign had been born in, let’s say, the tropics, our DNA would be the same.’

Moving into different kinds of architecture and design has also not blunted More’s appetite for questioning received wisdom. ‘We’re doing our first hotels now,’ Oro said. ‘Our background gives us an interesting take on a public project because we don’t want to look it from a public perspective. We’re coming from a humble, family way of doing things. For us, public spaces are like a huge living room, a way of sharing space. Our vision is unchanged from what it was in the beginning.’

Ultimately, Oro said, ‘Our goal is to open the door to people being able to live a different life.’

‘We want to change the way people think about spaces,’ Manuel added, stroking the wonderfully smooth surface of the natural stone table.