Embracing the timeless hippy way of life in MallorcaMarch 31, 2017

Fifty years since the first Summer of Love in 1967, the spirit of hippy is alive and well in Mallorca and still changing the consciousness.

On 1 June 1967 The Beatles released Sgt. Pepper’s Lonely Hearts Club Band. Not long after the album came out, a club with the same name opened in El Terreno, Palma de Mallorca. Thinking about Sgt. Pepper’s, the club and the album, got me wondering why Mallorca is just so hippy.

Before we go on, let me define what I mean by ‘hippy’. Especially as many people who lived through the 1960s in what you might call a hippy fashion bristle at the term. Leaving aside the clothes, drugs and psychedelic music, I’d say being hippy is as simple as believing in the values of peace and love.

From the mid-60s onwards the music coming out of California set the sun-drenched tone for at least the rest of the decade. Eastern ways of thinking and being, popularised by The Beatles, permeated the culture. The only problem was that, for most of European youth, California and India were light years away. But the Balearics weren’t.

Since at least the late 1950s, Mallorca and especially Deia had been way stations on a kind of Balearic version of the hippy trail that took in the South of France, Cadaques – home of Dali – Ibiza and Formentera. From the early 1960s onwards, Deia was home to musicians who were an integral part of London’s counterculture like members of the Soft Machine. Pink Floyd famously recorded in Formentera. The records these bands made were often as sunny as they were strange.

One of the most remarkable musicians, whose name I’ve never seen mentioned anywhere, is Theo von Ranke, who called himself the Mushroom Universal Guru. Von Ranke arrived in Deia in the summer of 1967 and, for a time, lived in a cave which can only be reached by climbing up a rock face, clearly visible from the road that leads down the cala.

I’ve spoken to a few people who remember von Ranke appearing at the mouth of the cave. Long-haired, bearded and wearing white robes, he serenaded bemused tourists and Deia villagers with his peculiar songs, accompanying himself on a homemade musical instrument that looked like a mushroom with strings. Most of von Ranke’s songs were celebrations of the transformative power of mushrooms. Apparently, one song was called ‘Fungal Omniscient Om Legends Equalling Divinity’.

Von Ranke’s obsession with mushrooms was, of course, shared by Robert Graves. Graves’s mother’s maiden name was von Ranke. I’ve been told that Theo claimed to be related to the great poet. I have no way of knowing if this is true or not as Theo vanished at the end of the summer of 1967, leaving no trace that he had ever been here apart from some hazy recollections.

It is rumoured that a recording exists of Theo van Ranke’s mushroom music musings but I’ve yet to meet anyone who has a copy.

Stepping back onto more solid terrain, I’ve written before about the connection between Mallorca and the London counterculture that resulted in Jimi Hendrix playing in Sgt. Pepper’s club in July 1968. More than one Mallorquin musician has told me they saw

him there. He blew their minds.

So, you could say that Mallorca itself helped shaped the music that became part of the hippy soundtrack – not to mention the modern Balearic sound. But there’s more to it than that.

Hippy in the air

Back in 1997, there were still wonderfully funky little bars in Palma like El Globo, a tiny corner joint in Carrer delsApuntadors in La Llonja. Somehow, El Globo managed to stay open until sunrise. And all night the soundtrack to whatever we got up to relied heavily on The Beatles, Hendrix, Pink Floyd, the Grateful Dead, Santana and other stuff I’d once have sneered at for being way too hippy.

But it was perfect for a hot summer that lasted until the end of October. Only laidback music felt right. And this, I think, is my point. There’s something intrinsic to being in Mallorca that turns many of us hippy, whether we like it or not.

By 2007 I’d been on my first spiritual retreat on the island. I was devoted to yoga, had stopped drinking, become vegetarian. Perhaps most hippy of all, I’d come to believe that this life really was about all about peace and love. Because what else was there? Hate and war?

It was living in Mallorca that did it. And I’ll be forever grateful.

As a look and a lifestyle, hippy never went away in Mallorca. It just got much more expensive. So, is ‘neo-hippy’ as a recent Guardian piece called it, just about expensive versions of 1960s tat, designer crystals and a narcissistic preoccupation with one’s inner self?

Leaving aside the fact that the original hippies were themselves rather elitist, I’d say that ‘neo-hippy’ in Mallorca means doing rather a lot of tangible good.The people I know on the island who are on a spiritual path, man, are very aware of their responsibility to do what they can to make life better for others. Because, in my experience, the minute you begin the work of expanding your consciousness, or at the very least simply trying to make sense of things, you become aware that modern life is pretty wrongheaded.

One of the people on the island who I’d say embodies the original spirit of hippy is my friend Daniel Alzamora-Dickin, who has resided in his off the grid studio between Deia and Soller for the past eight years. I wish you were Daniel’s Facebook friend. Every time I watch him playing some weird instrument or just wandering around cogitating on the nature of existence it puts a huge smile on my day.

I asked Daniel how he’d describe himself.

‘I am a civilization of universal love, trillions upon trillions of cooperating cellular constituents whose mission is the unification of the inner and outer, so that planetary economics reflects internal microbiology’ he told me.

He continued: ‘I am a Universal Self, the realization that the “me” only exists in observing and FEELING my effects upon my local environment and the diverse beings I share this planet with. My identity is rooted in the actions I will be held accountable for when my soul exits this dimension and faces its Creator, whom I serve with universal love and universal truth as well as the eradication of self-deception. I am a cosmic and comedic instrument of sacred frequency and my music, vibracusonic massages, video art, interactions, writings and culture reflect the conscious intent to inhabit, not just my own perspective, but our shared experience to activate our collective ascension. I do not identify with words, concepts or conditions.’

Daniel is a great example of the illustrious hippy lineage of Mallorca.

‘My uncle in law Owen Good discovered Deia in the late 60s during his adventures with my aunt. I first came to Deia in my father’s “cesta” a traditional Mallorquin woven bag (the locals chased him out for his Messiah complex). My parents had just come from Peru through Morocco to have me in England. My aunt living in Deia brought us here and since then (1973) we have been coming to Deia. I remember as a boy being around Robert Graves, Mati Klarwein and the wild Deia night life. At five-years-old I learned how to write at the Deia school with Don Jaume (one day we followed him on lunch break into the olive grove and saw the other side of the mountain in total flames!). I would return to Deia in the summer breaks as my school year was spent in Florida. After 14 years in New York City studying the healing power of music, clinical massage therapy and Liberal Arts, I moved to Mallorca.’ 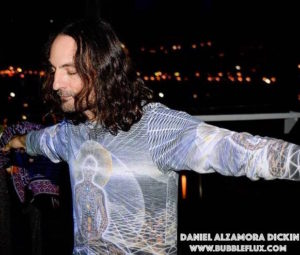 I, for one, am grateful that you did and I got to meet you, Daniel.

I’m travelling in Switzerland at the moment and missing Mallorca. I find that when I play music from the Balearics I’m immediately transported back to the island. This absolutely wonderful Spotify playlist adds up to over a day’s worth of music to soundtrack a spring day in Mallorca. Or if like me you’re not lucky enough to be here right now, to make you very wistful.

If you don’t have Spotify, the ultra-mellow Chris Coco who put this playlist together is involved with Balearic Records. Their compilations are well worth getting your hands on.