Romantic Deia and the worship of loveFebruary 10, 2017

Like you perhaps I have many intensely romantic Deia memories. But is the village inherently romantic or is it just us? 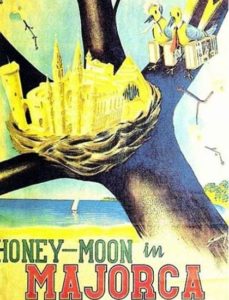 For northern Europeans, there’s always been something romantic about just being in the Mediterranean. Last year’s reality, ahem, Love Island TV series was only the most recent manifestation of our love affair with Mallorca itself. The mainland Spanish associate Mallorca with amor too but for rather more prosaic reasons. One of my first Spanish friends on the island told me that there were more Spaniards conceived in Mallorca in the Franco years than were born here.

Apparently, after Franco had helped decimate the Spanish population he increased it by rewarding citizens for having children. As I understand it – and I have an unbeatable ability for garbling facts – the growth of Spain as a tourist destination in the 1950s has something to do with the fact that the infrastructure was already in place. This was partly because Franco’s reward for fulfilling one’s patriotic duty to have more children was a free or subsidised holiday to Mallorca.

Once in Mallorca, Spanish people succumbed to the amor in the air along with everyone else.

(I’m sure the essence of what I’ve just written is true but I’d welcome being put straight.)

There’s no question that the beauty of the landscape lends itself to romance. One of my favourite places to sit and just gaze into space is in the tiny cemetery behind the church. Here it feels as if the air is worn thin and it would be so easy to float off into another time, another life.

So many of these other lives were spent in the pursuit of an ideal of love. Robert Graves, who symbolises romantic Deia for so many of us, believed the village church was originally the site of a temple to Diana, goddess of love. You can’t get more romantic than that.

Graves championed love and worship of the goddess as the only true subject of poetry. His attempts to scale the highest pinnacles of romantic expression influenced many other writers, not least Bob Dylan. Graves’s pursuit of his muses is sometimes silly but always noble.

After Graves came countless artists, writers and musicians who celebrated their own muses. The woman I followed to Deia had lived here in the late 1960s and early 70s. Her stories of tumultuous affairs, of contests between property barons and penniless rock and rollers for the hearts of magical women have shaped my vision of romantic Deia for good.

When I came to the village with the second and, I pray to Diana, last great love of my life, I was curious to see how she responded to the village. She fell for romantic Deia in a heartbeat. I felt proud to be a small part of a long, strange but tender lineage. 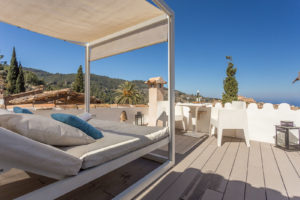 Casa Mestre has a terrace and hot tub perfect for sipping champagne under the stars.

The terrace of Can Maroto has delightful views of the village and the sea, and is perfect for an intimate dinner for two.

Behind the secluded pool at Villa Alconasser is a secret spot where you can curl up together and watch the sun set behind our breathtaking coastline.

The views from the swimming pool at El Niu are wonderful, especially as the sun goes down.

Stylish Son ‘Or is ideal for a romantic getaway at any time of year.

We’d love to help you fall in love with Deia. If you would like to find our more about any of our properties please contact the team. 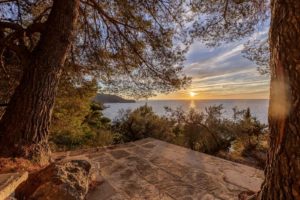